Modern Loss is a place to share the unspeakably taboo, unbelievably hilarious, and unexpectedly beautiful terrain of navigating your life after a death. Beginners welcome.

This project grew out of two friends’ separate experiences with sudden loss, and their struggle to find resources that weren’t too clinical, overtly religious, patronizing or, frankly, cheesy.

What you will get here:

• Diverse personal essays from diverse people who have experienced all kinds of loss
• Resources—from probating a will to respectfully getting your loved one #off social media
• Creative ideas for exploring your own loss
• Links to relevant articles about thriving in the face of grief
• News about projects we think you’ll love
• Lots of ways to connect with other people who just “get” it
• IRL Modern Loss events. Because misery loves company, and nachos. And margaritas.
• Info on our books – The Modern Loss Handbook: An Interactive Guide to Moving Through Grief and Building Your Resilience and Modern Loss: Candid Conversation About Grief. Beginners Welcome.

What you won’t get here:

• Judgment
• Tips to help you “get over” or “get past” it
• Anything associated with the idea of a “valid” loss. If you feel it, it’s real.
• The phrase “Everything happens for a reason.” Just … no.

Rebecca had always primarily associated the word “orphan” with waifish Charles Dickens characters. But when she was 30, her mother Shelby, was killed in a car accident, one hour after dropping Rebecca off from a family camping trip to the Adirondacks. Four years later, her father died of a heart attack while on a cruise to the Bahamas. Lucky him, unlucky everyone else. Suddenly, she was actually an orphan herself.

So much loss at such a relatively young age un-tethered Rebecca. There were husbands yet to meet, puppies yet 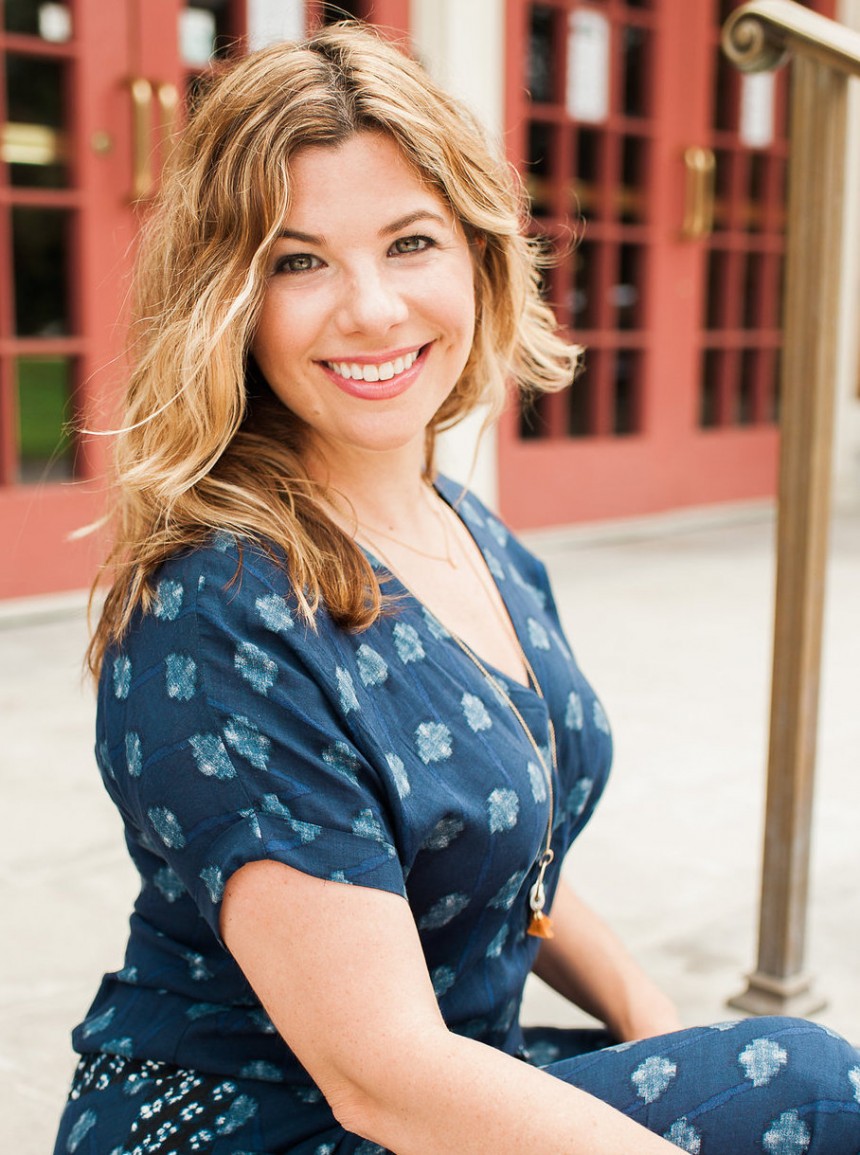 to adopt, and so many other miles yet to stone—but all of it would have to be done without her own parents’ guidance, along with dealing with the logistical aftermath of each of their deaths. Dear reader, it was bad.

But she wasn’t alone. Together with Gabrielle and some other friends, Rebecca formed a monthly dinner party called WWDP (Women With Dead Parents, obviously). The WWDP conversations were wide-ranging, but the common denominator was a shared understanding. A general “I get it.” No apologies, no accusations, no questions asked. Other than: Who brought the chocolate cake, and can I get the recipe?

Because if Rebecca couldn’t have parents, dammit, she could at least have chocolate cake—not to mention friends who understood the particular nuances of going through profound loss way before they expected to.

With Modern Loss, Rebecca hopes to bring that refreshing openness to a broader audience, and community, who could use their own place setting at the table of loss.

Rebecca has been a lifelong organizer of communities, both public and private. From getting her masters in journalism from Columbia University, to accompanying Stephen Colbert on a Peabody Award-winning quest to get to know all 435 U.S. Representatives, to helping to grow a leading network of Jewish creatives, Rebecca has always found strength in numbers, and bringing those numbers together. She has contributed pieces across media, including TIME, NBC Think, The New York Times, Marie Claire, Refinery29, Elle Decor, and Tablet Magazine’s podcast, Vox Tablet; has been featured on CBS Sunday Morning; and has spoken at Chicago Ideas Week, Amazon, HBO, and Experience Camps‘ annual benefit, where she was its 2017 honoree. She has also led Modern Loss retreats at Kripalu; keynoted for several organizations, including Good Grief and Capital One; and is known for putting her special touch of levity, depth and a bit of comfortable weirdness on Modern Loss’ live storytelling events.

Rebecca lives in New York and the Massachusetts Berkshires with her husband, two little boys, and labradoodle. Keep up with her on Twitter @rebeccasoffer, where she regularly tweets at 3 am because she barely sleeps these days (see the part about the two little boys). Contact her for speaking engagements, press inquiries, to book a live storytelling event, and more at rebecca@modernloss.com.

GABRIELLE BIRKNER, Cofounder/Executive Editor
Gabrielle got her start in journalism writing obituaries for a local newspaper. She was 24 and in the newsroom doing that very job, when she found out that her father and stepmother had been murdered during a home invasion.

One minute, she was writing about death at a remove. The next, she was coping with the sudden, violent deaths of two of the people closest to her: planning their double funeral, cleaning out their house, communicating with police and prosecutors seeking justice on their behalf.

For months, she would cry to anyone who would listen: close friends, acquaintances, the sales clerk at Staples, telemarketers praying she’d just hang up already. The pain was so great, and the burden of living in its midst so heavy.

Relief came from finding camaraderie in others who had also experienced loss. She joined a support group in Manhattan for families of homicide victims and became involved with a national nonprofit dedicated to supporting family and friends of those who have died by violence.

Gabrielle is an award-winning writer and editor, who is currently a story editor at Chalkbeat. She was previously managing editor at JTA, director of digital media at the Forward, and features editor at The New York Sun. She writes regularly for national newspapers and magazines; you can check out her work here. She is also a proud Northwestern University alumna.

Jennifer Richler is a freelance journalist living in Bloomington, Indiana. She writes about a range of topics, from grief and loss to Israeli culture to autism. You can find her at jrichler.wix.com/jrichler.

Mathew Rodriguez is a queer, Latino New-York based journalist. He is an editor at TheBody.com and a former staff writer for Mic.com. He is currently working on a memoir about his father, heroin addiction and HIV on New York City’s Lower East Side.

Julie Satow is a freelance journalist who writes primarily about real estate for The New York Times. She lost her brother to suicide when he was 20 and is a board member of The Jed Foundation. She’s currently working on a book about The Plaza Hotel. You can find her at juliesatow.com.

Leslie Gray Streeter is a columnist and reporter for the Palm Beach Post, living in West Palm Beach, Florida. Her first book, a memoir about losing her husband Scott in 2015, is called Black Widow (because she’s black and a widow and it seemed clever at the time) published in February 2020.

Eric Meyer has been a burger flipper, a college webmaster, an early blogger, and more. In 2006, he was inducted into the International Academy of Digital Arts and Sciences for his work to “inform excellence and efficiency on the Web.” He is CTO at Rebecca’s Gift, a non-profit established in honor and memory of his daughter, and co-founder of the interaction design conference An Event Apart.

April Rinne is an advisor to startups, governments and investors worldwide, a Young Global Leader at the World Economic Forum, and an inveterate globetrotter (100+ countries). She also lost both of her parents in a car accident when she was in college. Her experience with grief and loss has had a profound impact on every aspect of her life and work—from her irrational-but-very-real belief that she didn’t have long to live throughout her 20s, to her anything-but-typical career path—and she’s thrilled to support Modern Loss as it reaches an ever bigger community in ever more ways.

Dr. Dan Wolfson is a licensed clinical psychologist specializing in the field of grief and loss. He is the Mid-Atlantic region Clinical Director of Experience Camps for Grieving Children, and a researcher at Columbia University’s Center for Complicated Grief, where he completed his post-doctoral fellowship and received advanced training in the highly effective modality of Complicated Grief Treatment (CGT). Dr. Wolfson currently works with adolescents and adults at Rennicke & Associates in downtown Manhattan, and he is also an adjunct clinical supervisor for the City College of New York and NYU Center for Counseling.