My Guide to Finding Love After Loss

A totally conventional and easily followed roadmap to emotional transition, by the widower of ‘The Bright Hour’ author. 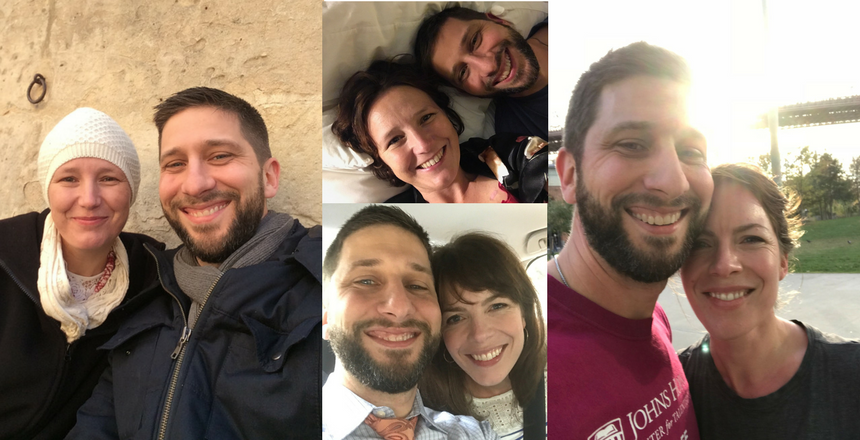 One of the hardest things about losing my partner was the actual fact of being bereft—existing without my person. After all, one great intimate relationship is hard to find, let alone two. And though I wasn’t even ready to begin trying, the thought of rediscovering that sort of romantic connection, especially through the specter of “dating,” loomed large for me even when my loss was in its early days.

My late wife Nina and I had talked about it a fair amount during the last year of her life, when we knew her cancer was terminal. She even made me promise her I’d marry again. But the overwhelming reality of grief clouded the clarity of that deathbed promise. The idea of a new relationship, even as a future goal, gave me a feeling in my chest akin to what I’ve always imagined 16th century navigators must have felt their first time at sea—sure, they’d learned the math and charted the course according to plan, but now, on the deck of a tiny ship in a great big ocean? Gulp. The prospect of massive seasickness for months on end was the least of my worries. Wait, Tinder? Nossir. Drinks with strangers after 18+ years of drinks with my one true familiar? Hard pass. In reaction to these helpless feelings shortly after Nina’s death I wrote a mock personals ad to laugh about the absurdity of me coupling up again:

I obviously didn’t publish it, saving some poor classifieds editor serious heartburn. But the recipient of my gallows personal ad was my new friend and pen pal Lucy, like me a recent widow whose spouse died shortly before publishing a memoir. She was also a couple widow years ahead of me and seemed – at least outwardly – to be emotionally intact. “Lucy is someone you should really contact after I’m gone,” Nina suggested. Though Nina only knew her through a brief email exchange, she could tell from Lucy’s very public response to similarly trying circumstances of loss, that we all shared a set of values on marriage, death, and loss.

As I had hundreds of times beforehand, I followed Nina’s advice, and Lucy became my unofficial grief sponsor before (spoiler alert!) eventually becoming my IRL-LTR girlfriend.

“Maybe the most important thing that helped me…be open to the possibility of new love was talking about it with Nina before she died.”

When I sent the ad to Lucy , neither of us had any inkling that our own relationship was brewing. I don’t remember Lucy’s immediate response, but many months later she said she would never forget it, that my “ad” was one of the first signs to her that, despite the rawness of my grief, I was keeping my bearings, or at least my sense of humor. Nothing could have seemed farther away. I’d been resistant when Nina broached the topic. Not that I didn’t see her point, but I was deeply immersed in my last days and weeks with her. After she died, I was thoroughly overwhelmed by loss. I promised, of course, but for the life of me anything much beyond knowing the spot to inter her ashes—an obvious family spot where we’d bury her mom’s remains too—and vague plans to avoid talking to my two boys through the plexiglass shield of the county jail where I see clients seemed remote and abstract. In spite of that, Lucy and I found one another—and love—far earlier than I would have ever planned.

But man plans and love laughs? We may not have been ready, but it happened. And maybe the most important thing that helped me (and Lucy, whose husband, Paul, died two years before Nina) be open to the possibility of new love was talking about it with Nina before she died. Of course, this is a luxury for some: Widowed folk don’t always get the chance to ease into mortality. And even those, like me, who do get the benefit of advanced planning, might never raise it at all. But Nina was adamant about talking through everything. Partly she wanted to know that things would be ok when she was gone, partly it was just her way, regardless of cancer. Nina was raised by an emotionally astute, assertive mom; on her dad’s side everyone is some sort of hyper-competent sea captain manqué. She ran a pretty tight relationship.

A year on, I’m so grateful Nina forced the issue. Of course couples should be talking about this—shouldn’t couples be talking about all their most important issues together? What would/could/should life look like? What are our hopes and dreams? Nina and I kept having those conversations, even knowing she wouldn’t be there to experience the answers we discussed. She knew I’d need to go on. As Nina’s muse Michel de Montaigne would say:

“Were death an enemy that could be avoided, I would then advise to arm oneself even with cowardice itself …” but since we all face the same mortality, let us deprive death “of the greatest advantage it has over us … [l]et us disarm him of his novelty and strangeness, let us converse and be familiar with him, and have nothing so frequent in our thoughts as death.”

Lucy and I began to have feelings beyond grief coach/shattered supplicant pretty quickly after our first exchange. But we were both oddly prepared. We didn’t just have the radical permission of our spouses to search for new love after their untimely deaths. We had a form of advanced planning that no doctor or estate planner will ever raise, but one that I found crucial to my happiness and survival.

Thinking all this stuff through on the early side also ended up helping me to manage a bizarre new form of cognitive dissonance: The co-existence of two separate, deeply profound, intimate relationships. It’s incredibly odd to actually feel, yet something any widowed person seeking new love must contemplate: How do you manage the relationship to your new person while simultaneously learning how to have one with the original one? Because while loss may cut off your physical interactions, it couldn’t possibly end your relationship, even if you’d somehow wanted that. When you go to bed at night, that bed might be the same one you shared with your dead partner. When you think about intimacy, love, passion, or relationships, you’ll think of your late person. When you make decisions about work, houses, schools, pets, friends, and family, even which TV shows to binge, you’ll be contemplating deeply shared investments and interests. And when you talk about the person you lost, you’ll invariably be invoking them in a way that harks back to your shared emotional space and your life together.

At the same time, if you have a new relationship, you’re going to be doing ALL THOSE THINGS with that new person, too. Only differently, because added to that will be navigating a relationship, doing things you may not have done in years: Getting to know one another’s quirks, habits, likes, dislikes, turn-ons, neuroses, and contradictions. Deciding who washes and who dries in the new relationship economy. Patiently teaching your new partner how to load a dishwasher. Or being patiently taught the Silicon Valley concepts of block-chain and crypto-currency. It’s a lot to manage.

“The good news is…you can also manage two loves, living and dead. It just takes unflinching careful attendance to the fact that both are happening simultaneously.”

And then, of course, there’s that beautiful experience of being swept up in the emotion of new love, a phenomenon in itself. How do you keep that separate from lost love, so as to honor your ongoing relationship, while protecting your new love from feeling slighted or confounded with it? For me it all comes back to Montainge and Nina.

Because, whether we admit it to ourselves or not, we are straddling both life and death the whole time we’re alive. We have no choice, except in how we frame it. The good news is, if you can do that, you can also manage two loves, living and dead. It just takes unflinching careful attendance to the fact that both are happening simultaneously. I have never felt like my relationships with Nina and Lucy have impinged one on the other. They interact in a thousand ways, but we are constantly making ourselves aware, in the same way Nina wanted me to be aware of my incipient need for a future relationship while we still shared the same bed.

So my keys to a healthy transition from loss to finding new love? Talk openly about death, preferably with your spouse who is writing a memoir about her own terminal illness and then with your future girlfriend—even before you know she is going to be your girlfriend—whose late husband also wrote a memoir about dying from cancer and who speaks regularly on the subject of death and dying, palliative, care, and other issues attending the loss of an intimate partner. If you can manage that, you’ll really have a leg up. Then all you need to do is be hyper vigilant and tend to both relationships, allow yourself plenty of space to feel all the feelings, which are sometimes contradictory and strange. And there you have it. A roadmap to post-loss emotional and romantic success. Easy peasy.

But if I strip away the fortuity that enabled me to find love after loss, what’s left is an openness in the ways we talked about death and grief long before they were established facts, which also left me open to the possibility of forming new love that ensued. Building some sort of vulnerability carapace out of the very stuff it’s designed to protect from the onslaught of bereavement—the still-beating heart within—but also to shelter and nourish it.

John Duberstein is an assistant federal public defender in Greensboro, North Carolina, and the father of two boys. His wife of 17 years, Nina Riggs, died in February 2017 of breast cancer after writing her memoir, The Bright Hour: A Memoir of Living and Dying

, published posthumously as a New York Times bestseller. John’s partner now, Lucy Kalanithi, is a physician and the widow of Dr. Paul Kalanithi, author of the Pulitzer Prize-nominated memoir When Breath Becomes Air

. It’s pretty weird that those two got together, but also pretty damn perfect.