It can be hard to know if my children are reacting to their father’s death — or if they’re just acting their age. The family on Mother’s Day

A year and a half ago, when our kids were 3 and 6, my partner, Joe, died suddenly.  He had just turned 40, played on a softball team, was in a band, and had a job that required physical work. So when my children and I got up that November morning and discovered him, not up making breakfast, or getting ready for work, but rather, dead on our couch, it was a total shock. (The cause subsequently determined, cardiac arrhythmia not-otherwise-specified, was described by the Brooklyn Medical Examiner as, “An unsatisfying diagnosis of exclusion.”)

Since then we have celebrated birthdays, sold our car, relocated our cat, gone on vacation, repainted, absorbed bad news (my mom’s cancer) and good (promotions, engagements, and babies), and ultimately just attempted to make our way through everyday life. But that everyday life is now punctuated by loss, and my attempts to help my children cope with their grief have been hampered by my own. 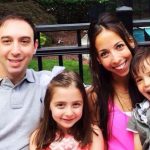 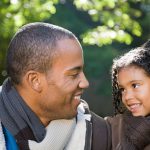 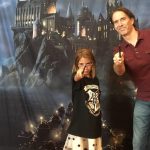 Indeed, during those first weeks after Joe died, I was in a despair haze. The days seemed overwhelming. Then at night I would dream that Joe and I had broken up. The storyline varied, but the sense of anxious confusion did not. Things had been good, my sleeping self mused. We had children. A life together. Why the split? Upon waking I’d have a moment of such deep relief — It was only a dream! — until I remembered that the reality was, oh so much worse. And then that so much worse feeling would settle in for the day.

Still, while I was pretty sure that I knew how I felt, and that that feeling was awful, I could only guess at my children’s emotions, let alone at their dreams. To be sure, there were plenty of times when a connection seemed obvious. My 3-year-old, Rocco, developed a new fear of robbers or monsters, and hid from them under furniture saying things like,  “The only person who will make me happy is Daddy.” Or, “The only good thing is if Daddy will be born again as a baby.”

My daughter, in first grade, continued to present her usual sunny self at school as if nothing had changed. (“It seems important to mention that Clementine has not brought up her father’s death in class…,” noted her end-of-year report card). Yet at home she would erupt in a way that my aunt joked was reminiscent of me at 14.

But while some of my children’s reactions seemed clearly linked to Joe’s death, I often found myself trying to determine if their melancholy or sudden tears or bursts of anger were simply a function of age and personality, or if they were signs of trauma, and if so, how gently need I tread. So I questioned everything. Should I talk more about their dad, or less? Allow them extra dessert, or maintain our old mealtime routines? Indulge tantrums, or punish them? Let them sleep in my bed, or insist they stay in their own? Was the “Daddy Box” someone suggested a good idea or not? What about all the framed family photos my brother put out? Not only did I not know the answers, but I also didn’t have the energy to do the research needed to help me find them out.

So I turned to experts. First I canvassed the few therapists I knew for advice. After spending an afternoon with us, a child psychiatrist friend recommended the 1982 classic, “How to Talk So Kids Will Listen & Listen So Kids Will Talk?” (Give kids choices! Let them spin fantasies! Name their feeling!). I ate it up.  A school psychologist friend then suggested the 1971 children’s book “The Tenth Good Thing About Barney,” a story of a boy whose cat has died and the argument he has with another kid about whether his dead cat will go to heaven or simply become part of the earth. I loved that too. The family at Vancouver Pride

But I didn’t relate to any of the other material on grieving and parenting that came my way, and since I could only read 30-year-old books about about dead pets and parent–child communication strategies for so long, I decided to get the kids a therapist of their own.  His name was Bob, and he specialized in bereavement. After the first session, (talking about Daddy, stuffed animal role playing, and drawing family pictures) the kids were sold. It didn’t take long for me to be sold as well. Bob, met with me after each of their sessions to debrief. Like my new bible, “How to Talk,” he encouraged me to let the kids make choices and to validate their feelings of fear and anger —even when those feelings seemed overblown or out of place. And he reminded me that while some of their behaviors were related to their father’s death, a lot of the meltdowns, sullenness and potty humor that was driving me crazy, could just be related to being 3 and 6. However, seven months in, Bob felt they no longer needed his grief-specific counseling, and with some reluctance, we parted ways.

By then it was summer. So we went to see my parents in Canada, and visited friends in Hawaii, and got away from the countless daily reminders of our old life. After our return, I described that time as restorative and crossed my fingers for an easy transition back to our new reality.

This reality is still relatively new, but the loss is ever less so. Yet even as more time passes, I continue to wonder how many of my son’s tough days at preschool, or which of my daughter’s dark moods at home are responses to their father’s death. I really don’t know.  But recently when I asked them to wish on an eyelash, Clem wished for a time machine to last year, and Rocco wished that no one else in our family would ever die. And those wishes, they kind of made me think that the answer was maybe more than just a few.

Originally from Canada, Ellen Friedrichs is a health educator (and mom) based in New York City, where she teaches high school and college classes, and runs About.com’s LGBT Teens website. Find more of her writing at her at clippings.me/users/ellenkate.