Trying to Get Pregnant After the Death of a Child

After losing my six-year-old son, I was determined to give my youngest child another sibling.

I’m still pissed off at the therapist we saw three weeks after Riley died, the way she lectured us on the stages of grief, as if we faced an exam. When I told her we wanted to have another child, she said, “It’s too soon to think about it…maybe in a few years.”

“Well, we can’t talk about that today.”

My stoicism masked my anger—or she ignored it, while I focused on her immaculate desk, void of photos. Just a framed print of a rainbow over the words, “And when it rains on your parade, look up rather than down. Without the rain, there would be no rainbow. —Jerry Chin.”

READ: My 6 Years of Anticipatory Grief 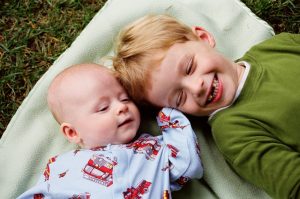 “You can live a full life with one child,” she said. I wanted to walk out, but I sat motionless in the straight-back chair, afraid that any movement would generate a tidal wave of grief. She charged us one hundred and eighty-five dollars for a precise fifty-minute session, and gave us a book on grief she co-wrote with a colleague. I tried to read it once, but got nothing from it. I still wonder about her personal life. Did she have kids? Had she ever lost someone close to her? Had she somehow been spared from tragedy for sixty-something years? What bothers me most about her statement is its untruth for parents who lose children. I agree that we can live full lives with one child, but full life and dead child create paradox.

Our compulsion to have a baby trumped the therapist’s advice: our need to hope, to create a fuller future for us, and Riley’s younger brother, Desmond. We clung to hope like floating debris in a tsunami. For the next three years, I went to fertility specialists, tracked my cycle, took medication. Other therapists might have counseled against it, encouraged taking time to grieve, but the focus on activity and hope softened my grieving process.

When we asked the therapist about support, she told us losing a six-year-old was so rare, no groups existed, as if those for infant or teenage losses wouldn’t welcome us. We never heard from her again, and found a less traditional therapist, a hypnotherapist who had lost her husband in a car accident on his birthday, when they had young children. She supported our trying to get pregnant, helping us navigate that, and our grief.

READ: Learning to Quiet My Mind

Month after month of disappointment, the side effects of the drugs, and warnings about my old eggs, I wanted to stop, but my husband wasn’t ready, and I wanted to feel I’d done everything I could to give Desmond a sibling. We hadn’t had a successful IVF cycle because I was so sensitive to the medication. I found a new doctor, who recommended minimal stimulation IVF, and a six-month plan: three surgeries, then transfer the embryos two months after the last surgery, with the goal of retrieving one good egg each time.

It took a year, and we ended up with one embryo. I thought many times of giving up, moving resentfully through the motions. I looked forward to finishing regardless of the outcome, but enshrined my hope in the frozen embryo, fearing the potential loss—all that energy, time and money invested in seven cells. When I didn’t get pregnant, my husband and I let go. We both attained peace about having one living child, and I have no regrets. When Desmond tells me he wants a brother, I know I did all I could.

Chanel Brenner is the author of Vanilla Milk: a memoir told in poems, (Silver Birch Press, 2014).  Her poems have appeared in Poet Lore, Rattle, Cultural Weekly, Muzzle Magazine, Deep Water Literary Journal, Diverse Voices Quarterly, and others. She is a contributor to All We Can Hold: poems on motherhood, (Sage Hill Press, 2016). She lives in Los Angeles with her husband and seven-year-old son. Follow her on Facebook and Twitter @chanelb2 or ChanelBrenner.com.