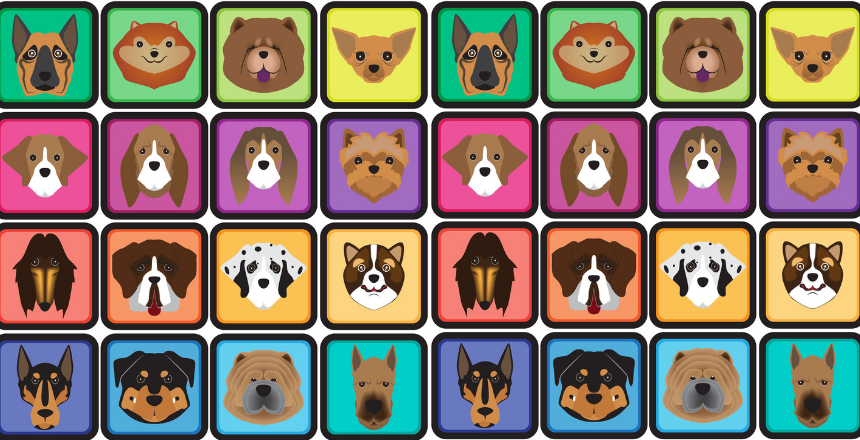 I have been on permanent disability since 1995, when my HIV condition progressed to full-blown AIDS. After years of battling depression and anxiety that came with being a long-term survivor, my doctor suggested a companion dog might be good for me. He even offered to write me a note, prescribing a service dog, since my building didn’t allow pets. I considered it—I love dogs—but didn’t act on it for years.

Then, in 2005, I started seeing this adorable dog named Harry tied to parking meters outside of the laundromats and cafes in my neighborhood. Every time I saw him, I couldn’t help but stop to play. Harry was just a puppy then, and he took to me immediately. It got to the point that my friend would call me whenever she had a Harry sighting, and I’d go out of my way to pet him for a little while. One night, I saw him outside a bar—the wind was cold blowing over the ocean and Harry was shivering. I picked him up, put him under my coat, held him next to my body and thought, Where in the world is his owner?

When I finally ran into the guy who I thought was his owner, I stopped to tell him he had the cutest dog I’d ever seen. Brad, it turned out, was a volunteer from Wonder Dog Rescue and was fostering Harry while he looked for a forever home. I remembered then what my doctor had said and thought that maybe I could have this dog Harry.

I hadn’t known anyone who was HIV positive until I moved to San Francisco in 1987. The medical community had recently stated likely causes—unprotected sex, intravenous drug use—which seemed preventable, so I wasn’t worried. Then in 1988, I had a kidney stone attack. During treatment, the doctor told me I was HIV positive. There I was thinking I’d be able to avoid it, and I was already positive.

I had just started my 401(k). I went to the bank to cash it out and when I tried to apply for life insurance, I was redlined because of my zip code. I was, and still am, living in San Francisco’s Castro district where AIDS was increasingly visible. Young guys, my age, were wasting away, moving through the streets with canes or in wheelchairs. I lost more than five hundred friends to AIDS-related illnesses, including my two best friends. After a while, I just quit counting. Like many survivors, I have PTSD from years spent wondering what was keeping me alive when everyone else around me was dying. 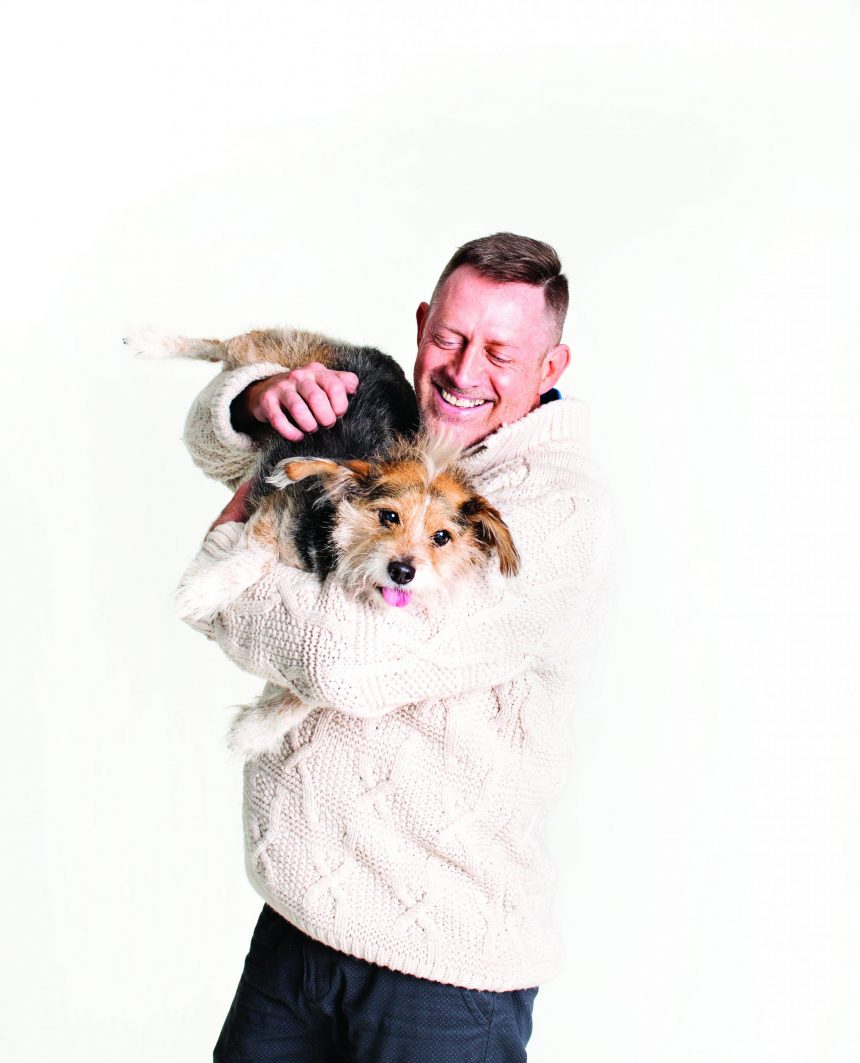 At the time, we thought doctors would solve the problem quickly—we’d have a drug for it in no time. Instead, the government didn’t respond. Members of Act Up and other activist groups put their lives on the line—doing work that benefited not just people suffering from HIV/AIDS but people with other life-threatening illnesses—and I cycled through almost every medication in the book.

I started on AZT in 1995; that was the hardest. As the virus mutated and the drug stopped working, I came down with thrush in my mouth, red bumps on my skin, neuropathy and lost 15 percent of my body weight. For a while, I was taking twenty-four pills a day and I’d spend hours staring at them scattered across my coffee table, trying to time them right. I was thankful to have medication, but sometimes I got tired of taking the damn things. I got tired of the fear that if I missed a dose and the virus mutated again, there’d be nothing left for me to take. Often, I’d leave my doctor’s office wondering, How long can I keep this up?

My doctor, a gay man and pioneer in HIV/AIDS research, was my lifeline. I credit him for keeping me alive. I also found an LGBTQ-friendly, New Age ministry that was nicknamed Disco Church, because it drew five hundred people on a Sunday afternoon and kicked off with dance music, followed by a meditation. They hosted talks on self-healing that changed the way I coped with my diagnosis. I learned to use the law of attraction, visualization, affirmations and meditation. When I worried about things like access to medication, I reminded myself that you do not heal through fear, you heal through compassion and having a passion for life. That’s why even when I don’t feel well, I do activism and fundraising work to help others. I have raised a million dollars in my life for AIDS-related charities and have no plans to stop.

I knew a lot of survivors who were depressed and felt like their lives were over. I focused on living instead. And Harry helped.

Almost immediately after I adopted Harry from Wonder Dog Rescue, I felt a greater responsibility to stay alive and stay healthy. I exercised and got fresh air whether I wanted to or not, because Harry needed me to. If I was depressed, Harry was affected by my mood, so I didn’t let myself stay low. It can be hard when you live alone and there’s no one to ask if you’re okay or to tell you a joke. But Harry would come along and throw a toy in the air and then look at me like, Well, are you going to get it? And I’d lose it. He knew how to make me and everyone around me laugh.

My friend Dina Deana took Harry to work with her at a retail shop that raised money for HIV/AIDS. He wore an employee name tag on his collar and greeted customers, and she watched as people came in giggling and smiling. When we’d be driving and come to a stoplight, I’d look over to find a car full of people laughing and waving at Harry, whose face was out the window, tongue flapping like crazy.

He was a great companion. I think a lot of long-term HIV survivors give up on relationships. Your body changes as you age, and we got sick in our twenties or thirties, our prime earning years. Between the financial, physical and emotional effects, it can feel like you’re not the most sought-after partner. Having a dog fills that void. A dog loves you unconditionally. If you’re shy, or you’re not feeling well, or you don’t like how you look, your dog doesn’t care. And when you take him out for a walk, he forces you to interact with people and smile.

I never felt alone when Harry was with me. At night, we’d lie nose to nose and I’d say, “I just love you.” He would look into my eyes without blinking, and there was this complete trust that we would take care of each other always.

I never felt alone when Harry was with me. At night, we’d lie nose to nose and I’d say, “I just love you.” He would look into my eyes without blinking, and there was this complete trust that we would take care of each other always.

Harry passed away in 2016. In the last year of his life, there were moments when I could tell he didn’t feel well, his energy was different. It turned out he had a tumor on his spleen. When I took him to the vet, the tumor erupted. It would have required surgery, a transfusion, and a really difficult recovery, and before I could make a decision he passed on his own.

I believe people come into our lives for a reason, and dogs do too. Before I knew that Harry needed a home, there were so many times I would pass him on the street and think, what a coincidence that I keep running into this same, sweet dog. Of course, it wasn’t a coincidence that Harry showed up in my life when I needed him most. It was destiny.

When I lost Harry, my friends knew I was not in a good way. A few said, “Get out there, Gary. Another dog needs rescuing,” but I couldn’t. It was like losing my child. I believe souls can come back in different bodies, so the afternoon Harry passed I whispered to him, “If you had a good time and want to come back, find a way to let me know it’s you.”

It was a year after his passing before I started to look at dog rescue sites. It seemed like every six months I would write to one and get my hopes up, and it wouldn’t work out. I finally rescued another dog last August. I saw her online and picked her up from Fresno. Her name is Tater, like tater tots. Whenever people who knew Harry meet Tater they say, “Oh my god, she reminds me so much of Harry!” She has his same temperament and mannerisms, even though she’s a blond, long-haired dachshund. I laugh and think, Well, Harry came back as a blond this time.

There’s a reason we have emotional support animals. Research shows animals can help lower blood pressure and cholesterol levels, cure loneliness, increase exercise, improve your social life. Pet owners with AIDS are less likely to be depressed than non-owners. Kids who grow up with cats and dogs have fewer allergies and asthma, stronger immune systems, and learn greater responsibility. And for me: Fourteen years later, I am on three four pills twice a day and I finally got my viral load undetectable.

A dog’s energy lifts us to a higher place—it’s that simple. Dogs don’t worry about their futures or their medications. They go through life enjoying their Kibbles ‘n Bits. When they’re thirsty they drink, when they have to pee they let you know, and when they want to play with another dog, they go for it. No one has a greater passion for life than a dog. Maybe we should take a cue.

This piece is excerpted from the book ‘When Dogs Heal: Powerful Stories of People Living with HIV and the Dogs that Saved Them,’ by Jesse Freidin, Zach Stafford, Christina Garofalo and Robert Garofalo (Zest Books, 2021).