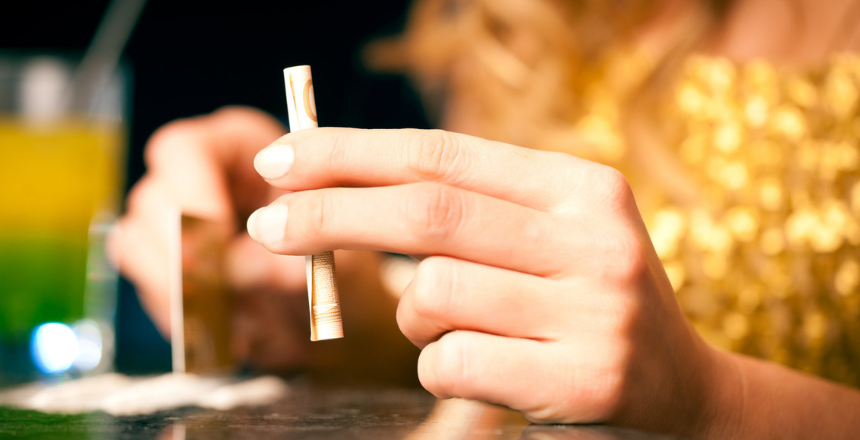 Thursday, fine. Friday, normal. But leave it to Tuesday to show you how fucked up you’ve become.

It was 6:00 PM on a Tuesday. I was 21 and found myself with a gram of coke in my pocket standing in front of my childhood bathroom mirror. The mirror with the etched purple and pink flowers that once reflected eight-year-old me and my two best friends playing dress up and caking on as much make-up as we possibly could to shoot our fashion show on Polaroids.

My eyes were dark and teary. I was in a daze as my heart raced, and I turned on the shower to drown out the noises in my head telling me I was both doing everything completely right and wrong. My dad and brother were dead. My mom was recovering from a round of chemotherapy and had no idea what I had been up to as she knitted a wool scarf on the couch in the living room. Something about that hiding was thrilling.

My retro halter top from Urban Outfitters perfectly accentuated my cleavage and my white cut-off shorts were catcall material. I looked like I had it completely together on the outside, but the coke and my broken insides told a different story. The coke was in a small saran wrap twisted bunch in my pocket. I took it out and put it on the counter. I stared at it and then back at the mirror. My head felt as though it weighed a million pounds courtesy of bad decisions and trying to fit in with friends who weren’t really my friends. Not if they wanted me to look at myself like this. I took another look at the plastic bag of coke sitting on the white countertop and then back at myself.

I was not Geri*, who invited me into this world when she brought me into her drug dealer’s home. We sat on his couch and I touched his US Weekly magazines that were sprawled onto his  glass coffee table. He must be normal if he’s reading US Weekly, I thought, we read US Weekly. I felt a rush from being where I wasn’t supposed to be. Hanging out with an older guy who was selling us drugs, doing a bump of coke off a key in his graveled driveway and speeding off to some strangers’ house to sit in a circle and do more key bumps. No cumbaya, no guitars, no laughter. I did one more bump in the circle and started to feel dizzy. My heart was racing and even if I wanted to fit in, my body did not. I went to the bathroom through a dirty garage with a fluorescent light on and took deep breaths while sitting on the toilet. I realized I should not be there.

Geri didn’t come after me. No “Jamie, are you ok?” No “Let’s get you home.” She was trapped in this world and I was merely an accessory along for the ride. This was not like the days of hotboxing her car and going to her parents’ beach club for dinner with the best bread rolls and butter, trying to hold a conversation without laughing. Geri was wasting away. I wondered if I could waste away too, and, if then, I would be hotter and more attractive. I was desperate to be wild and she was my ticket to fun. She was also my best friend and with every bump, every line, I was losing her.

“Who are you?” I asked myself in front of my flower etched mirror as it began to steam up. Years of my life flashed before my eyes, every image that had taken form and grown right here in this spot. Every loss. Every love. Every friendship.

I took the gram of coke and threw it into the toilet, disgusted. There’s more wild for me and it doesn’t include you, I protested.

My mom died a few years later. Geri did not come to shiva, she did not mourn with me as I mourned my mother. She was completely absent. I wanted to forgive her, as I had many times before. I wanted to give her another chance to show up for me as I had for her over and over again.

“Jamie, you are the one true friend that stuck with me,” she had said. These words were on repeat in my head. I couldn’t be the one that didn’t stick around. I was not someone who gave up on anyone or anything easily. But I couldn’t stick around for this toxic friendship any longer. I needed to put myself first and remember the people in my life who did show up, constantly.

“You are only as good as the people you surround yourself with,” my mother would tell me of friendships over the years. Was this the most mom thing you could say to deter your child from getting in trouble? Perhaps, but it worked, and as I looked around the room at who surrounded me during her shiva, I only saw support and love looking back at me. These were the friends who would encourage me to grow, to use creativity as my superpower, to manifest a life full of love and light. These were the friends I wanted to surround myself with as I entered this new stage of grief. The friends that would reciprocate the love I shared.

Jamie Kolnick is the Founder/CEO of Jam with Jamie, a nationwide children’s music company, and is currently writing a spirited memoir about life and loss.

*Name has been changed.