Chronicles of a Former Crier

We never know who we’ll be in grief. In mine, the disappearance of my go-to tears was a shock. 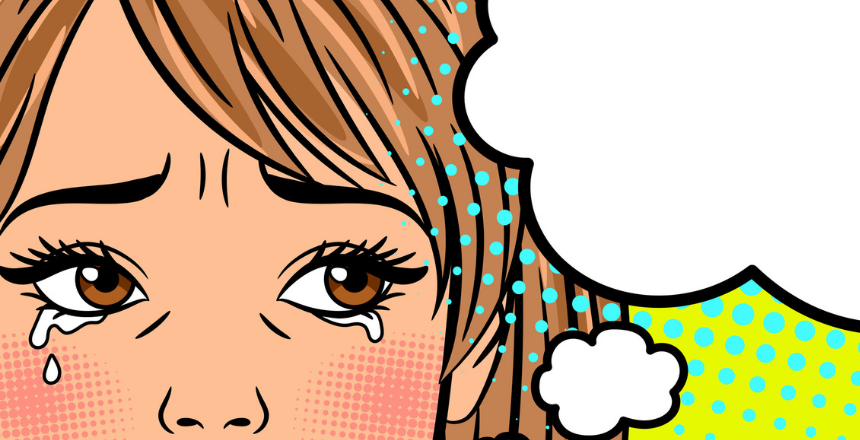 Growing up in my family, I was considered “a crier.” I didn’t appreciate the label, which makes sense, since it was meant to be unflattering.

Sure, I burst into tears at the roar of any crowd, over indignities like curfews and rules, and at the first sign of the Folgers coffee commercial when the daughter came home early from college and surprised her father as he gazed at her childhood photos. I mean, I’m human, after all. Still, being a crier became part of my identity.

The tears continued into adulthood—on Sunday nights when Monday meant returning to a job I hated, after a broken heart or two, watching the series finale of Gilmore Girls. That is, until something truly bad happened: My grandmother’s health took a precipitous downturn.

My parents, sister and I gathered in her one-bedroom apartment with a hospice nurse to await the inevitable. As the family member who lived closest, I’d spent a lot of time with Nana in her later years, holding her hand, bringing her onion rings, pouring over the same stacks of photographs again and again. Yet, as she drew her last breaths, I struggled to connect. I stood in a corner against the wall watching my sister weep and wondered if I’d become a sociopath. The more emotional everyone else got, the more removed I felt.

In the moments after her death, I did cry for a minute or two, but the shock of that reality wore off as quickly as it landed. My grandmother had suffered from dementia for a long time, so maybe, I reasoned, I had already mourned and was simply prepared for the end?

That theory was tragically tested a few years later, when one of my oldest and most kindred friends died at 40 when his body gave out after years of mistreatment. In that case, I was definitely not prepared: Earlier that day, I had already shed plenty of tears. It was early 2017. I was pregnant, exhausted and depressed—and I was not alone in those last two feelings. Trump had just taken office. In many ways, I was already mourning something amorphous and difficult to comprehend.

I’d pulled myself together enough to pick up my toddler from preschool and was pushing her home in her stroller when my phone rang—first one call, which I ignored, and then a conspicuous barrage. When I finally picked up and a friend delivered the news, I lost my breath.

But as soon as I could, I shut my reaction down. I didn’t want my daughter to see me lose it and get scared. My voice quaking, I called my husband and asked him to meet me at home. After we’d set my daughter up with an episode of Peppa Pig for distraction, I stood in our bedroom, my head against his chest, and, for a moment, let myself sob into his black t-shirt.

After that, though, the tears dried up again—when others called in shock to commiserate, while helping to organize a funeral, at that funeral and the bar afterward, while I sat pregnant and sober, surrounded by drunk, sobbing friends. Every time the tears almost came, I’d see one of the others begin to weep and my eyes would go dry.

Didn’t I need to cry, not only demonstrate my sadness but also to get past it?

The thing was, I was plenty sad. I couldn’t work. I spent my days trolling YouTube for old interviews with my friend, who, as a musician, had his 15 minutes of fame. I repeatedly read through years of texts between us. I spent endless hours trying to make sense of his absence with mutual friends. I lost months just thinking about him. I even began writing a novel about grief. Yet no tears came.

I have since cried for my friend, mostly after the memorial was over and I started to return to my daily life three months later. But it hasn’t been the cathartic dam-breaking I expected or even wished for; it’s been more of a slow drip. My eyes well up at a certain song, when I think I spot him on the street, when I exit the subway in his old neighborhood and imagine running into him, when I go to call him and realize that I can’t, ever again.

What I’ve discovered is that, for me, grief is a more internal experience than I’d expected, especially as an extroverted person. There is no getting past what happened; only a new way of being afterward. I can pick through the rubble with others, but, when it comes to truly connecting to the loss, I go quiet. And even though it offers me a bit less release, that’s okay.

We never know who we’ll be in grief. Once, I hated being called “a crier.” Then, I longed to be one. Now, I’ve learned to stop analyzing my reactions and accept whatever comes—a bucket of tears or eyes dry as the desert, sappy instant coffee commercials be damned.

Nora Zelevansky is the author of novels Competitive Grieving, Will You Won’t You Want Me? and Semi-Charmed Life. Her writing has appeared in The New York Times, ELLE, Town & Country, the Los Angeles Times, The Wall Street Journal and Vanity Fair, among others. She lives in Brooklyn with her husband, two kids and enormous cat, Waldo.