The feelings of loss I’ve been experiencing this week are real. And so are yours.

Which is to say, I’ve been grieving this week.

Strangely, waking up the morning after the election was even worse than the previous two experiences, since the day beforehand I’d been actively aware of the most hopeful political state I’d been in as opposed to just going about another day. I entered the voting booth with my mother’s 1970s-era hot pink scarf wrapped around my right hand and held my toddler tight against me with my left. As I filled in the circle correlating with Hillary Clinton, I made sure that scarf maintained contact with my pen. It not only felt like I was electing someone meaningful to myself, but also fulfilling a long wished-for desire for my mom, a lifelong feminist whose early death robbed her of casting this vote.

It was a day filled with less-than-cautious optimism. Then, that night, the sudden unraveling. The quickness of it all – plummeting from high to low. It was too much. Like a new spouse dropping dead while you’re dancing to “We Are Family” surrounded by friends an hour after the wedding ceremony.

Have you never lost anyone you love deeply and thus been curious as to what deep grief feels like? Then consider this: Have you had trouble pulling yourself out of bed for the last few mornings, despairing for what once was and what could have been and fearing for what might come? Congratulations. Now you know. 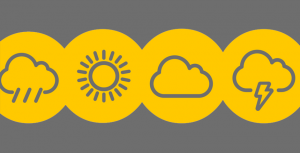 Me this week, illustrated

Similar to my other immediate post-loss experiences, I’ve wanted to shut out the world this week. I haven’t listened to music yet. It’s taken me two days to pay attention to radio news updates and stop purposely averting my gaze from newsstands and my social media feeds, lest I accidentally see an upsetting photo that would make things even worse. I’ve been involuntarily offended by people making too-soon jokes or posting anything remotely unassociated with the loss at large that is this election.

I’m well aware I’m not alone in feeling this way. I’ve read multiple times that Wednesday morning felt like losing a loved one all over again, or that people couldn’t bear to think about how that person would have been crushed by the outcome, or that people have expressed guilt for feeling as though they’re mourning a death even though nobody technically died. At the Javits Center Tuesday night, my friend Rachel Sklar said an anticipated victory party quickly turned into what resembled a shiva (the Jewish period of immediate mourning after the funeral), during which crying people hugged and said it was so nice to see each other, but what a shame it was under these circumstances.

Since Modern Loss launched in 2013, we’ve steered away from political subjectivity. And a couple months ago, when I posted this piece by Chelsea Clinton’s dear friend Mattie Bekink about a meaningful condolence note she received from Hillary in the wake of her newborn daughter’s death, we got some backlash from Trump supporters on our Facebook page lamenting that we were politicizing our mission (I respectfully disagree, as, in our opinion, any way to open up a conversation on loss at a broader level is welcome, even if the subjects are politicians).

But with the election of an unapologetic bigot? Nope, no, sorry. We won’t stay quiet. That would be a betrayal of our conscience and a betrayal to so many of our readers and contributors, many of whom self-identify as belonging to one or more of the groups feeling targeted. When in the first two days after the election pro-Trump swastikas appear in Philadelphia, Jewish journalist Peter Breinart is trolled with promises that he will soon become a bar of soap, “#gobacktoafrica” appears graffitied in a boys’ high school bathroom, the number of calls to LGBTQ suicide hotlines spike, a promise to bar Muslims from entering the country mysteriously reappears on Trump’s website after mysteriously disappearing right before the election, we will speak up.

To be clear: Modern Loss unequivocally stands against every xenophobic, racist, homophobic, bullying, misogynist value that Trump unequivocally embraces. And that’s why we’re focusing on the real grief that half of voters are feeling over the elation of the other half. So to that first half, please know our hearts are breaking with you, and that we see you.

Everyone moves through grief differently. And I always say I’m the last person qualified to give prescriptive advice. But what I can promise to those of you feeling like I am, from my own personal experience with profound loss, is that even if you don’t believe it now, this will get better.

And how? For starters, by taking your time with it. Being compassionate to yourself and rolling with the emotional waves as they come. Not listening to people who tell you to “get over it” (as one parent did at my son’s preschool drop-off today). Eating pizza thrice daily if needed (as I did on Wednesday, and yes that included breakfast). Talking to people willing to listen. Allowing yourself to get pissed off.

But please keep in mind, the getting better part doesn’t typically happen on its own. Just like grieving a death, effort on your own part will be required to help yourself and others (and help them help you, you get where I’m going here). And so, just like those first days after a death, please eventually encourage yourself to harness the sadness, fear, and anger and move forward in a way that works for you. If even with the tiniest steps.

Over here, our tiny steps include continuing our fierce commitment to the work of building empathy in the world and uniting different people around a shared human experience – loss. Now, more than ever, those who live in our country need to work on the ability to understand each other.