The famed New York Times columnist thought of me like a son. When he died, he left me with a trove of fatherly wisdom, courtesy of Gmail — something my own dad would never be able to do. Brian and Jamie Stelter celebrate their wedding with David Carr and his wife, Jill Rooney Carr.

When I reread his emails, I can hear him uttering each word in that unforgettable voice of his.

No one but David Carr could have written me something like that, complete with the “Breaking Bad” reference. 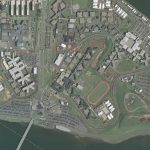 I had left The New York Times one month earlier for a new job at CNN. David’s email updated me on what I’d missed there and rearranged our upcoming dinner plans. Mundane stuff. But his love and his spirit punctuated the sentences, even the misspelled ones. Especially the misspelled ones.

And now that he’s gone, I find myself rereading and finding new meaning from them. The emails are a 21st century record of a modern father-son, mentor-mentee relationship. Sometimes they’re signed “M’wah.” Sometimes they’re blank, with only a subject line: “What’s the haps?” “Update on your mom?” “U in the shop?” “Read this.” The most common: “call me when you can,” with his phone number.

The last one appeared in my inbox on February 11, 2015, the night before he died.

“Am in yer shop. Taping andycoop”

Translation: David was upstairs, taping an interview with Anderson Cooper.

I didn’t reply. I just hurried up to the guest waiting area next to makeup. We talked and talked, and when we had to say goodbye, he gave me a big bear hug.

One difference was that my mom told me about dad. A succession of 150 emails, texts and tweets told me about David. Startling doesn’t begin to describe it.

But some people reached out to me directly (while my phone was mercifully off) because they knew David thought of me like a son. Now, I don’t know if I would have said that so matter-of-factly while he was still alive. He was a father figure, for sure, the closest thing I had to a dad since my own died from heart disease — — but did we ever say that aloud? I can’t find any trace of it in our emails. Really, it never needed to be said.

But the emails help me remember. The first one in my archives is from 2007 (back when he was still using an AOL account!) just a few months after I had started at The Times. I remember feeling intimidated by David’s larger-than-life presence.

But until I reread the email, I’d forgotten that I’d gotten over my nerves and asked him out to lunch. Brian and his dad

Over time, the emails show us planning SXSW parties. Swapping information about sources for stories. Counseling each other during hairy moments in our personal lives.

More than anything, they leave me wishing for an equivalent digital record of my relationship with my dad. Where memories fail, Gmail’s archival system delivers. But the only email account Dad ever had was the business one I’d set up for him.

David’s digital history, on the other hand, is always just a few keystrokes away. As strange as it is to see his Facebook page still online — one of his last posts was about why Brian Williams shouldn’t be drummed out of NBC, foreshadowing this week’s news — I appreciate it being there. The emails, too. A couple of months ago Brooke Hammerling, a mutual friend, told me she’s also been rereading David’s messages. She’s the one who got me thinking about the value of the digital record.

“I won’t ever get rid of them,” she emailed me. “It makes me feel like he’s just on the other side of them.”

My wife doesn’t hoard email the way I do. But she’s glad she held onto the one David sent her when I was on the verge of two big life changes: Marrying her and joining CNN.

Looking back, I couldn’t help but notice this email had no typos or abbreviations. “this next unfolding will be a pleasure to watch, although from a greater distance,” he wrote. “and of all the choices brian has made, you are and will be the most important one.”

On the evening of the wedding, February 22, 2014, David arrived early and stayed late, taking photos with my family members and beaming with fatherly pride. Earlier in the day, I had sent a love letter and a necklace over to the bridal suite where Jamie had been getting ready. Nice touch, right?

Until I recently reread his emails, I’d forgotten who deserved the credit.

From Carr2n@gmail.com on February 19, 2014: “Get a little jewel to send over b4 she walks up aisle. Send over With flower girl. That way she always has a lasting totem of that day.”

Brian Stelter is CNN’s senior media correspondent and host of “Reliable Sources.” From 2007 to 2013 he was a media reporter at The New York Times. He and David Carr appeared in the 2011 documentary “Page One.”