Fiction: I Am the Widow

‘Two days of this, me clinging to that hand, rubbing my thumb along the curve of his wedding ring like I want to wear through the metal, and people dropping their shit in the casket like it’s a recycle bin. I get used to it. It’s the new life I’ve got. ‘

The following piece is a work of fiction by Leslie Pietrzyk’s new book of short stories about young widowhood, “This Angel on My Chest.” (University of Pittsburgh Press). The book won the 2015 Drue Heinz Literature Prize. It is excerpted here with permission from the author and publisher. 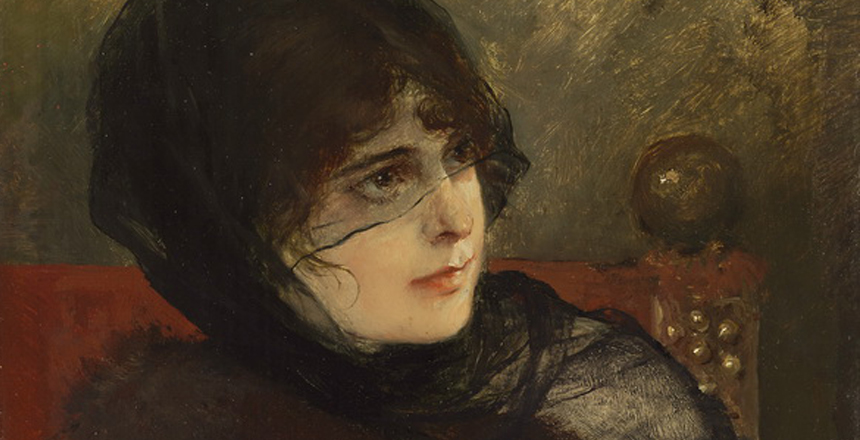 Just like at any movie or TV funeral, his casket gets put up front, set under specially focused lighting, parenthesized by yardstickhigh sprays of white gladiolus. Plump velvet kneeler in front of him, velvet curtains behind. Top half of the box open, so we can see his face. If we want to see him dead, that is, if we want to look right at death. There are plenty of people ducking their heads, twisting necks around and staring up high into the ceiling or deep down through the carpeted floor. Not me. Right off, I grab hold of his hand, entwine my fingers around his, not because that feels so great but because it unnerves the people circling me. Hell yeah. I’m grabbing a dead man’s hand. I’m grabbing my dead husband’s hand. Maybe I won’t let go. Maybe I’m going crazy.

What happened was sudden. Alive—and then not. The two of us—and then a pack of family roaming around, in their suits and dark, sensible dresses, howling and clawing each other into tense hugs. A dead body sprawled on the kitchen floor—and then this dead body tucked neatly into a casket. What happened is fast. This is the worst whirling ride at a carnival you can’t jump off of.

Not knowing much on planning funerals, when the professionals say, “Open casket?,” I nod like I mean yes. Not knowing when there’s an open casket, people read an invitation to toss a little something on in. Guess there’s meaning, though a list looks pretty junky: Color photos by a lake, a postcard of the jagged Chicago skyline, pizza takeout menu, half a bottle of tequila, an old lady’s rosary, a wad of clover freshly ripped from a lawn, foot-long length of red wrapping ribbon knotted in four places, wooden fraternity paddle, dog-eared paperback of Fahrenheit 451, brittle yellow Palm Sunday palm frond, tarnished baby spoon, crayoned drawing of a dinosaur-like creature, scuffed-up baseball, pencil sketch of a lion’s head, a regular ordinary brick—come on!—an unopened package of two Twinkies, the Let’s Go Spain & Portugal guidebook with swelled-up pages from falling in water presumably somewhere in Spain or Portugal, race bib #1458 from the Marine Corps Marathon, a bleached-out whelk, a nickel and two super-shiny pennies in a stack, smooth gray rock the size of a big toe, an acorn, Bob Marley import CD, baby food jar half-filled with sand. Four or five flap-tucked envelopes with his name in ink across the front. It’s a jigsaw puzzle of a big picture of nothing. Everything all means something but the only one who maybe could explain is lying there dead.

And you’d have to say after a while that things get more than a little ridiculous, this casket as receptacle, this dump it all in mentality, because there I am holding onto his hand, when tra-la-la-ing up is some second cousin I barely met—maybe at the wedding, maybe—heaving in an old shop class project from middle school that supposedly they’d worked on together. 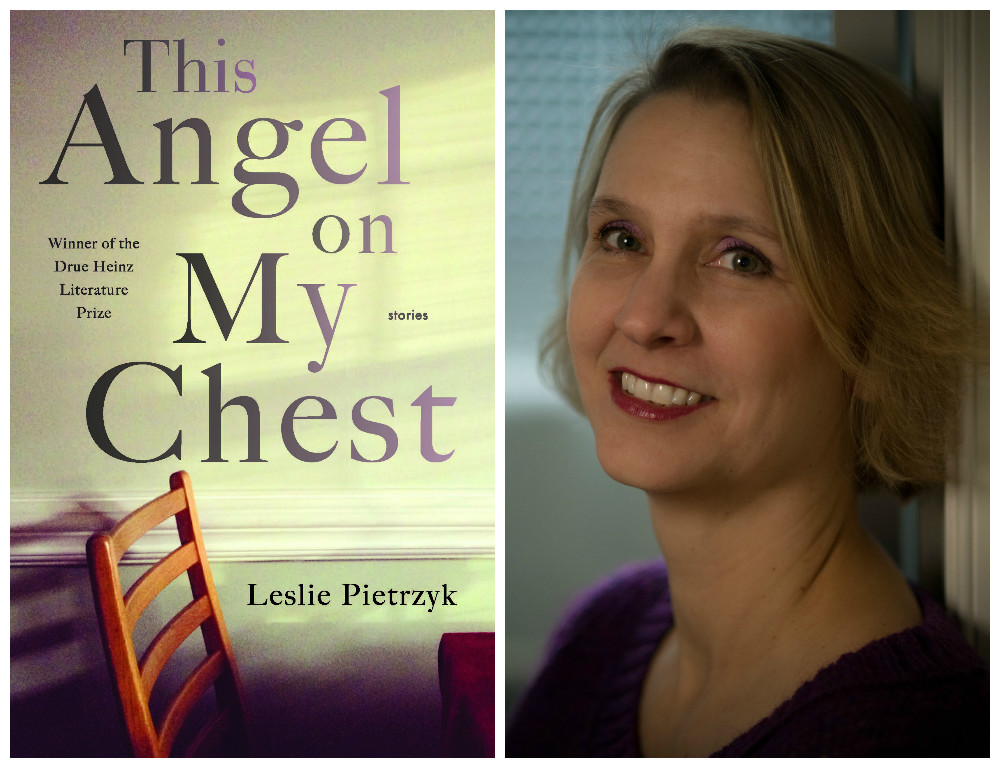 The author and her most recent book of short stories.

What’s he supposed to do in the afterlife—IF THERE IS ONE, WHICH THERE ISN’T—with an old lamp base shaped like a wagon wheel, I want to know.

I put nothing in there. No note, no picture, no shop class project. I want him coming back, so I’m leaving him reasons to haunt me. I’m turning him angry enough to rise up and come after me. Damn it. All the while I’m smiling, clinging to his hard, dead hand. They got them folded up on his chest, like insect wings, like a way no one poses in real, living life. Left hand on top, so that’s the one I’m grabbing, with that malicious wedding ring, its “til death do you part” mockery. People crush into me with hugs; people pressing around me cry through a blizzard of tissues, and sobs ricochet off the walls. As long as I’ve got his hand, I act like I’m okay since that’s what they need. I crack a joke or two, smile, smile. Everyone’s so relieved to laugh, relieved that laughing is wrong but still possible. They’re treating me like I’m clear cut glass. I appreciate it.

Two days of this, me clinging to that hand, rubbing my thumb along the curve of his wedding ring like I want to wear through the metal, and people dropping their shit in the casket like it’s a recycle bin. I get used to it. It’s the new life I’ve got. It’s what I’ve got. It’s something settled. It’s that.

I never planned a funeral so what I forget is the part where they pack up. They’ve got to lock the box. Actually, I didn’t forget about that part; I just never knew it. I’m, like, twenty-nine years old, so how many funerals was I not someone’s kid at? How’d the box get closed? Never thought about it, but someone has to do it, it’s going to be done, and someone’s got to be the last one to look at him, the last one holding that hard, dead hand, the one hanging on to the end. Me.

Calm-voiced professionals infiltrate, swarm the room, though it’s only two or three of them really, calmly suggesting in their calm, buttery voices that we retire to the outer lobby, that they need to prepare for transport.

Like . . . the space shuttle? The Jetsons and Star Trek? Transport? I hate words that don’t mean what they mean.

It’s like Noah’s Ark docked out back, everyone buddying up two by two as they leave the room, the crying thick as pudding. There goes my mother with her sister; his mother—oh, she’s so sad; she wants desperately to be sadder than me; I should let her win—she’s draped like an eel across the arms of her husband; his two brothers, stiff-shouldered; my brother-in-law towing my sister, her spiky heels poking dots in the carpet; my dad and my uncle, the brother he didn’t talk to for five years until now. His poor, sad dad standing by himself. One son comes back for him. He walks out next to his son, his body a limp, as if all the bones have been broken and put together backward. The favorite sister and her boyfriend no one likes; she’s not looking me in the eye, so it’s the boyfriend watching, the boyfriend’s pale blue eyes, clear like flat water, the last in the room with me.

I’ve got his hand through all this. Don’t know why. Doesn’t make me feel better. But I’m afraid something will happen if I let go. They’ll take him away if I let go. They’ll swipe his wedding ring. (“You know they steal the jewelry,” more than one person whispers in my ear.) There’s a picture in my head of a bottom dresser drawer rattling with a thousand different wedding rings.

No one comes back for me.

The one who would come back for me? Who would march me out to the Ark? I’m holding his hard, dead hand. Damn it. The professional has seen people cry like this, I’m sure. Like this, like this too, like this, this. These are endless, unforgettable minutes I won’t think about again. No one wants to touch me. I’ve got to let go. I’ve got to, and I don’t know how I do, but I do, and when I do, my own hand feels hard and dead, not part of my own body ever again.

I march myself to the outer room, to the sad stares, slam myself against the isolating wall of sympathy. Right now, I’m saddest. All I’m seeing right now are the miles of my own tears.

Then the favorite sister announces that she has a note. She has to drop it in. She forgot. She meant to. She has a note for him. This note she wrote last night. She holds up a tattered envelope, like a “who needs two” scalper. She’s the youngest, the baby of the family, only twenty, nesting in the safety of being everyone’s favorite, even after flunking out of the good college and then the less good college, even with the boyfriend no one likes. She wanted to be a vet, but now she works in a pet store while she figures out her life. She might be pregnant; there’s that look about her of a complicated secret, and she drank club soda last night when the rest of them were at the vodka, and now this note. So hard to hate her, but with that smudgy envelope in her hand, I do. Even though she lived with us that summer, even though that summer she and I sat out nights on the moon-splashed deck with glasses of white wine, talking as if we were the sisters. Even though I never got along much with my own sister and didn’t see what having a sister meant until I met his favorite sister. Even though all that.

READ:The Things We Do for Grief: Marathons, Memoirs & More

Even though he would hate me saying in a very loud voice: “No! I have to be the last one to see him. You can’t go back in there.”

She’s flummoxed, gripping her tattered envelope—it’s pink, as if from a greeting card—and her boyfriend grabs her elbow, maybe thinking she might puddle to the ground.

I am the widow. (That word means me.)

I swing myself through the doors, and it’s okay because nothing much has happened because maybe this goes on all the time when you’re a professional—maybe people come swinging back ALL THE TIME with one last thing to cram into the open casket or one last check that the wedding ring’s in place. A professional snaps that calm smile back on and says, “Yes? What can we do for you?”

I shake my head like I mean no. “I’m sorry,” I say. The pink envelope goes right then into my purse, smashed down to the very bottom, where the lint breeds. She’ll never know. I’ll fish out my wallet, my keys, the sunglasses, then I’ll shove this purse and everything inside down into a trash bag for the Salvation Army, where I’ll also shove his suits and his T-shirts and his winter coat and his shoes and his neckties and all the rest of everything that once was his.

Leslie Pietrzyk is winner of the 2015 Drue Heinz Literature Prize for her book of short stories This Angel on My Chest and is the author of two novels, “Pears on a Willow Tree” and “A Year and a Day.”