Our ‘Mourning, Noon and Night’ columnist on embracing unconventional ways to grieve 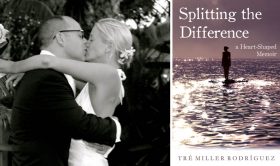 The author on her wedding day, and the cover of her recent memoir (Images courtesy of Tré Miller Rodríguez)

When we met Tré Miller Rodríguez over iced coffee and fresh mozzarella last summer (weird combo, we know), we knew we had to collaborate. Too much energy was flying across the table to not give in and join forces. The result? She’ll use this space to explore the creative ways in which Gens X and Y deal with loss. Nothing is off limits. As always, we’d love your feedback in the comments section below. Take it away, Tré… –ML

When my 18-year-old brother, Phil, died in a car accident in 1994, my parents and I didn’t grieve politely. Phil was the first major loss we’d experienced as a family, and we mourned him in ways that reflected his live-out-loud approach to life.

Which may be why we chose a steel coffin that resembled his beloved Nissan 300ZX, and didn’t blink when his friends slipped blunts into it at the viewing. Beside the funeral guest book, we placed a jar of glass from his broken windshield with a framed message: “The glass may be shattered but our memories are not: Take a piece.”

My grandparents were slightly mortified when they heard we were still marking Phil’s deathiversary a decade later by getting a keg, playing his Bob Marley albums and inviting his friends over to celebrate his life. 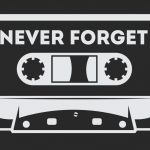 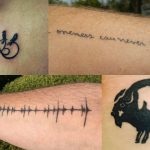 If our grief made some people uncomfortable, it’s also what compelled others to call us when they experienced loss. Between Phil’s death 19 years ago and my husband Alberto’s fatal heart attack four years ago, I attended nearly 30 funerals. (Did I mention I’m 30-something?) I’ve helped friends choose a coffin for their mother, created giant photo collages to honor ex-boyfriends and written more obituaries than undergraduate essays. After each loss, I’ve marked my calendar and brought flowers (or often, a bottle) to families a year after their loss — knowing from experience that this gesture mattered just as much as it did during that first awful week.

By the time I became a widow at 34, I felt acquainted enough with loss to honor Alberto’s death in ways that felt meaningful — or efficient — to me. And I didn’t give two-fifths of a fuck about “proper” funeral etiquette or grief protocol.

Women aren’t supposed to pallbear? Whatever, I’m doing it. Don’t post your “sads” on social media? I announced the time and place of Alberto’s funeral on Twitter and Facebook — along with my daily encounters with his memory for the next year. Send hundreds of individual thank-you notes for condolence cards and flowers? Nope. Can’t even remember how to put pants on. (#sorrynotsorry)

My grief journey took me to several countries to spread Alberto’s ashes and in 2010 to Tumblr, where I started a blog called White Elephant in the Room. On tumblr, I found my tribe. It’s where I began interacting with scores of 20- and 30-somethings who were also reeling from loss. And so my blog expanded from excerpts of the grief memoir I was writing to things I wish someone had told me when Phil died and things I’ve learned since Alberto died.

Fellow tumblrs have written me at 3 a.m. asking how to plan a funeral reception for 2000 people, how to write a nontraditional eulogy and how the hell did I get through the first holiday season? And I write back. But what about the grieving people who don’t know my blog exists? This bi-monthly column is where I hope to reach them.

Through “Mourning, Noon and Night,” I’ll explore getting through the holidays, but also unconventional memorial tattoos and rituals that help us feel better (or worse). I’d like to profile innovations in the loss space—coffins wrapped in huge photos of a loved one, for example—and discuss ideas for a universal accessory that would instantly convey “I’m-in-mourning-here-so-be-patient-if-I-have-a-meltdown-in-the-checkout-line.”

I hope to work through my own loss by embracing a global conversation about it. I hope you’ll participate in that conversation — I’m totally open to your topic suggestions — and most of all, I hope this is where you can find your tribe.

Tré Miller Rodríguez is the author of “Splitting the Difference: A Heart-Shaped Memoir” and the popular Tumblr WhiteElephantInTheRoom.com.  She is an award-winning copywriter whose essays have appeared in The New York Times, Manhattan Magazine and on the Huffington Post.