For immigrant families like mine, loss can means mourning from a great distance. 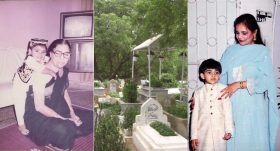 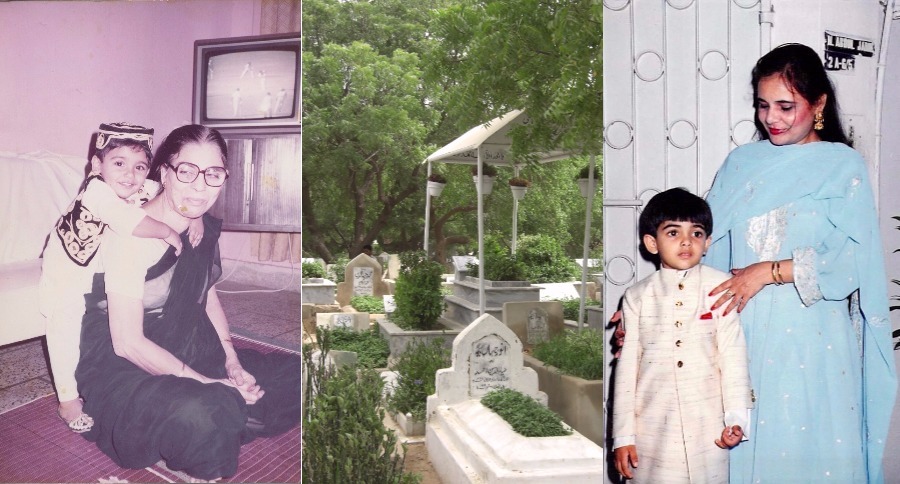 The author and his Nani, the cemetery in Pakistan where his Nani and aunt are buried; the author’s brother and their aunt, Annie.

I vaguely remember my mom receiving “the call,” soon after we had immigrated to America, from Pakistan. I was four years old, and back then Mom had no other choice than to mourn her father from a distance.

Money was one factor. She also had work and family responsibilities. Then there were logistical realities to contend with: For Muslims like us, burial and last rites often occur within hours of death. (In some cases, though not ours, there’s also the issue of legal status — either because the next of kin is an undocumented immigrant, or seeking political asylum from a place where they are no longer welcome.)

I never really viewed myself as an immigrant, having arrived in America as a toddler in 1985, and having only visited Pakistan once at age 10. Then, in 2006, when I was 23, I got an ominous call of my own. This time, it was about Nani, my mother’s mother, who was in the hospital.

Khadijah Begum, known as Nani to me, first visited the Untied States in 1994 , eight years after we settled into our new lives. My Dad had just been laid off from work. My Mom was expecting my sister and was working to help support our family. But as a kid I was oblivious to our precarious situation.  Sharing a room in our small three-bedroom home with Nani, on a quite street in California’s high desert, an hour north of Los Angeles, didn’t seem at all odd, just practical.

Over the next 12 years, Nani would end up traveling between Pakistan and the United States a dozen times. When she lived with us, Nani would care for us while my parents worked long hours. We would spend time talking about Pakistan; always patient with my Urdu, our conversations doubled as language lessons. Nani was my conduit to that pattern of life that was alien to my American upbringing. In turn I would explain America to her.

By the time of her last visit, in 2005, five of her nine children had immigrated to the United States and she, too, had become a U.S. citizen. But a scattered family left her in a constant state of transit. I was finishing up college and couldn’t make my way to my parent’s home to send her off the last time she visited us. I called her before her flight. When we spoke, she made one last request that I come to visit her in Pakistan; she felt that this would be her last to the U.S. I said I would. She told me she would hold me responsible for the promise.

READ: When Your Loved One’s Last Wish Was ‘No Funeral’

A year later, I got the call that Nani was in the hospital. Her health had long been precarious due to diabetes, but she always pulled through with a little care. So I didn’t prioritize going to Pakistan. I was 23, and I was a few months into my first job out of college.

When Nani died two weeks later, very few people around me knew about my loss — only what I chose to share with them. For me, Nani was my friend, my confident, and my personal cheerleader.  Most importantly she was my connection to my culture, family members and a rich deep history not only an ocean and continent away, but torn by the catastrophe of the 1947 Partition of South Asia into present-day India and Pakistan. And unlike so many other relationships, ours was one where the only thing required was presence, never a desire to impress.

Even if I could share the loss with those around me, I could not explain all of that without talking about my own shame over not visiting her in her final years. In Nani’s absence, I began to feel the isolation that immigrants feel when their loved ones die.

As custom dictated, the last rites were performed and she was buried within a few hours of having received the call. There was no funeral to rush to. Life continued all around me, but I struggled when people spoke about their grandparents or their holiday plans. The pain of her absence was intertwined with the guilt of not having fulfilled my promise to visit.

I was spurred by this sense of guilt when in 2008 I received a call from my Mom asking if I would go with her to visit Pakistan.  My aunt Seema Bilgrami, Annie as I affectionately called her, was terminally ill with leukemia.

This time, my mother and I both got a chance to say goodbye, to participate in the last rites. After Annie’s burial, I tried to find Nani’s grave market at the cemetery. I tripped over long-faded gravestones and tried to avoid bird poop. The graves were like the buildings of the city, jumbled, built out on top of each other, one gravestone marker trespassing over another grave; grand mausoleums that appeared more wedding hall entrance than solemn burial place. It was difficult to follow the Islamic etiquette of visiting a cemetery — that is, avoid stepping on or turning your back on a grave. Navigating my way through the cemetery, I could hear Nani reminding me promises shouldn’t be made lightly.

When I found Nani’s grave, I realized that Karachi was not Nani’s first home; the marker placed her birth in India. She had left her home near Lucknow, India during the Partition. In this way she was, like me, an immigrant. When Nani left India, she may not have imagined setting in motion a migration story that crossed generations and continents.

With Nani’s death, I began to grapple with the immigrant realities my parents had silently coped with all these years: the pain of loss complicated, inevitably, by great distance.

Affad Shaikh is a digital nomad currently working as a Project Manager for a San Diego investing firm. Living in Southern California allows him to pursue his love of the great outdoors and traveling. A University of California, San Diego graduate, he does good by serving on the non-profit board of the Interfaith Movement for Human Integrity. This piece is a product of the 2016 Voices of Our Nations Art Foundation summer workshop with Faith Adiele.