This Funeral Changed How I Feel About Weddings

Many clergy will admit they would rather perform a funeral than a wedding. I used to be one of them. 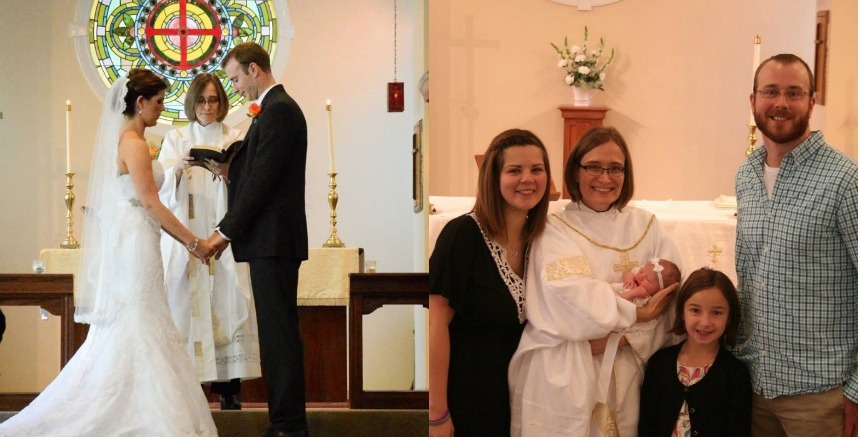 The author, officiating at Whitney and Eric’s wedding; the author with the Major family at Reagan Elizabeth’s baptism. (Courtesy of the author)

The Major wedding was my favorite kind of wedding: small, and at the church. No one was late. Many clergy will admit that we would rather perform a funeral than a wedding. Weddings have become shows, while funerals remain religious services. I used to be one of those clergy, until I had to bury Eric Major two years and four months after his wedding, when he was 33.

I usually don’t attend wedding receptions when I am the officiant. I’m an introvert, so they are torture. I rarely know anyone beyond the bride and groom, and there’s often a drunk uncle who “has” to tell me I don’t look like a pastor or he doesn’t think women should be ordained.

I made an exception for Whitney and Eric, and was glad later, as it gave me a chance to get to know his family a bit. Whitney and her mom were the members of St. David’s, the Episcopalian church where I serve as rector (senior pastor) in Richmond, Virginia. The Majors were Lutheran, which is a lot like Episcopal, but without candles and unction and incense.

I hadn’t met Eric until our first premarital guidance session. I asked them why they wanted to get married at St. David’s. Eric answered, “Honestly, I’m not trying to be disrespectful: I don’t care if we have it in this church. Or any church. We’re having it here because Whitney wants to.”

Whitney’s eyebrows went up. I told him how much I appreciated his honesty, and then we talked about why Whitney wanted the wedding in the church. She’d grown up at St. David’s. Her father’s funeral was at St. David’s when she was a teenager.

“Of course. That’s what she wants.” He shrugged.

Eric and Whitney, along with his young daughter Taylor, began attending the congregation after our first session. I suspected they would stop coming after they were married, but they continued to attend for almost two years, until he was too sick to come anymore.

Eric was diagnosed with an inoperable brain tumor about a month shy of their second wedding anniversary. Whitney was eight months pregnant. I went to see him in the hospital the day after his diagnosis, and offered to say a prayer and anoint him with oil. To my surprise, he said yes. As I took my oil stock out of my purse, he asked, “Is that the good stuff?”

“Good stuff?” I was perplexed.

READ: Saying I Do, and Saying Farewell

“I remember a children’s sermon,” he said. “You had some good stuff in the box.”

I typically put something in a box for the weekly children’s sermon. “That must have been chrism, for a baptism,” I explained. “That’s oil blessed by the bishop. This is unction, used for healing.”

After I anointed him, he asked me to anoint Whitney, too. I offered to come again the next day. He said yes, and added, “Will you bring the good stuff this time?”

On Monday, I anointed him with chrism, and he insisted I anoint Whitney again, as well as his parents. When I met baby Reagan Elizabeth the following month, just hours after she was born, I anointed her with “the good stuff,” too.

We baptized baby Reagan two weeks later, in November. She did not cry. But I did.

READ: 9 Funerals and a Wedding

In February, on Ash Wednesday, Eric was moved to palliative care. He lingered for more than two weeks. There comes a time while visiting dying parishioners when I stop feeling I am there for the one dying and instead feel I’m there for their loved ones. I was still at Eric’s side but mostly I was sitting with Whitney.

The night Eric died I anointed him one last time, and never used that particular bottle again. Eric’s chrism still sits on my desk, in a tiny drawstring bag with his and Whitney’s initials and their wedding date, a favor from their reception.

His funeral was nothing like the small wedding two years earlier. It was the largest funeral we’d had in the five years I had been at St. David’s. Cars were parked all over the grass. Some people had to stand, while others sat in the entrance area and listened to the service through an overhead speaker.

As I followed the casket, Whitney, Taylor, and Reagan out of the church, I remembered following Eric, Whitney, and Taylor on the same path after the wedding. That was my moment of conversion. More weddings, please.

The Rev. Elizabeth Felicetti is the rector of St. David’s Episcopal Church in Richmond, Virginia. She is pursuing a low-residency Master of Fine Arts in Creative Nonfiction at Spalding University in Louisville, Kentucky. She tweets at @bizfel.