Unpacking That Last Box — Once and For All

After my boyfriend died, I clung to his things as a way to stay close to him. Eventually, I realized I didn’t need to. 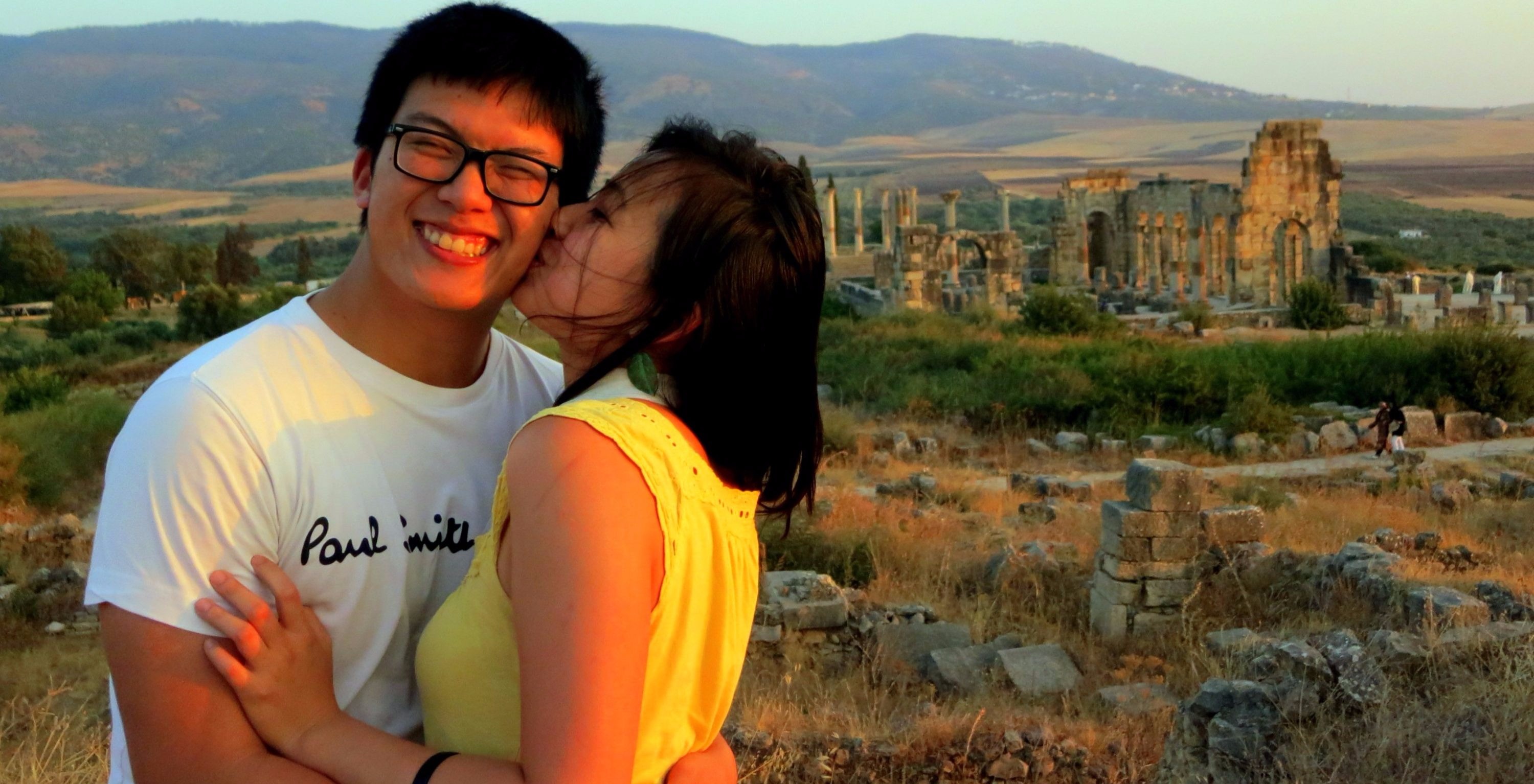 The author and her late boyfriend, George. (Courtesy of Li Yin)

I wobbled my way through the white sterile-smelling hallways of San Francisco General Hospital and robotically pressed the red button that lit up ‘4’ in the hospital elevator. It was New Year’s Eve, and George was in the Intensive Care Unit.

The nurse walked me into his room, violating the policy of only allowing immediate family. I was just his girlfriend, but he had no family here. The thing that laid in that hospital bed was not George. His head was an enlarged alien shape, shaven, with darkened stitches from the emergency surgery that had removed the top half of his skull to relieve brain pressure. The edema caused by the impact to his head from the car accident prevented blood from flowing in, effectively killing his brain.

George was proclaimed brain dead a day later, at 24. Just like that, I lost the love of my life, the man I’d thought I would marry, the future father of my children.

In the months after George died, I could not make sense of how someone could just suddenly disappear. The remnants of him proved he was indeed once here, like clues for a search that I could never complete.

The grief hit me so hard that I left San Francisco  — every street corner jabbed at me with reminders of losing him. Especially the highway ramp where the accident happened that I walked by every day because it was right next to my apartment building. I packed my life into a tiny 8-by-5-foot storage unit, all of George’s things I could not let go of stuffed into one box. I had lovingly labeled it with his name and the date I put it into storage, which would have been his twenty-fifth birthday. I couldn’t leave without celebrating his birthday in our city. Who would celebrate his birthday for him if I didn’t?

Two years later, after working abroad and then quitting my job to travel the world, it dawned on me that I had kept myself away from this forsaken city so I didn’t have to face what was here. I finally decided perhaps it was time to peel back the layers, to find home. Returning to the city meant going to storage and digging out that box. For weeks, it sat in my newly rented apartment untouched. It taunted me. All I had left, all I could ever have of him was in there, including the little snatch of his hair the ICU nurse gave me.

When all my other boxes had been unpacked, the inevitable moment came to finally face that box.

First, I saw the glittery pink floral box George had give me as a gift for my birthday. It contained the sentimental items I kept when he was alive, like my ticket stub from the concert where we met. It was when I helped his parents pack up his room that I saw he had kept his, too. I traced both their edges and knew I couldn’t toss them any more than I wanted to toss the memory of the night my life changed because he came into it. I kept all these things because I was afraid of losing our memories, more precious because memories with George can never be created again.

READ: How To: Sort Through What’s Left Behind

Then there were scented candles and bath salts George ordered to surprise me with a spa night at home. I smelled the candles and envisioned for the millionth time us cuddling and laughing in the bathtub. We never got to use them. I kept them, refusing to ever use them, as though by keeping them I would also keep alive the dream that I would use them, one day, with him. I was trying to hold on to the future I’d lost — the trips we planned to take, the wedding we should have had, even the retirement home where we’d hold hands with white hair in rocking chairs.

Next I pulled out George’s well-worn copy of Dale Carnegie’s “How to Win Friends and Influence People.” My fingers ran through its beige pages, tugging at my heart. It wasn’t just a book, it was the man that George was. His amazing ability with people and his incessant desire to make people feel good about themselves made me fall in love with him. He took care of me that night we met at the concert, holding my hair as I puked my insides into the toilet from having “too much fun.” He made me feel beautiful even then.

The few times we argued because I felt neglected, he never accused me of being irrational or justified what he did to make me feel that way. He’d say, “Honey, it must’ve taken so much courage to be honest about how you feel.” What would have been an irrational woman to other men I’d dated, to George was an honest and brave woman. With him, I was the best me I ever knew, because he was the mirror that reflected the best me I already was. I kept that book because I was afraid I’d lose who I was when I was with him.

There was so much eclectic stuff in that box. A ziplock bag of George’s colognes to remind me of his scent, which I miss as much as I miss his body next to mine. His Brazilian Jiu-Jitsu Gi, the competition gear with Stanford’s emblem of a red block S with a pine tree, that he proudly wore that night he showed me how to pin him to the floor, pretending to struggle in order to make me laugh. I miss how he expanded my horizons. I miss how he made me laugh. I kept all of it, desperately trying to hold on to him in that box, in all that stuff.

To my surprise, I didn’t cry while unpacking that box. Instead, I had a curious thought.

Hmm… I should put that book with all the other books… the bath salt with the other bath salts.

It was a miniscule moment. It was a mundane task of organization. But it meant a lot, because it was the first time I was separating George from his stuff. It took me two years to realize: George isn’t there in that stuff, just like he wasn’t that thing, that mangled body in the ICU.

There is not a day that has gone by without me remembering something about George. I don’t need to be afraid of losing the memories.

Even today, 3.5 years after George died, I still have new experiences with him. Not the dreams I envisioned, no. He isn’t physically here. But just the day after I unpacked his things, I took his Gi to the mixed martial arts gym he went to and donated it. The man who took it promised it will be well used. I smiled, motioning to my heart to show that it was sentimental, but I didn’t mention George. I didn’t need to anymore. It was a new experience arising out of the old, just like hundreds of new experiences I still have because of George. He is always there in those new experiences.

The most precious thing George gave me actually wasn’t in that box I’d put in storage. Instead, it is a tiny rock that rests on my bedside table. It was the first gift I gave George, a souvenir from New Zealand, painted with two little kiwi birds holding hands. He told me when he saw it that I was his rock. I couldn’t part with it when I’d put his other things in storage. I used it to reach out to him. He was my rock. Whenever the grief hit me hard, I’d squeeze it hard, as though if held it tightly enough, the pain would go away, as though the strength of the rock itself was the strength George would help me find in myself.

That rock still sits by my bedside, but when I have a really hard day like the day I unpacked that box, I don’t need to reach for it anymore. I simply think of George, the way he’d always say “Honey, I’m proud of you.” When I don’t think I have the strength to deal with the pain, I think of him and find it. I have found him in me. He gives me strength to face fear, to be the best me. That strength isn’t there in that rock. That best version of me isn’t there in that book. And our love didn’t end when they unplugged that machine in the ICU.

Li is a San Francisco-based writer and yoga instructor specializing in grief yoga. Find her at natarajyoga.com.