A couple built a game inspired by the life and loss of their young son. I’m a bereaved father who played it. Here’s my experience. 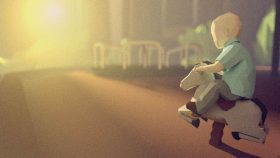 Around the time Amy and Ryan Green’s third child, Joel, turned one, he was found to have AT/RT, an aggressive pediatric cancer of the central nervous system. Surgery, radiation, and aggressive chemotherapy were employed, but another tumor emerged anyway. Initially given four months to live, Joel lived another four years, until the cancer finally killed him in March 2014.

Ryan is a video game developer, and Amy is a freelance writer. Their desire to memorialize their son led them to take a groundbreaking step: to create a video game about Joel’s life and death, and their experience of living through that process. The result, That Dragon, Cancer, was released for Macintosh, PC, and the Ouya console on January 12th, 2016, with a Linux version coming soon.

First, disclosures. I was an early backer of That Dragon, Cancer on Kickstarter, and backed it at a level that allowed me to place artwork by my daughters Carolyn and Rebecca into the game. Furthermore, my daughter Rebecca died of brain cancer on her sixth birthday in June 2014. So the topic is very close to me personally.

That Dragon, Cancer isn’t a game, by most definitions of that term. There are no structural barriers to advancing, no opposing forces to overcome, no points to score nor prizes to unlock, and no way to influence the outcome. The only choices you can make are how much of the content to experience, and how quickly you move through the storyline. It is, to my eyes, much closer to a movie than a traditional game, but the control the player exerts over pacing and discovery makes it far more engaging and affecting than any movie I’ve ever seen.

In the end, That Dragon, Cancer is something for which we don’t have a convenient term. It’s a window into other lives that says far more in its two hours than most other forms of media could manage in four, and might even have created a new genre of video games combining that personal window with a console. For the sake of convenience, I’ll continue to refer to it as a “game” and those who experience it as “players,” but I wish I had more honest words to use in their place.

As for a review, it’s difficult to discuss without lessening the impact of the game. I initially debated whether to explain the backstory but eventually came to realize that – just like in a movie one watches repeatedly over the years – knowing how the story ends actually heightens, not lessens, the game’s effect. Your heart breaks for the Greens even as their hearts do not break, in their moments of unknowing hope. Then, when the hopes go unfulfilled, your heart breaks anew.

The game presents itself in a heavily stylized 3D, with human figures looking almost like cartoons of rough carvings, and lacking facial features (other than eyeglasses on a couple of characters), a technique that makes the entire experience curiously more intimate. The constantly shifting viewpoint allows the player to be both observer and participant, evoking the feelings of being both a close confidant to the Greens and of taking their places. Most of the dialogue comes from Amy and Ryan, in their own voices. The spare soundtrack shifts effortlessly between from one mood to another, always illuminating the moment without overwhelming it.

The music, like the dialogue and the scenes we’re presented, can only be described as honest—not in the sense of accurate in the details, but of being fundamentally truthful. What’s remarkable is how clear-eyed the Greens are in every aspect of the journey. Even their anger, disgust, and envy—with each other, with themselves, with the world—are all presented without varnish, but also with judgment. As difficult as it must have been for the Greens to be so open, it must have been doubly hard to avoid excusing or condemning themselves.

So, too, are the Greens very honest about their faith in, and doubts about, God. A fair portion of the game presents their hopes that God will heal where medicine could not, as well as their growing fear that Joel will not survive. The two threads entwine and comment on each other as the game moves into its final levels. What astonished me was how That Dragon, Cancer presents these questions of faith with such clarity and neutrality that you can legitimately see this aspect of the game as either a powerful affirmation of the power of faith, or as a scathing indictment of the futility of faith, based solely on the Greens’ words and how they are presented.

READ: 7 Tips for Speaking with a Bereaved Mother

This is but one of the many levels on which the game operates. It challenges you to endure the immediate events of the story even as it provokes intense reflection on what we believe and how we believe it. The game leverages its medium brilliantly, using common game mechanics to comment on the nature of the Greens’ challenges, and employing artful design to weave disparate emotions together—sometimes with great subtlety, and other times quite jarringly. There are radical, unannounced shifts in time and perspective, in which thoughts and scenes jump across hours or years. It’s an astonishingly accurate portrayal of how stress, fear, and grief disrupt the sense of linear time, both in the moment and when looking back in memory.

I’ve asked other players of That Dragon, Cancer about their experience in playing the game, few if any of whom have been through similar experiences in real life. I found that most of them had to take a break from playing the game partway through, and all of them took their break on the same level of the game—the level that was, according to Ryan, the nucleus of the entire game; and those who didn’t take a break said that level was the point where they almost did.

This is a gift that the Greens have given, possibly unintentionally, to those who play That Dragon, Cancer. Because as you go through this journey with the Greens, you always have the final say on whether things will progress or not. You can walk away from the game and do something else, secure in the knowledge that nothing is happening. You can stop short of Joel’s death, if you must. That’s the real benefit of being a game player: you can make that choice. You can decide to pause for a while, to reflect on what you’ve felt and regather your emotional reserves, while time does not progress and Joel gets no closer to dying. Families like the Greens, or like mine, didn’t have the luxury of a pause button.

It’s understandable if a reader’s first reaction is that playing the game sounds scary. I was honestly terrified as I started That Dragon, Cancer for the first time, not sure if I’d be able to get through it in one piece. But I was glad I’d played. It wasn’t easy. There were moments that shortened my breath and made my throat ache with sorrow. Parts of the story are legitimately harrowing—but other parts are peaceful, contemplative, thought-provoking, even joyful. Some moments are all of those things, and more, all at once. For me, the game became a prism through which to examine my grief and my relationship to it, refracted through the Greens and their story, and I was profoundly touched by it.

That Dragon, Cancer is an astonishing look at how one family dealt with the most piercing questions of life and death. It’s a difficult journey for anyone to take, whether or not they have suffered loss, but it’s an astonishingly complex and human work of art that I was honored and grateful to be able to take with the Greens. The thoughts and emotions I experienced while playing That Dragon, Cancer still linger with me, and I expect they will for a long time. If you’re ready for a video game to make you smile and weep and smile as you weep, to show you a family’s life with unflinching honesty and a complete lack of sentimentality in the face of some of life’s most difficult passages, I cannot recommend it highly enough.

Eric Meyer (@meyerweb) is a longtime blogger, author of several technical books, co-founder of the web design conference An Event Apart, technical lead at Rebecca’s Gift, and a bereaved father of two.