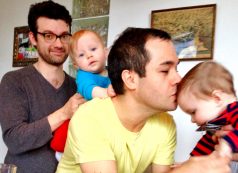 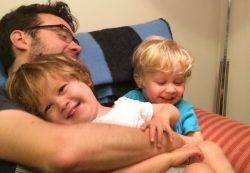 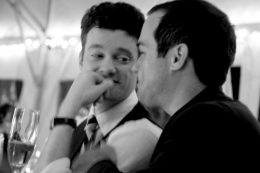 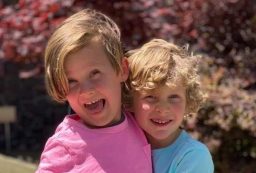 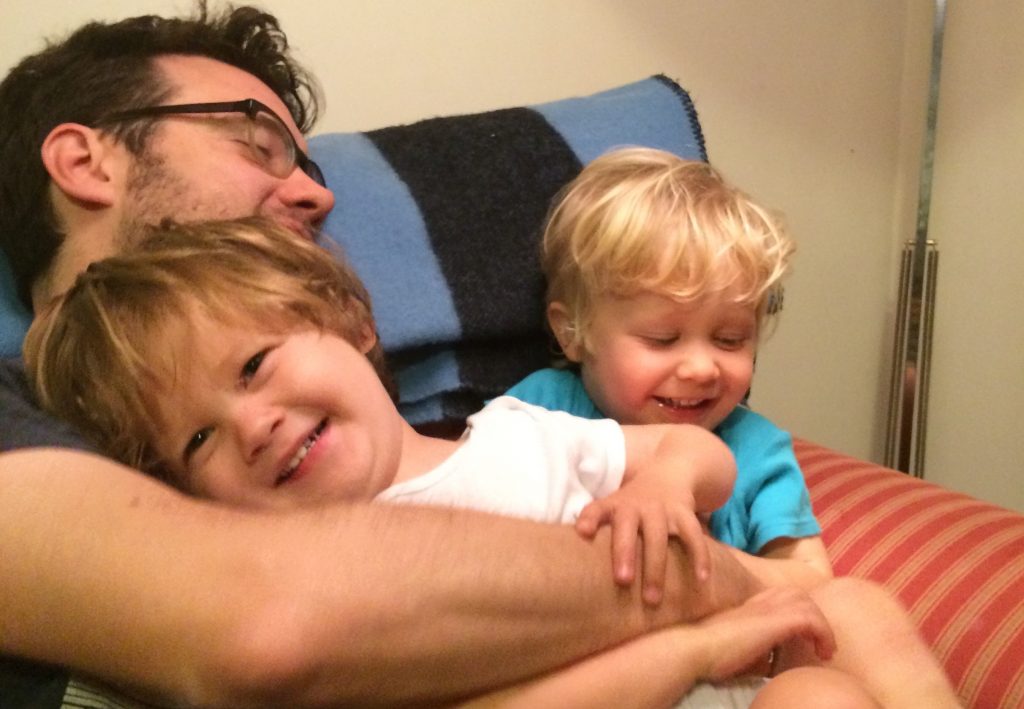 Every inch of me needed a break,  so my mom took the boys to a playground down the road. It was young for them but there was a fence, so as they scooted or swung, you at least knew they wouldn’t dart into the street. And it was the one kid-friendly place I’d discovered in Berkeley, during a week devoured  by unpacking, anticipation, and parenting by avoidance.

Once they drove off, I was alone for the first time in our new house. I cried a tangled mixture of exhaustion and grief, leaving me with a plugged nose, bloodshot eyes, and a dull pain in my chest any time I took a deep breath. With the boys’ screeching and scampering temporarily quieted, in this place Lin had never been and never would be, a door opened and out came the sads.

I walked up to my new bedroom and pulled open a curtain covering a closet stacked four or five high with boxes, and fixed my eyes on a leather valise wedged into a corner. It was a slightly ratty, box-shaped thing with a stitched handle, on either side of which was a tarnished metal clasp that you twist to release. It was Lin’s, and it was old, from long before we met, and had been a mute companion from Brooklyn to Rhode Island to Los Angeles, where Lin got off, and then to Berkeley with me and the boys. I’d noticed it before, imagining that some night when the kids were asleep, Lin would describe in granular detail what his life was like when the contents of the case were used, and useful. He’d tell me who he was then, and how it was different or worse or better than now.

I dragged the case out, found a stack of notebooks inside, and grabbed one at random. Written on the inside cover was Lin’s name and the date, early into his freshman year at the University of Oregon. Even though it was 20 years old, the pages were so clean and well-preserved that I felt like an archivist who should be wearing special gloves. I flipped to the middle, and tucked into a manila divider on a loose-leaf sheet, found a poem in Lin’s unmistakable script. I knew that he had written poetry, but he probably felt it wasn’t good enough to share. Or maybe he thought that he’d get around to sharing it, someday.

I want to lie down in the sun

and bask in the glow of the water.

I want my soul to leave my

body through my eyes and ears

and let my doubts drip out

the ends of my hair. I am

floating down the Milky Way

in a bamboo canoe. Spirits

glow inside me, and my fingers

and toes are twenty lighthouses,
beckoning the kindred. Pain
huddles in the doorway. Fear
has lost its fins. I breathe in
the sky and exhale the water.
I pretend they aren’t watching.
The river and I create dances
together, and when we get tired,
we sleep in each other’s arms.
A deep sleep that lets me forget
the struggles and free my
hands of scars. Forget paper
and pen and their tragic
electricity. Forget this mortal
coil with the rattle at the
end. I want to make contact
and know that it’s a miracle. A
miracle without a pen that is not
bound in paper. I want history
inside. I want to leave all this
vertical behind. I want to lie down
in the water and bask in the sun.
-Lin Sorensen, 1995

The room slowed. Lin was 19 when he put this down, with 22 years left to live. Somehow, the words grasped his fate, and in the aftermath, in our new unintended home in Berkeley, I was astounded and unsettled and comforted all at once.

I called Lin’s dad to tell him what I’d found. He was struck too, and what’s more, said he was taking a class on Milky Way photography the following weekend. The next day, I slipped the poem onto the clipboard Lin and I used to log the boys’ milk intake when they were tiny, and walked to UC Berkeley, where my librarian friend photographed it with a special camera on a pure white background. I made an oversized print of that image, and after Lin’s dad captured a haunting celestial portrait, I blew that up too and placed both in identical frames which I hung at the foot of our bed, of my bed. Two mattes, two glass sheets, and two photos, into one whole. Now, as I go to sleep or when I wake up, I’ll take them in and smile, or stare, and sometimes I press my outstretched fingers to the poem and make contact.

My job now is to curate into existence things that Max and Otis can see and touch and be around — everyday things that will burrow deep into their child’s minds and spur questions that in time might become answers.

On the day Lin died, there was a party at our house in L.A. That’s the only word for it. His dad flew in, as he had countless times when Lin was sick, and with my parents and five or six friends, we danced and drank and held each other into the night, with the same stunned disbelief across all our faces, lit at times by smiles that beamed Lin’s sweetness.

After the others left and the boys were long asleep, it was just me and my dad, who 12 hours before sat with Lin and me at the very end. So much of me was freshly carved out as we stood there saying goodnight, and then Lin’s hand was on my left shoulder, steadying me, comforting me. I cried out in shock, then formed some words to explain to my dad what had happened. He and I shared one last hug for the day, and I continued to my room, shutting the door behind me. 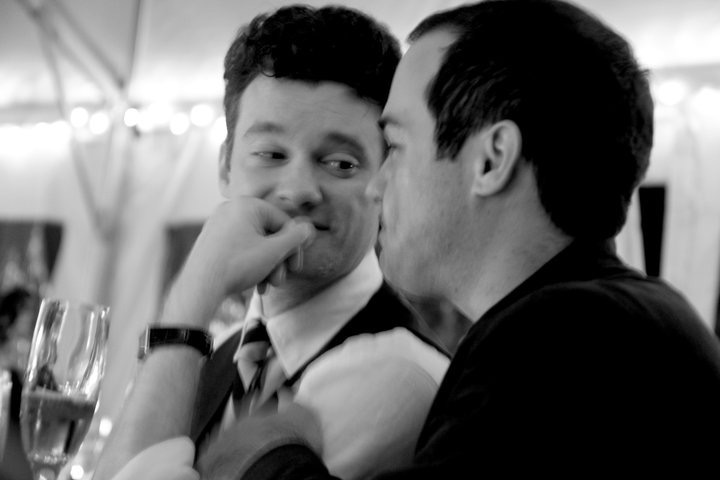 Lin and Marc on their wedding day. (Courtesy of Marc Sorensen Leandro)

The Klonopin was kicking in when my phone dinged. “Can you talk?” read a text message from an old friend back East who must have heard. Can I talk? Thirty seconds later, we were on the phone. He’d been into the whiskey and we cried together, and the only words I remember at first were, so unfair so unfair, I know I know… I know. Before we hung up, he told me how much he loved Lin, and that he wished there was something he could do beyond words. With my heart all filled up and just hours into freefall, and I came up with something.

I moved from Rhode Island to San Francisco in the mid-1990s,  around the time this same friend took up woodworking. At a going-away party, he gave me one of his first creations, a compact cherrywood box, inlaid with a brushed stainless steel top. When you open the brass-hinged lid, a small circle cut-out of the metal from the other side reveals itself. At 24, it was the finest thing I’d ever owned, and it became a repository for all my prized ephemera. I moved at least 10 times in the two decades that followed, and I always packed the box with care, tenderly wrapping it in towel after towel, and placing it in a backpack I kept by my side, while lesser belongings clattered around in the back of the U-Haul. 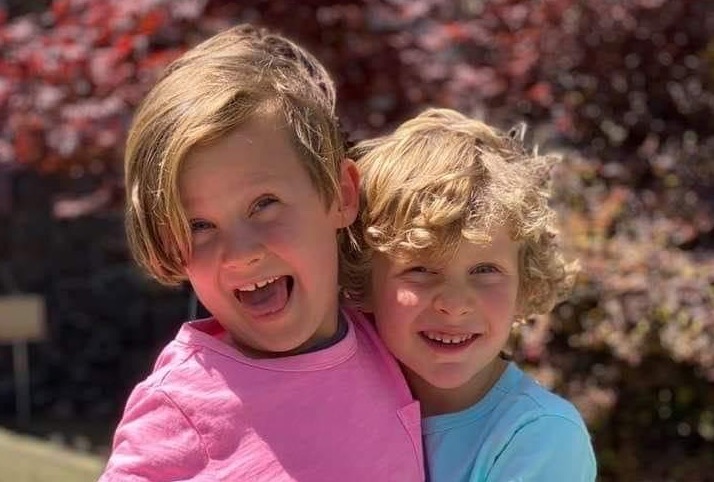 “What about recreating the box? The same but bigger, as a reliquary for all things Lin, for the boys to have one day?” He said yes right then, and six months later, just before Lin’s memorial, it arrived. Larger and even more beautiful than its predecessor, it was identical in design with two differences: the word Lin, carved by hand inside, and the inlaid stainless steel top buffed to a brilliant mirror finish that would ward off a vampire. When the boys are old enough, inside they’ll discover among other things,  some of Lin’s writing, a bundle of kitchen-counter notes he and I left each other in the early Brooklyn days, a printed dinner menu from our wedding, condolence cards, his eyeglasses, his wedding ring, and a vial of sand from the last time we were together at the beach as a family.

Objects are big with me, now, like an energetic tether that connects me to Lin. And our boys, they’re at an age where things dig deep grooves. Not long ago, I wrote myself a note that I titled Cornerstones of Continuity/Remembrance. The framed photographs are No. 3 on that list, and the boys have already started asking about their backstory. And the wooden box and its contents are No. 5. My job now is to curate into existence things that Max and Otis can see and touch and be around — everyday things that will burrow deep into their child’s minds and spur questions that in time might become answers.

These are delicate days, and my wish — more than anything I’ve ever wished except that Lin would live — is that our boys won’t spend years fumbling into sharp, dark cul-de-sacs in an effort to find him. I want to make him known. I want continuity, like when they were 4½ and he was still alive, but also like he’s putting them to bed and taking them to soccer practice and sitting in the front row of their high school graduation with tears welling up in his eyes. I’ll fail in this goal, because he is not here, and because the boys must quest their quests. But I can light the road, and I can draw maps, with guardrails and markers, affixed with neon arrows that flash brightly and say to them, “Your Papa is right here.”

The boys arrived back from the playground with their batteries depleted and their edges smoothed. They found me puffy-eyed, sprawled on the carpet in my room surrounded by Papa’s notebooks, and climbed onto me, nuzzling and giggling and generally being the puppies that they are. The pendulum of my heart swings unpredictably between gratitude and despair every day still, two years after our world blew up. And sometimes, I’m dead sure that I can’t do this. But then, the silliness and warmth and light that shone on us for so brief a time presses through and I think, maybe I can.

Marc Sorensen Leandro is a writer and private chef who now lives in the San Francisco Bay Area with his boys, Max and Otis. He was a contributor to Huffington Post, and his work has been featured in Out Magazine and American Circus, among others. Find him on Instagram at @marcbenjamin1.