Finding New Meaning in My ‘Tree of Life’ Necklace

After my fiancé died, I took off my favorite pendant. After Pittsburgh, after Jeffersontown, I put it back on. 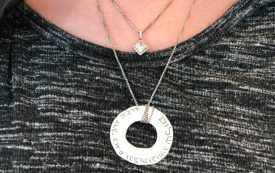 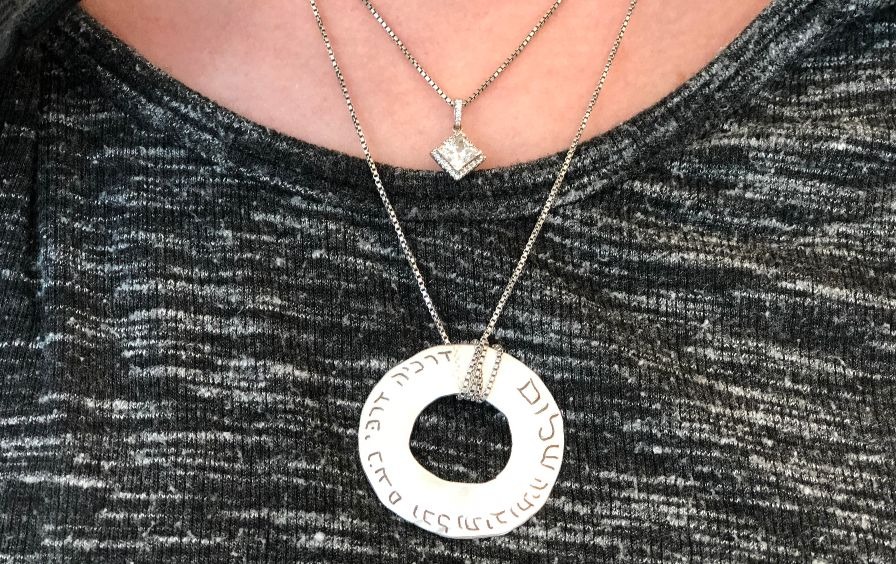 I was finally getting back to Israel. It had been nearly a decade since I was last there. I couldn’t wait to visit Hadaya, a Jerusalem jeweler who engraved silver discs, worn on chains, with the text of one’s choosing. I’d gone to Israel with my youth group years before, before Hadaya discs became the souvenir of choice — cliché, like pumpkin spice in October — among American college students and 20-somethings. Most popular: the  “bagel necklace,” named for its shape.

So when I found myself in Israel, I ordered the necklace. And not just one for myself, but several for a few of my closest friends. I chose to have mine engraved with the one text I knew needed to go on it.

I chose a line from the prayer Etz Chayim, Hebrew for Tree of Life. This prayer is sung, joyously, as Jews return the sacred scroll of the Torah, back to its ark, after completing the weekly reading of the text. The first line of the song declares “It is a tree of life to those who hold it tightly, and all of its supporters are happy.” And then, the line I chose: “Its ways and its path are those of pleasantness, and those who go with it go in peace.”

When I went to purchase the necklaces, I also kicked in the extra cash to have an artistic rendering of the Jerusalem skyline on the other side of the disc. Basic, but hey.

I wore my Etz Chayim bagel necklace constantly. It represented my favorite idea in Jewish thought — that Torah is pleasant, and those who live by it live peaceful lives. But then something happened: My favorite teacher of Torah, my fiancé — he suffered greatly, and then he died.

I took off the necklace because it felt like a lie.

READ: Is My Necklace a Family Heirloom? It’s Complicated

That was almost a decade ago. The necklace sat in my jewelry box. When I tried to wear it since my fiancé died, it has never felt right. And then this past Saturday morning, Jews like me were in a synagogue  — rejoicing in prayer, gathering as a community — were gunned down where they prayed.

A week prior that same synagogue, Tree of Life in the Squirrel Hill neighborhood of Pittsburgh, had hosted a Shabbat that raised awareness for supporting refugees. After all, we Jews were refugees before. In Egypt. In Europe. I could keep going. And this murderer decided to “kill all the Jews” for supporting those fleeing their homes, due to war, violence, poverty, persecution.

So at around the time when synagogue-goers would sing the line inscribed on my necklace, 11 Jews were killed in their house of worship named, yes, Tree of Life. And that was just three days after a gunman in Jeffersontown, Kentucky, allegedly motivated by racism, gunned down two African-Americans who were shopping in a grocery store that sometimes asks you to tack on a dollar to your bill to support a worthy cause.

These victims, in the synagogue, in the grocery store — they did not get to go in peace. But we humans, all of us, have to figure out how to make peace and to bring back pleasantness in honor of the lives lost. Which is why I’m digging out my basic bagel necklace, my Tree of Life. I will wear it and remember, when I vote, when I teach, when I shop for groceries, when I pray.