That Time I Had A Pre-Funeral Beauty Supply Store Meltdown

I went in for waterproof mascara but came out with so much more. 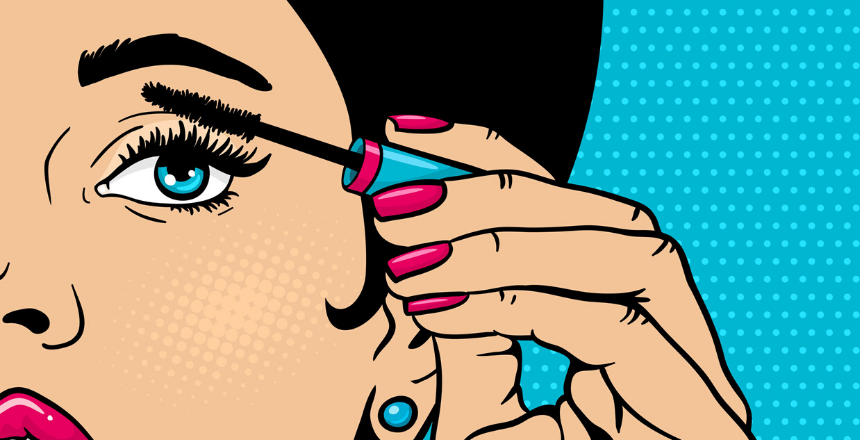 When my mother died the day of a massive snow storm, my sister and I decided to postpone her funeral until the Spring. “She’s getting cremated anyway, and it will be so much easier after we’ve had a few months for everything to settle down,” we’d said. “Our grief won’t be as fresh by then,” we’d said.

What sweet unwitting fools we were.

As the date of my mother’s memorial approached, the To Do list for it had only grown and grown like some kind of cursed drug store receipt and our hot, bottled-up grief had just begun to boil over. My sister and I were in near constant contact on the phone — juggling the politics of family, nosy phone calls from our mother’s one-time friends, and e-mails with “certain individuals” who were absolutely under no circumstances (!!!!) to speak at the service — as I wandered through a series of department stores in search of a funeral appropriate black dress.

Salesperson after salesperson cornered me as I swiped through the racks and asked, as salespeople are wont to do, “Can I help you?”

I closed my eyes and imagined responding honestly to them. Well, my mom’s dead. Can you bring her back to life? Because otherwise, no, you can’t help me. Instead, I’d say no thank you and slink away. Once in a while I’d muster up enough confidence to say, “I’m looking for a black dress that isn’t low cut. Or short. Or covered in flowers. Or flashy or sparkly or beaded or sequined in any way.”

“Um,” they’d reply, raising their eyebrows as if I’d asked for the moon. “It’s Spring. We don’t have anything like that.”

By the time I abandoned my doomed search in favor of panic-ordering ten black dresses online with plans to return nine of them, my face was bright red from the strain of holding back scores of unshed tears and a few blood curdling screams. I made it to the car before I broke and cried over the steering wheel, my fiber mascara rolling off my lashes and sticking to my cheeks like rubbery spider legs.

It was an all too on the nose reminder of the next item on my list.

When I entered the beauty supply store and was approached by one of the saleswomen, I had no intention of doing anything differently than I had during my failed dress quest. I told her what I was looking for and watched as she began guiding me toward the same water resistant mascara I already had. But when I opened my mouth to speak, I surprised myself.

Maybe it was her big eyes, bright and framed by such perfectly separated lashes. Maybe it was that we were approximately the same height and close in age. Maybe I was just tired after so many years of lying — out loud or by omission — to avoid making others uncomfortable. I knew from a vast well of experience that the fallout radius surrounding a dropped bomb like the words, “My mother has Alzheimer’s,” was immense when those words were spoken by someone as young as me; I could only imagine that adding “and now she’s dead!” wouldn’t help.

But whatever the reason, I hesitated for only a moment before I said, “I’m so sorry for telling you this, but I’m just going to. My mom died of Alzheimer’s in January. She was sick for almost seven years. Her memorial is in a week. I need that kind of waterproof mascara.”

The saleswoman’s hazel eyes filled with tears, glistening and held in place between her perfect lashes. “I’m so sorry,” she said. “My grandfather had Alzheimer’s and it was so hard for my mother and I can only imagine how hard it must be to go through at our age.”

“I’m sorry to tell you and put that on you,” I said. “I normally wouldn’t, I’m just… I’m so tired.” I laughed a laugh that felt nothing like a laugh.

“Please don’t apologize! I’m so glad you told me. You shouldn’t have to hold something like that in. Come with me, I’m going to find you the best waterproof mascara we have and I’m going to send you home with as much free stuff as I can get away with giving you.”

“Thank you so much,” I said, taken aback.

Again, she asked me to neither apologize nor thank her. She said she was only doing what she’d want someone to do for her.

I left the store with a shopping bag heavy with small boxes and a heart lighter than it had been mere minutes beforehand. It doesn’t always take a lot of effort to help ease someone’s weight.

That mascara didn’t really do its job in the end. I’ve yet to find a waterproof brand that can withstand the kind of tears you shed when your mother dies. But what I did find was so much better.

In a brief but meaningful exchange I’ll never forget, I learned that not everyone will see the simple truth of my life as a burden. That some people really are eager to help, if we can only find it within ourselves to ask.

Rebecca Emily Darling is a writer and artist living in Los Angeles. She is currently working on a speculative memoir about her relationship with her mother, who was diagnosed with Alzheimer’s when Rebecca was a young adult. You can learn more about her and her work on her website and also find her, and many photos of her cat, on Instagram @rebeccaemilydarling