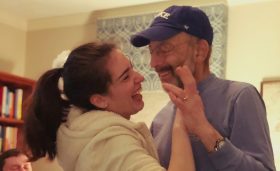 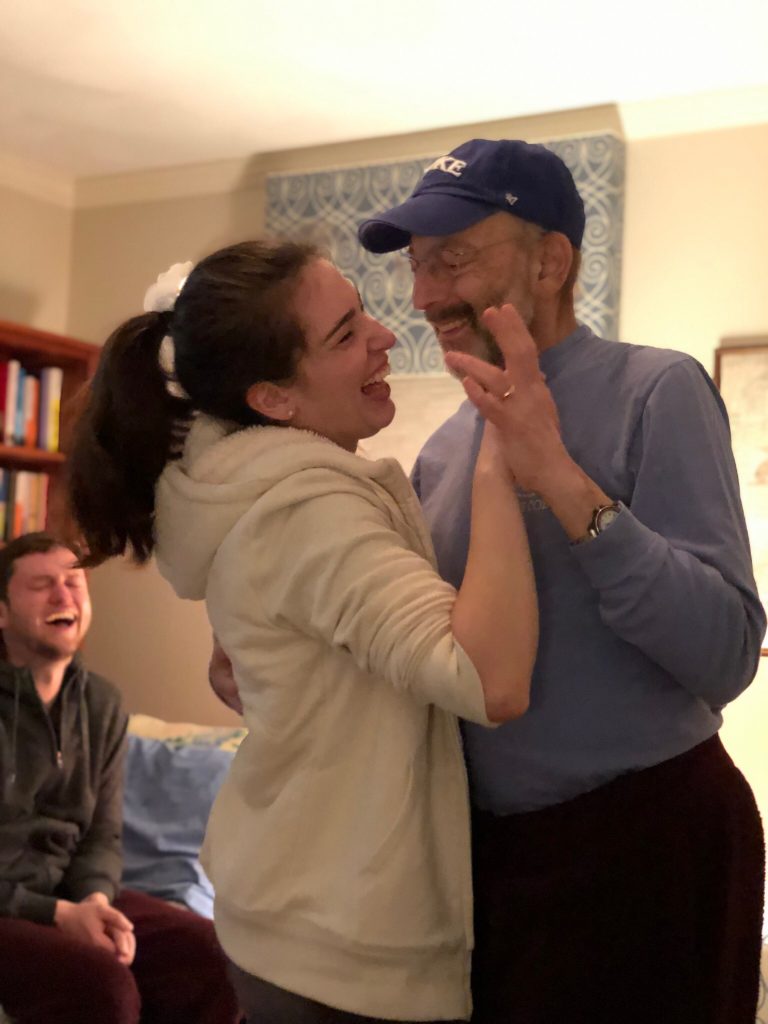 Sarah dances with her dad at her fake wedding. (Courtesy of Sarah Levy)

In December 2018, my family received the terrible news that my Dad’s latest cancer treatment had failed, and his days were numbered. I was planning a wedding at the time. The news of his failed treatment answered our engagement’s omnipresent question: Would my dad make it to our wedding? He would not. At least not the one that we had been planning.

When I arrived at my parents’ house in Massachusetts two days later, Dad said that we could not talk about “The W” yet. If he didn’t say the word, then we didn’t have to admit out loud to ourselves and each other what we knew silently.

Three days later, while eating dinner with my parents, older brother and sister-in-law, we discussed the bleakness of my dad’s prognosis. My dad broke down in tears. He wanted more time to write, to see friends, to be with family. He wanted to be at my wedding. Soon we were all crying — preemptively mourning that he would miss so many other milestones, too, such as my brother’s business school graduation, future career milestones, grandchildren. We were present with each other in pain and love.

But given that my family members are all Type-A Problem Solvers, we talked about all the ways we would include my dad at the wedding. We’d wrap his tallit (Jewish prayer shawl) around us as part of the ceremony. We’d play his favorite songs (mostly Motown and Jim Croce) and sip his drink (Johnny Walker black with a twist.) Anything he wanted we would have there.

My fiancé and I discussed whether we wanted a civil ceremony that would include my dad. The bridal magazines give no guidance on these unglamorous issues. We had no fun infographic to follow as we did for so many other wedding decisions, such as who gets a plus one. I found no etiquette guidance on whether to move your wedding because your Dad is dying. We talked about all of this with my Dad. He cared less about the formality of a marriage certificate and more about his ability to celebrate the wedding. He wanted to dance, wanted to toast his daughter and new son-in-law.

That’s when my brilliant sister-in-law came up with the idea to throw a fake wedding for my fiancé and me. She transformed herself into a wedding planner extraordinaire and deputized my brothers. It would have all the elements of a real wedding, but none of the legality. In just two days, she created a small, family-centered celebration.

READ: Mom’s Memory Was My ‘Something Blue’

Our official fake wedding was on December 22, 2018. We all wore Uniqlo sweat suits after my Dad expressed concern about not being able to wear his regular clothes due to his bloated belly, which was a side effect of his illness. As I tried on a white fuzzy zip-up sweatshirt, my younger brother told me I would make a beautiful bride. The poor cashier at Uniqlo had no idea what was coming when he asked us casually, “Why are you guys buying all these matching sweats?”

Our “wedding planner” had invitations created out of a photoshopped engagement picture and a whole program of activities that were laced with ridiculous jokes in my family’s style of humor. We even had a fake ketubah (Jewish marriage license) drawn up, and we all signed our names.

The ceremony started at 4 p.m. in the family room of my parents’ house. It began with an “exchanging of the wings,” in which my fiancé and I fed each other saucy chicken wings — a surprisingly difficult task. We freestyled our vows while Drake’s “In my feelings” played. We performed three “blessings,” which were really just my brothers and me putting on our best Boston accents from various Boston-centric movies and commercials. Dad gave a speech, which doubled as a farewell toast to us all. He shared that although he will soon not be with us physically, he will always be with us in memory and spirit. He expressed his sincerest gratitude for our time together. We cried as we all finished our champagne and Johnny Walker.

Dad and I danced to “My Girl” by the Temptations (his request). He was a little shaky on his feet. When he spun me — and he insisted on spinning me — I was both thrilled in the moment and terrified we might fall. But we didn’t fall. My first dance at my fake wedding would be the last time I danced with my father.

‘Dad gave a speech, which doubled as a farewell toast to us all.’

Our wedding dinner was take-out from my Dad’s favorite mediocre Italian restaurant. We had hand-drawn place cards for each of us, cupcakes with the bride and grooms’ initials and my parent’s cake topper from 1977 even made an appearance. If wedding magazines covered these things, I believe the decor would be described as “eclectic and sentimental.”

We ended the night in the family room where my Dad’s hospice bed lived. We were all exhausted and drunk on alcohol and our feelings. The night was equal parts devastating and joy-filled, loving and heartbreaking. I never knew such seemingly contradictory emotions could exist so vividly together.  Our fake wedding marked the end of this chapter of my family’s story and the start of a new one for me and my “husband.” My dad died just three days later in the same room where we had celebrated.

In September, my fiancé and I will be married, for real this time — white dress and all. Wedding planning since his death has involved more tears. Beware of “In loving memory” signs on Pinterest! We’ve decided to focus on all the ways Dad will be there spiritually and symbolically. As we promised, his tallit will be wrapped around my fiancé and me during the closing blessing at our ceremony. There will be plenty of Johnny Walker at our reception. And my brothers will walk me down the aisle to a string version of “My Girl.” It’s a song that will forever feel like ours.

Sarah Levy is a body-centered trauma therapist and yoga instructor in Washington, DC.