With the Swish of a Skirt, “La La Land” Triggered My Grief

So did “West Side Story.” Here’s why. 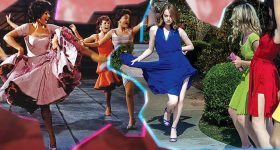 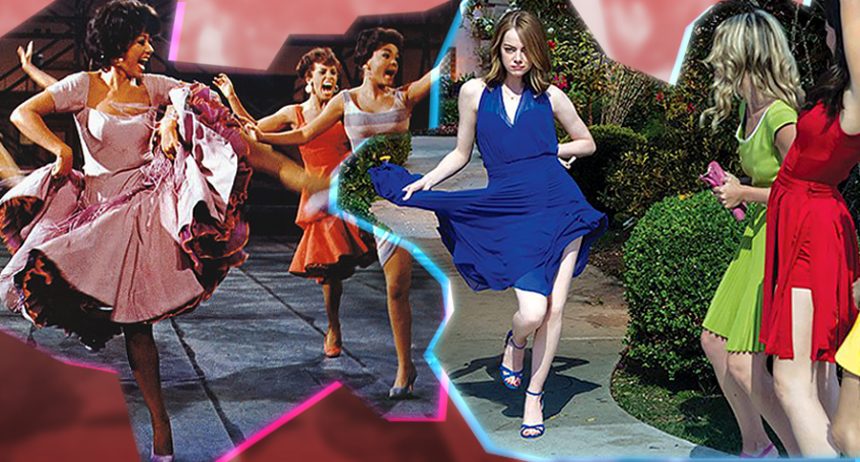 Swish and swagger: Rita Moreno in “West Side Story” and Emma Stone in “La La Land”

Count me as one of the many fans delighted to see “Moonlight” win Best Picture. For one, it was a remarkable, beautifully-crafted film with stellar performances. Also I couldn’t have fathomed any more “La La Land,” since that movie sent me into an emotional tailspin from which I’m still recovering. And not because of Ryan Gosling’s jazzsplaining.

When my wife and I went to see “La La Land” a few weeks ago, I groaned audibly the moment the cast started singing “Another Day of Sun” in freeway traffic, a few minutes into the movie. I couldn’t believe we’d gotten a babysitter for this. About 25 minutes later, however, I was sobbing, my Sour Patch kids made even sourer, sautéed by my tears.

The moment that triggered me was when Emma Stone and her friends, in preparation for a night on the town, grabbed the hems of their skirts in unison. “Are you having a stroke?” my wife asked. “No…it’s my Mom…”

I couldn’t really pay attention to the rest of the movie. Would Ryan open up his musical diner, or whatever it was? Would he get the girl in the end? I didn’t care. I was too wrapped up in trying to figure out what it was about that earnest hem-grabbing that reminded me of my late mother. But I couldn’t. She died about a year ago, and since then, my brain has often felt the way my feet do on a patch of ice. Functional, but unmoored.

The following week, while idly flipping channels, I landed on “West Side Story.” I hadn’t seen it since I was a kid. The songs are great, and the dance-fighting always amused me. Then, in the middle of Rita Moreno’s show-stopping “America,” she clutched the bottom of her— slip, I guess?— and it happened again. A sudden, visceral eruption of tears.

Almost like a post-hypnotic suggestion, there was something about a lady dancing in this very specific way on film that was injecting me into a wormhole to the past. But to where? And why? My mother was neither Shark nor Jet. Other emotionally manipulative forms of entertainment didn’t elicit this reaction in me. “This is Us”? No tears. A well-crafted Super Bowl commercial about puppies? Nothing. I needed to unravel this musical mystery.

My mom, Ilene, died after a long, heartbreaking bout with a nasty disease called Progressive Supranuclear Palsy. It’s an all-star mashup of other diseases — a little ALS here, a dash of Parkinson’s there — that resulted in her slowly, inevitably losing the ability to move, walk, eat, see and speak. The real tragedy, though, was that her mind was totally unaffected. This once-graceful, athletic woman was keenly aware of every agonizing phase of her illness, which had no known cure or treatment. Nevertheless, as she had through every one of life’s shit storms that followed her around like Pig-Pen’s cloud of dust (an abusive father, a loveless first marriage at 17, divorced and penniless with two kids at 25), she persisted.

She understood the hopelessness of her situation and could laugh about it, even though everyone around her was heartbroken. She could communicate with a “thumbs up” or “thumbs down,” and spell out certain words by pointing to letters on a Ouija-esque board.

Toward the end of her life, most of my visits with her followed a similar pattern. We’d talk, cry, laugh, and binge-watch a show. She was quite pop-culturally savvy. We watched the entire final season of “Mad Men” in one day, since she declared she couldn’t die before she knew what happened to Don Draper.

Every time we’d say goodbye, we did so knowing it might be our last. Her final words to me ended up being, “always do what you love.” (It was either that or “Larry’s new at the club”— her speech really had become quite unintelligible at that point.)

I believe those words formed the backbeat of my new condition, the one that made me cry uncontrollably during certain scenes from certain musicals. I was doing what I love; I had a career in TV, generated by the many hours of sitcoms and talk shows my mom and I would watch together. But did she, throughout her life, always do what she loved? For answers, I looked in “The Box” I took from her apartment, the one filled with photos and journals and mementos she’d decided to keep.

I found something I hadn’t really examined before. It was a school notebook of mine, from third grade, when I was around the same age my son Luke is now. I flipped through the crude drawings and handwriting exercises and found a little essay I’d written called “Someday.” It started with some boilerplate wishes for my future: “Someday I’ll be the star goalie for the Montreal Canadiens… Someday I’ll climb Mt. Everest (which is 29,000 feet high) in four hours” Of course none of those things came true– (It took me six hours to summit Everest)– and neither did my next third grade wish, which stunned me:

I gasped, and clutched my hand to my mouth. Suddenly, the memories of my mother as sick and dying were replaced by visions of the young and healthy woman who’d raised me. Throughout her demise, I’d feared I’d never again be able to conjure up THAT version of her. But here she was again.

I remembered the show she’d choreographed at the Y in 1981 (“Give My Regards to Broadway”), where she led a bunch of other young suburban dance Jews in a revue that featured songs from “Hair,” “Fame” and “42nd Street.” I remembered her doing some sort of Charleston number. And…I remembered her clutching the hem of her dress. Just like Rita Moreno did before her, and Emma Stone did after. Both of those women won Oscars. My mother just got to drive carpool.

I remember seeing her backstage, beaming. And I remember feeling so proud to be her son.

This was where the vortices of “La La Land” and “West Side Story” were taking me, to an “Earth 2” where my dance-loving mom was able to follow her dreams before fate, circumstance, two husbands, and four children conspired to end her “showbiz career”. A place where her time belonged only to her.

And now, the last of the many gifts she left me is an amplifier of beauty and music and joy. Even in cinematic pablum like “La La Land.” Wherever characters feel the need to break out into song for no sane, rational reason, I’ll be Facetiming with my mom’s spirit, so grateful to be channeling her aspirations and forsaken dreams.

I’m going to be a fucking mess when “Beauty and the Beast” opens next week.

Paul Starke is an Emmy Award-winning television producer of shows including “The Chris Rock Show,” “The Chew” and “The Tyra Banks Show.” He lives in Brooklyn with his wife Melissa and eight-year old son, Luke.