11 People You Meet in Hell

Minimizers, vultures, happy morons, competitors at the Sad Olympics and other people you’re bound to encounter on your grief journey. 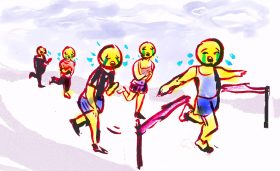 In April 2015, my mom died in a car accident. It was horrible and if you can avoid it at all, I strongly recommend doing so. As I went through the process of planning her funeral, cleaning out her house and figuring out what my life was going to be like without her, I couldn’t help but notice that people really say some terrible things to you when bad things happen. An experience like this really gives one insight into the spectrum of people’s inability to cope with traumatic and awkward situations. Here is a brief introduction to the kinds of people you’re bound to encounter in your darkest moments.

1. Competitors at the Sad Olympics

Actual experts in psychology will tell you grief is complicated. But don’t tell that to people who are already dead on the inside! These are the people who will try to make you feel like a terrible person if you’re doing anything other than shopping for black veils or throwing yourself onto a coffin. Any coffin will do! Aren’t grieving people supposed to be sad? 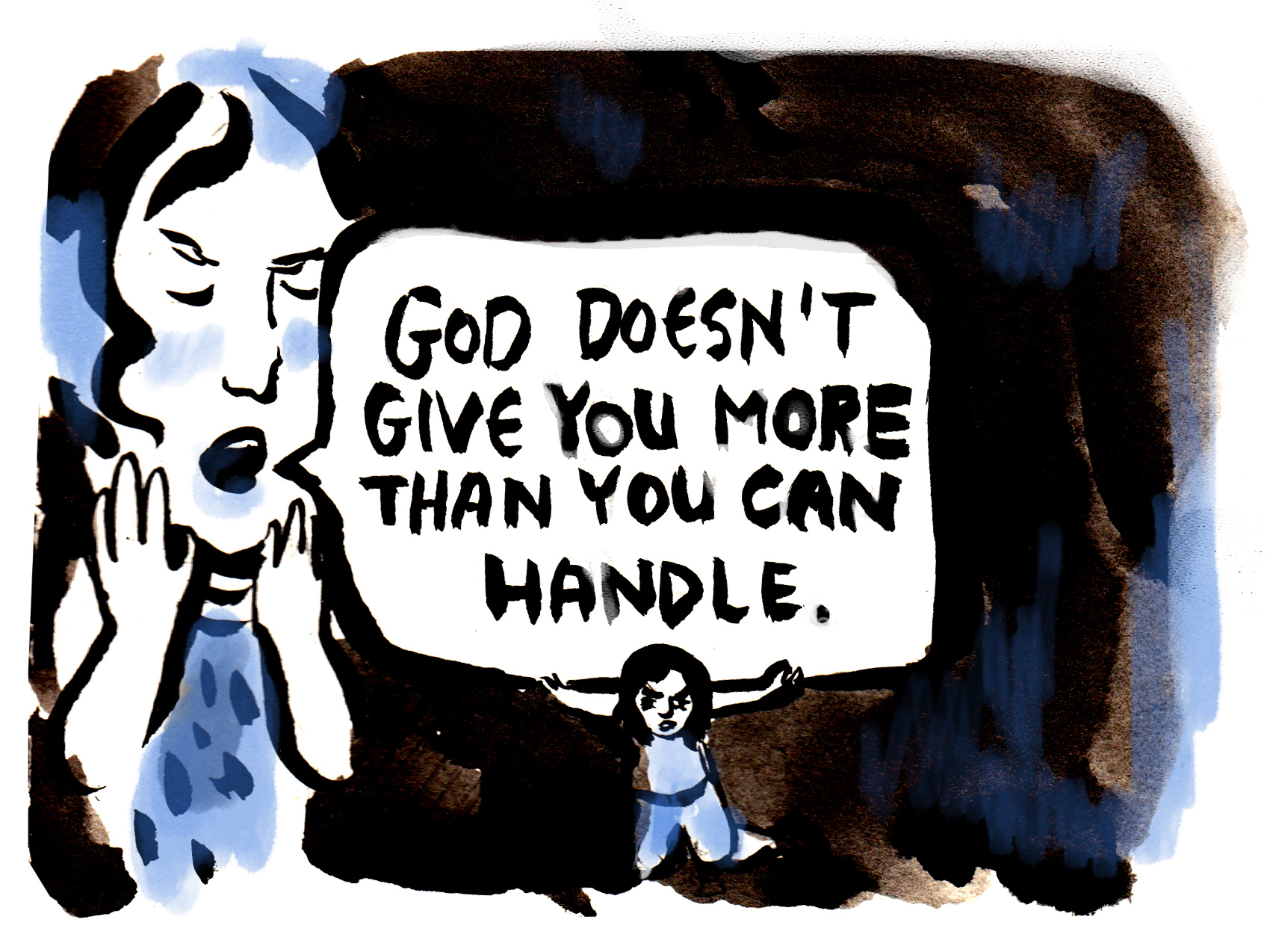 Dismissers and Minimizers are incapable of emotional intimacy or sitting in discomfort, so they will try to shoehorn you back into “being normal” as quickly as possible. There is no platitude too empty or dumb for these folks. Here are a few of my least favorites:

“God doesn’t give you more than you can handle.”

“When a door closes a window opens.” (Doesn’t this mean someone is going to have to climb through a window to leave their present situation? Who wants to do that?)

These verbal acts serve only to get the speaker past their own feelings of powerlessness. People can be uncomfortable for two minutes and not die. It’s really not a big deal.

Literally, any statement that starts with “Well, at least…” does not need to be said aloud. Ever. Just no. This applies to every context and every situation — every single crappy human experience that has ever or will ever exist. Don’t say it. But definitely not when someone has just experienced a major loss.

Empathy is not a finite resource. My only response to people who “remind” me there are starving children around the globe is, “you don’t seem like you’re doing much for them either.”

Another empathy-impaired sect who love to glom onto anyone else’s tragedy to perform their own, completely fake, humanity. These will be the people you barely know who are so aggrieved for you. At first you might think, “Oh no, maybe they lost someone in a similar way?” But upon further conversation, you realize … no, this they’re just Blanche DuBois’ing all over you.

These are the people keeping Nancy Grace in business. They love spectacle and celebrity tragedy and the weight of the entire world in tiny, bite-sized increments. If you’re feeling charitable you might say to yourself, “Here is a person living in a constant state of fear and anxiety that needs new information that meets them at the level their brain is already operating at.” Other times you might think, “Wow, this human troll is actually incapable of real human connection.” 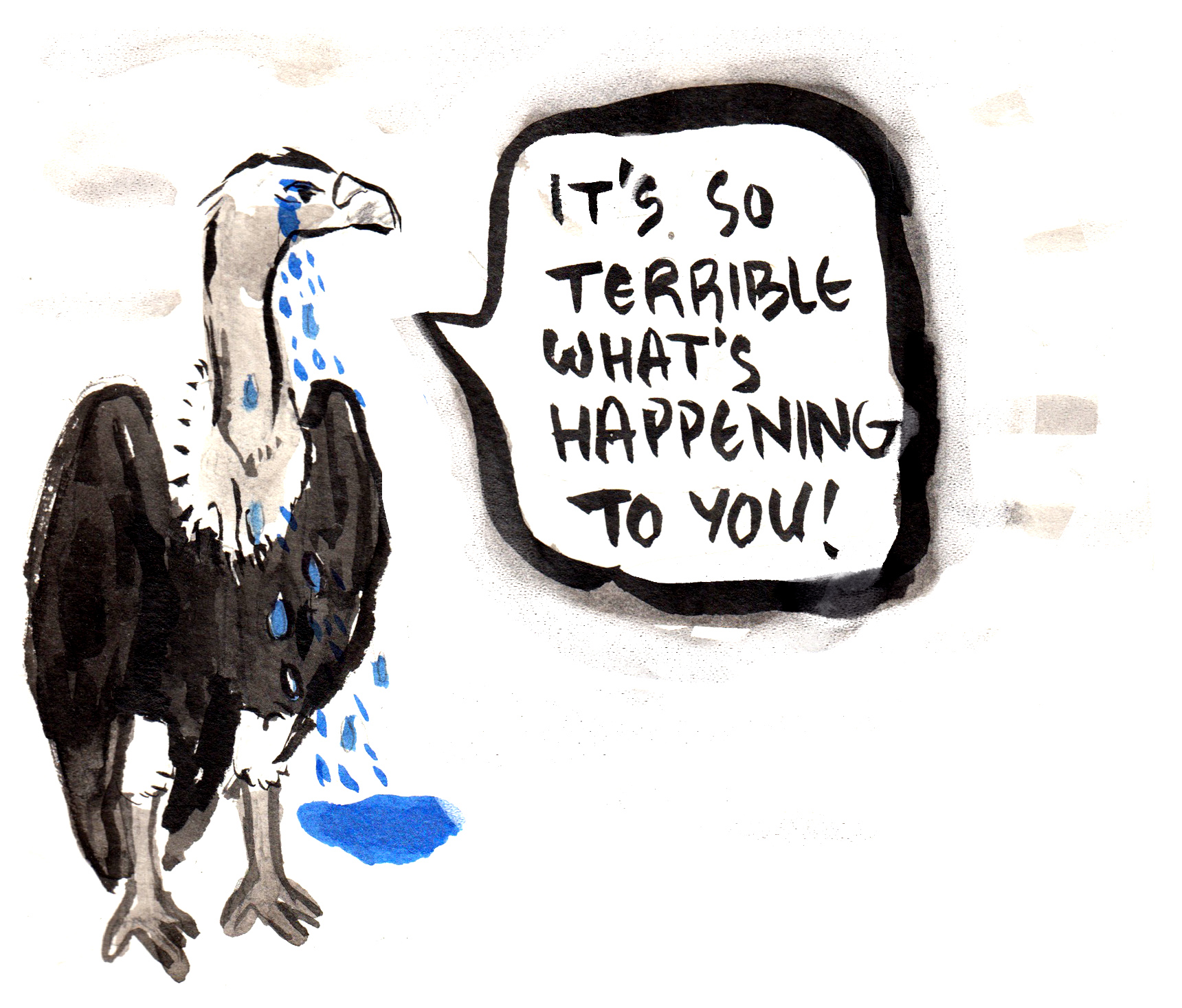 These people want to put you on a pedestal (or lock you in a suffocating glass box) and talk over you whenever things get too messy. They will use words like “brave” and “grace,” while shushing you.

You’ll see this one a lot around horrific acts of violence. Why do so many reporters ask someone who recently had a loved one murdered if they forgive the killer? Who is that for? Who is that serving? You don’t need to behave for anyone.

And by the way: Resilience is something you develop after a loss. Not what you have during the worst of it.

These people show up and expect you to Perform! Your! Sadness! They will ask insanely probing questions or they want the really grisly details of your loved one’s death. They seem to have some sick need to watch you fall apart.

8. Happy Morons a.k.a.,  the “Huh, Did Something Happen?” contingent

Nothing in this world that has happened to someone else could even approach how interesting their lives are. Sometimes these people can be nice to be around (for short periods) because you can temporarily forget anything bad has happened to you. But long-term exposure to people this self-obsessed might wind up making you feel isolated or that your pain isn’t serious.

Luckily, the cure for these people is simple. The nanosecond you mention that you need to talk about what you’re going through, they will vanish. No conflict necessary.

These are people who love to dispense glib inanity in times of crisis. It’s not as invasive as some of the aforementioned types, but it’s like they’ve only learned how to relate to other human beings via greeting cards and fortune cookies. I hesitate to even call these people out because I think this behavior largely stems from being awkward. But it’s my list.

Here’s an example: I’ve had so many random people tell me that “my] mother would be so proud of me for how I’ve handled all this.” Four things, 1. Do I know you? 2. There’s just no way that’s true. Look at how mean I’m being! My mom would put soap in my grown mouth if she saw any of this! 3. My mom is a pile of ashes; I don’t think she’s feeling actually feeling anything these days. 4. I actually prefer that people not vomit banalities directly into my face, but thank you for saying that.

Maybe this is a little severe, but I firmly believe uttering the phrase “Can I get a hug?” should be a firing offense.

11. The “Weren’t You Not Even That Close?” Truthers

A word to the allies reading this: Did something in this list resonate with you and maybe make you feel hurt, ashamed or embarrassed? Don’t worry, on the web, no one can hear you squirm. Just know that hurting someone’s feelings inadvertently is still hurting someone’s feelings and stop doing it. Apologize if you did something particularly egregious, but know that any grieving person has dealt with many of these situations. Part of the slog of grief is how unprepared you are and everyone else is for it.

A word to my grievers: A lot of these garbage reactions are so baked into our culture that whenever possible we should try to be kind to people who are inadvertently terrible. People who show up and are uncomfortable but making themselves available might be given the benefit of the doubt. This is different from people who are terrible and say terrible things during terrible times because they are terrible at their core. Learning to sort out what kind of bad behavior you cannot allow in your life and what needs to be forgiven is complicated but necessary work, even when not grieving.

It’s tricky to figure this out but trust your instincts. If you can avoid being around people who make you feel worse, do so. If you feel mad at everyone for not being perfectly attuned to your mess, take a breath, write in a private journal, go for a walk. If everyone and everything is unbearable, you might be experiencing depression. Which is awful to go through, but treatable; a mental health professional can help.

I hope you have the resources you need to support you in difficult times.

A version of this piece ran on Medium.

Erin Donovan is a documentary film producer based in New Orleans. She’s currently writing a memoir. Connect at: www.erindonovan.com. She’s on Twitter @GoodyErin.

Lior Zaltzman is an artist and the social media editor for 70 Faces Media. Find her on Twitter at @liorca.