And other things the Netflix series ‘Dead to Me’ gets right about young widowhood. (No spoilers here.) 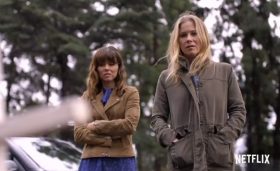 In the hit Netflix series, “Dead to Me,” the real estate is luxe and there is way too much time to sit by the pool with a wine glass in hand, and most of us can’t pull off looking as good in a pencil skirt as its star, Christina Applegate. But there is still so much that rings true about the show’s onscreen portrayal of sudden loss and young widowhood. The show centers on Jen, a widowed mother of two, and Judy, the quirky friend she meets in her bereavement group. From the perspective of this young widowed mother, here’s what the show gets right:

The minor characters in your life may step up — in ways big and small.

Yes, there will be people with casseroles, sometimes with raisins. You will get tired of eating other people’s food, but you will be grateful nonetheless. Social graces may not be your strong suit. (See Christina Applegate’s character, Jen, slamming the door in her neighbor’s face in the opening scene.) But you will still feel tenderness toward the neighbor who says the wrong thing or the pastor, brilliantly played in the series by Keong Sim, who leads your grief group. The minor characters in your life will step into the foreground and shine.

In-laws get (even more) complicated.

Your spouse will be gone, but you’ll still have in-law relationships to navigate, which is hard and weird. Let’s just hope they are not as creepy as Jen’s mother-in-law, Lorna Harding as played by Valerie Mahaffey.

You’ll be grateful for anything that comforts you.

You may find that comfort in wine, in reruns of “The Facts of Life,” or in another adult’s presence in your home. Among young widows, dark humor is more than allowed — it’s encouraged. Some days it’s all we’ve got. You will wear your spouse’s clothes to bed and still sleep on your side. Most likely, you will have a very hard time sleeping. Talking to birds, like Jen does in the third episode, will not seem so crazy.

People do some pretty bizarre things when they’re grieving, and that makes for some pretty crazy scenes like people singing “Carry On-oke” on a grief retreat, shopping in a party store for decorations for your dead husband’s birthday, or a realtor blaring heavy metal on the car stereo and screaming.

READ: Why I Told Anne Lamott My Husband Died

If you have young kids, you will keen into a pillow to muffle your cries.

Applegate’s portrayal of one of those moments while on the toilet, complete with wipe in between her sobs, is painfully realistic. You’ll be worried about your kids, but they’ll actually be more worried about you. Jen’s younger son, Henry, surprises her in the first episode when he says he’s not worried about something happening to her: “I just don’t want you to be alone.”

There will be the inevitable balloon release, even if it’s not really your thing.

There just aren’t that many rituals out there for grieving people. This ritual may end as it does for Jen, with Henry asking, “Is that it?” as their balloons sail away. In my case, my daughter’s balloon got stuck in a tree when she was aiming for heaven. Most widows with kids have a balloon story.

Your grief may feel like a puzzle you have to solve.

OK, maybe you’re not stopping at every car with a broken headlight and jotting down the license plate number, but you will work at it in your own way. Not getting to say goodbye to someone you love is very hard. It will leave you looking for some kind of “closure” (even if you hate that word) for a long time. You may feel guilty — things may be unresolved, but as Pastor Wayne tells Jen over whiskey and cigarettes, “You don’t know how your story was going to end. Someone just ripped those pages out of your book.”

There is a lot of wondering if we can ever really “know” another person.

This was a major theme in the first season. Did Jen really know her husband? Does she really know Judy? Her sons? Herself?

In the second episode, Jen drinks a sip of the water that had been in the glass her husband left in his music studio for maybe … months. For me, it was one of the most poignant moments in the entire first season. Standard widow behavior. A few months after he died, before I threw my late husband’s toothbrush out, I brushed with it. Real grief is runny mascara and ugly crying in cars, and if you’re not careful, the most alone you will ever feel in your life. But it is utterly human and a relief to see it on screen here, and hopefully, like all good art — that makes us feel a little less alone.

Julia Cho blogs at Studies in Hope. On her widely read blog, Dear Audrey, she chronicled her grief process after the sudden death of her husband. Her writing has been published in The New York Times, The Washington Post, and Scary Mommy among others.

Tags: Dead To Me, Husband Loss, Netflix, Spouse Loss, TV and Movies, Widow
Published on May 29, 2019