On a thoroughfare marked by personal tragedy, I find myself embracing possibility once again

I looked for you in the cemetery.

You had two addresses

On a metal door in the grass;

But you don’t live at either one.

What else awakes and knows

It was born, it will die.

The same clouds come and go,

The same bird sings or flies.

–from “Lament” by Burt Meyers Luisa Street in Santa Fe bisects a slim, corridor-like block lined with strip malls. There are hair salons, doctor’s offices, a clinic for cat care. The pediatrician I never liked has an office there. When I think about her, I feel a targeted, unreasonable anger. She didn’t do anything wrong, per se; she was simply the first doctor to tell me that my son, Ronan, at the time nine months old, merited a “further evaluation” after he failed his developmental tests. He could hardly lift his head. He didn’t pick up items with his chubby, sweaty hands. Something was wrong with him. The chairs and toys in the office were dusty; the paint on the walls was old. The nurses were cloying and ungracious.

Even before I knew Ronan was sick I missed the crisp, brisk, white-walled offices of the pediatrician out in Los Angeles,  where Ronan was born. I missed the young, vibrant doctor who wore Ugg boots and baggy designer sweaters and would say, after she examined Ronan, who seemed normal until he was three months of age, “now let’s go into my office and talk about how cute he is.” We did this, and it was wonderful.

I did everything I could to avoid going to that Santa Fe pediatrician’s office during Ronan’s illness, during the two-and-half years of his steady physical decline due to infantile Tay-Sachs disease, an incurable neurological disorder that when diagnosed in childhood is always fatal. He had seizures, went blind, became paralyzed and totally helpless, but he still needed vaccines that were dutifully marked in a book and recorded in his medical file that was soon transferred into the keeping of hospice care nurses. When I took him to the office, nearly two years old and still riding in his car seat like an infant, I sat as far away as possible from the other children Ronan’s age who were walking and talking. I turned away from the miracle of a child lifting a hand to his mouth while my child was dying. 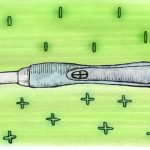 If you continue on Luisa Street you will reach Alta Vista. On one side of this street is the veterinary hospital where I take my dog for his shots and check-ups. He is old and anxious, with a bright white mark — like an errant brush stroke — on his black head. On the other side of the street is the crematorium where my son was cremated; next to this is the funeral home where his body lay for several days after his death. One of my hospice nurses asked for my permission (which I granted) to see Ronan in the funeral home, to place a wreath of baby roses around his head and to scatter the petals on his body, which was wrapped in a shroud I had my friend Tara embroider for him, his name loopy and lovely in shades of green and blue. I thought I would go see Ronan again, see the petals, but I was afraid to witness the next stage of disappearing. It was enough to remember how quickly his body went cold after his last breath.

On February 15 it will be one year since Ronan died in the early hours of a horribly cold morning. For at least five months after his death, every month I would jolt awake at 2:30 a.m. on the 15th. Part of me was looking for him — for his ghost, some sign of his presence, any proof of his existence in some unseen beyond. But the house was silent. There were no rattling windows, no slamming doors. I sat in the quiet dark of the house writing bad poetry.

In the weeks leading up to this one-year anniversary of Ronan’s death I find myself unaccountably sad and also filled with a happiness tinged with trepidation. I am having a baby girl in March, Ronan’s birth month, with the man I met and fell in love with during Ronan’s illness, during the dissolution of my marriage, during the hot summer and then the long winter leading up to Ronan’s death. I am happy in this new bright existence, and I also miss my boy so much I wish I could momentarily, every once in a while, just crawl out of the world.

My new pediatrician practices on Luisa Street. She is gentle, with shoulder-length white hair. She wears Danskos clogs or cowboy boots with jeans. I thought I would look for a pediatrician on a new street, a street without memories. But now I feel it is appropriate to enter this vortex of memory and hope and ongoing life, this charged triangle of doctor’s offices, the funeral home, the veterinary hospital. It is not a headstone or a memorial or a place where ashes were scattered, but part of me — and part of Ronan — lives in the middle of this street at a strange, undocumented emotional address to which no mail comes and that nobody apart from me will ever visit.

The baby kicks and somersaults; in one ultrasound photograph she stretches one small foot above her head. Her heartbeat is strong and steady. She has risen through the ranks of the vegetable/fruit comparison baby growth chart to be the size of a jicama, with toenails, fingernails and hair. She is alive while her brother is dead. What to do with this knowledge? Can you absorb it like a season? Feel the temperature of the air change against your skin? Learn to live with it?

Sunsets in the desert are still remarkable. Clouds continue forming interesting shapes against an impossibly blue sky. The world is unsafe but remains maddeningly beautiful here on Luisa Street, and elsewhere, everywhere.

Emily Rapp, a regular contributor to Role/Reboot, is the author of Poster Child: A Memoir (Bloomsbury USA, 2007) and The Still Point of the Turning World (Penguin Press, March 2013). She is a professor of creative writing and literature at the Santa Fe University of Art and Design in Santa Fe, New Mexico.