In an excerpt from the new Modern Loss book, Lucy Kalanithi, the widow of “When Breath Becomes Air” memoirist Paul Kalanithi, describes leaving her bridal gown behind — in the most unconventional of settings. 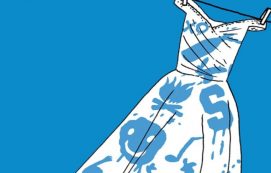 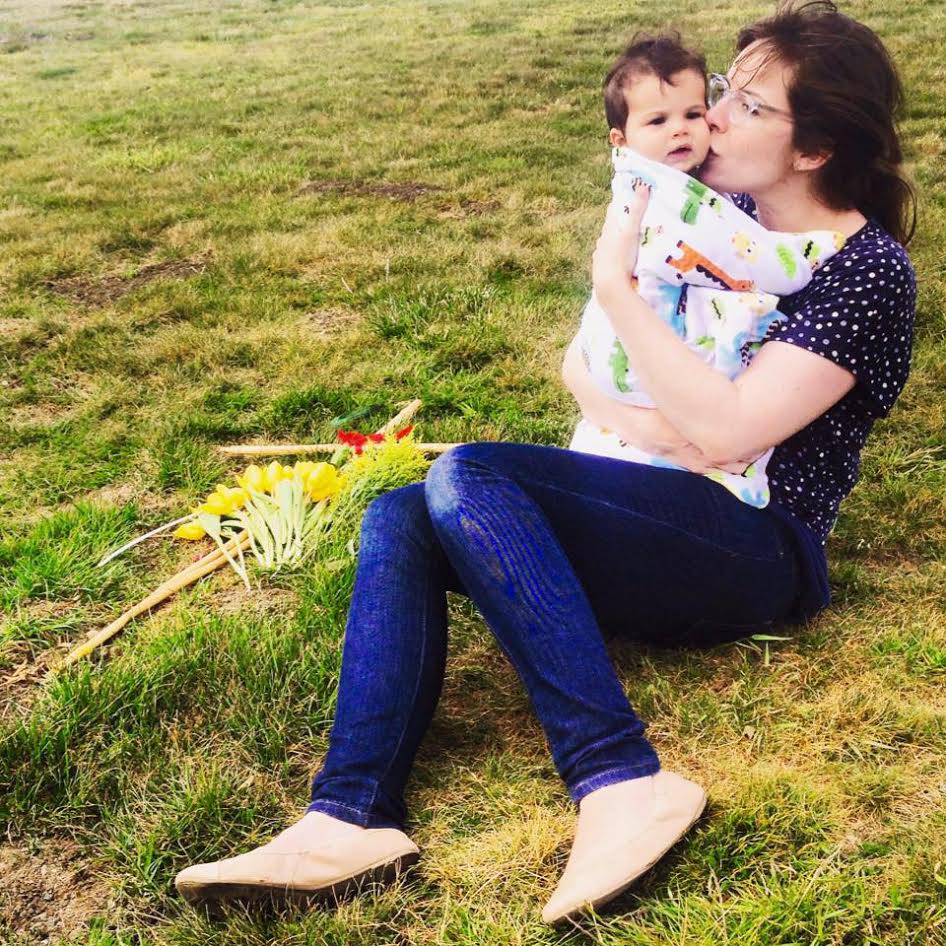 Lucy, with her and Paul’s daughter. (via PaulKalanithi.com)

No woman ever knows the actual fate of her wedding dress.

After the celebrations are over, she has it cleaned of all traces of revelry, pressed, and sealed. She rehangs it gently, perhaps picturing her future daughters, her own hands stroking the dress decades later, or the sexy cocktail getup it could be after hacking off a few feet of organza.

But I’d bet good money nobody imagines wearing her dress in tatters years down the line, while deep in the woods and 6,400 feet above sea level, and with a smile on her face.

Our future daughter, Paul’s and mine, was eight months old when we ordered home oxygen for her father, whose body was becoming steadily weaker, racked by the metastatic cancer that was running riot. I rolled the green gas tanks into our bedroom, where, bright as the day I’d worn it eight and a half years earlier, my wedding dress hung in our closet, sealed in a plastic bag for nearly that entire time. I’d worn a red sari for our marriage ceremony, but this—the simple long white dress I’d worn to our reception—was my wedding dress.

Paul loved that dress. Needing oxygen was not a good sign for Paul’s health, but it came with a tinge of hope. With that plastic tubing in his nose, Paul would be able to breathe more easily at high altitude. Eight weeks later we’d be at Stanford Sierra Camp, up in the mountains of California’s El Dorado National Forest.

Stanford Sierra Camp opens for three months every summer for Stanford alumni and their families, and Paul had worked two full summers there as an undergrad fifteen years prior. In the memoir he later wrote, Paul said that the camp “[concentrated] all the idylls of youth: beauty manifest in lakes, mountains, people; richness in experience, conversation, friendships . . . every day felt full of life.” The sixty-odd undergrads who staff the camp wear dozens of hats, cooking meals, acting as janitors, producing skits for the campers (and raunchy versions for themselves), guiding children on hikes, and entertaining the family campers. There are no closer friendships than those forged during the exhilarating and often debauched time staffers share. Every few years postgraduation, they’d reunite there, us included.

Though we knew Paul was dying, we still experienced joy together, and visiting Sierra Camp would certainly bring joy. Both of us were experienced backpackers—though he could no longer hike, we’d revel in the beautiful setting—and even the thought of taking oxygen tanks to altitude made the much-anticipated trip seem somehow more badass, an echo of our treks together over the years, when we’d stuff our hiking packs with xenon headlamps and butane stoves. We were a team then; we were a team still.

But Paul never made it to this reunion. He died, lying in bed next to me and surrounded by family, just a week after we brought the oxygen home. His family, friends—including dozens from his Sierra Camp days—and I were all heartbroken. In the weeks after Paul’s death we gathered together, cried, and reminisced. I buried his body, planned his memorial service, and held our daughter close. I also decided I would go to Sierra Camp as his widow—a word that still shocked me, but whose starkness reflected the pain I felt on losing Paul.

READ: We Had Fun Watching Our Wedding Video, Until We Realized That So Many Who Toasted Us That Day Are Gone

When the over-thirty set packs for these reunions, they bring their young children and their travel cribs, breast pumps, white noise machines, and other items not normally found in teenagers’ camp duffels. But they still pack their hiking boots, and they always bring “rally gear”: their college-dance-party clothes, a key ingredient of Sierra Camp parties. One girlfriend brought multicolored fluorescent cat-emblazoned leggings and a pink wig. Another dude brought a prom dress. Paul’s brother would be there, and for him I brought a vintage Stanford golf shirt, brightly striped tube socks, and a gorilla suit—all from Paul’s closet. For myself, not really knowing why, I packed my sleeping wedding dress.

Camaraderie, music, snowball fights, and reminiscing commenced. The first sunny morning up at camp saw our daughter’s first encounter with snow. As she squinted at its brightness, my eyes pricked with tears. I so crushingly loved her and so crushingly missed Paul. He’d adored this place, and he still felt so close it was as if he might have been hiding just behind any of these tall pines. It was almost too much to bear; but it was the only place on earth I wanted to be.

His friends felt the same: Paul was a neurosurgeon and a writer, but aside from his intellect, he was loved for his creativity and irreverence. In tribute to T. S. Eliot’s The Waste Land, he’d cowritten a comedy sketch called “The Slapstick Waste Land,” in which he and a counterpart performed sections of Eliot’s masterpiece, yelling “Stirring dull roots with spring rain!” while smashing each other in the face with cream pies and pratfalling on banana peels. It was here that he’d built that skit, while lounging on a wooden deck in front of Sierra Camp’s main lodge. On the final night of reunion weekends, the former staffers resurrect those talent-show skits—this reunion would be no exception—and they always close with another well-loved skit that mixes the solemn and the absurd.

In “Water Ballet,” eight toga-wearing people glide through a slow choreographed dance to the strains of Pachelbel’s Canon in D, their faces serene. They balance silver water jugs on their shoulders, and as the music elicits nostalgia from the audience, they begin to gracefully take sips and spit mouthfuls onto one another, the music and their solemn faces juxtaposing the inexplicability of their actions. It’s strangely stirring, surprisingly aesthetic, and pretty goddamn hilarious. They finish by tossing the remaining water directly onto the audience, signaling a night of dancing and celebration. Paul wore that toga many times.

READ: My Guide to Finding Love After Loss

I’d gone through the weekend with my wedding dress hanging unperturbed in my cabin’s closet—maybe it had been silly to bring it. But on the last day, I approached a friend with an epiphany: I needed to wear it during “Water Ballet.” Paul’s closest friends and brother would perform, and midway through, I’d make my way up to the stage carrying a cooler of King Cobra, a horrendous malt liquor Paul had loved. Instead of spewing water, they’d spit that. And instead of drenching the audience, they’d take aim at me. 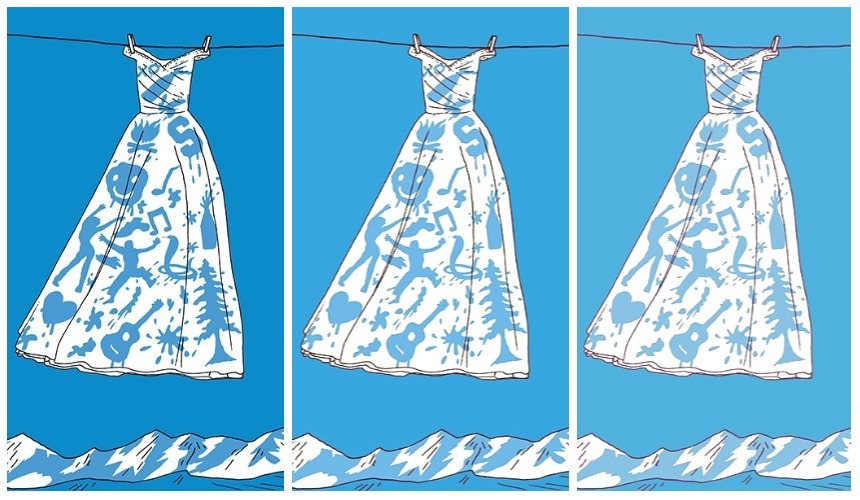 The skit commenced. Strains of violin filled the room. Midway through, I ascended the stage, solemnly passed out the beer, and stood still among the dancers. When I look back at a video someone was kind enough to shoot on a wobbling iPhone, I’m struck by my pose: arms out, palms up, as if I am open to whatever might come—a stance of radical acceptance. And that felt right: I was so utterly overwhelmed by sadness that my only power was to face it authentically, let it chill me, shock me, drip down my body just as the King Cobra did, and to stand up there in this singular and absurd skit, which somehow managed to honor Paul even more than his somber memorial service.

Realizing what I was wearing, the audience leaped to their feet, eyebrows raised, whooping. Some of them were Paul’s close friends, many of whom had attended our wedding, and others only knew Paul as a witty prankster thanks to Sierra Camp lore. We were all spontaneous participants in an intensely personal and communal ritual of remembrance—one of those preciously rare moments in which both absolutely nothing, and yet somehow everything, is sacred.

One of our best friends—a woman who’d been in Paul’s wedding party and who’d become one of my closest confidantes—glided toward me and stoically poured an entire can of King Cobra straight into my cleavage. I stayed still, shuddering, smiling, and crying. The room went wild. By the end of the skit, I was drenched, sticky, and sickly sweet-smelling like a college party dance floor. My dress, once pure white, was streaked with amber. The dance party began.

Fifteen years beforehand, Paul had come here as an academically serious yet wildly funny college student. Twelve years beforehand, we had met on the first day of medical school and quickly fallen in love. Ten years beforehand, he’d brought me to his beloved Sierra Camp for the first time; eight years beforehand we’d married on the shores of the Long Island Sound, and seven weeks beforehand he’d died in my arms in a hospital bed. All those moments somehow converged into one bracing jolt as a tipsy friend careened into me and coursed a frozen strawberry margarita down my back. Journey’s “Don’t Stop Believin’” thumped into the night. I stepped onto the dance floor.

The next morning, my head pounded after the late night. But my body was relaxed, my eyes just a little brighter. Friends offered to attempt to have the dress cleaned. But I knew no one would ever wear it again. It had served its final purpose: that King Cobra had rinsed my broken heart. Our daughter and I would move into a new future, ensconced by this community, and holding on to Paul in other ways while leaving this dress behind.

Lucy Kalanithi is an internist on faculty at the Stanford University School of Medicine and the widow of the late Paul Kalanithi, author of the memoir “When Breath Becomes Air,” for which she wrote the epilogue. Lucy completed her medical degree at Yale and postgraduate medical training at the University of California, San Francisco, and the Stanford Clinical Excellence Research Center. She lives in the San Francisco Bay Area with her daughter, Cady, and uses her dual United States-United Kingdom citizenship to justify her love of Scotch Eggs.