A Missing Gravestone in the ‘Garden of Fairies’

We went to the cemetery to visit dad — only to find out what wasn’t there. 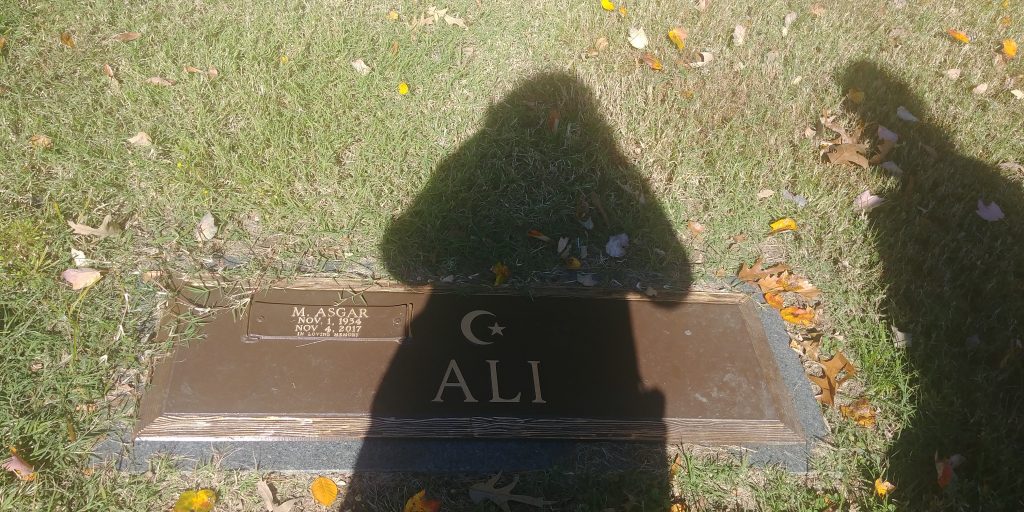 The author and her mom at the cemetery, after the headstone was placed. (Courtesy of Shirin Ali)

“Apparently, the dead know when you are going to visit them.” My mom said to me in a matter-of-fact way, as her hands wrapped the front pleats of her turquoise sari and the embroidered sash dangled from her left shoulder. I perched on her bed, in what was now her room, wearing my brother’s granite t-shirt and faded green and red striped flannel pajama bottoms.

She finished folding the sari and then stepped over to tug the window shade to her left. It snapped up. The sky had expelled its clouds for our Mother’s Day observance, my mom’s first visit to the cemetery to see my father’s grave.

“I hope I don’t cry,” she said. “I don’t want Dad to be sad.” I nodded, not really knowing how she was going to react during our visit, and feeling the weight of her loss, as usual. After all, she had been with my Dad when he went unresponsive in this room. Six months ago, she watched while the paramedics did 40 minutes of chest compressions, as he lay limp on the floor in his pajamas, pupils dilated, staring at the ceiling. She kept shaking and screaming that they were going to break his ribs.

READ: From Funeral Biscuits to Cemetery Picnics to Parsley Crowns, Here’s How the World Marks Death With Food.

While she put on her sunglasses and went back and forth between trying on a spring coat and a Kashmir shawl in front of the mirror, I selected two round stones from the front yard to place on the gravestone. She went out to the backyard and cut two short stems of his yellow roses, then wrapped them with a sopping paper towel and clutched them in her lap during the car ride as I drove.

After 15 minutes on the highway, we reached the front gate. I pointed out to her that the cemetery sign was in several languages, including “La Jardin de Fées.” The Garden of Fairies? Oddly cheerful. She breathed a sigh and said that the cemetery looked well maintained and clean. Bunches of plastic and real flowers dotted graves and small clusters of families were walking down the gravel paths or stopped at tombstones. I wondered when the twice-yearly sweep of the graves was when a caretaker would collect all the rocks, photographs, the polyester daises and mums in a bin.

As we walked through the grass, my mother said, “When we bought plots, Dr. Siddique and Dr. Muhammad also bought plots. I used to tease them that someday when your Dad I would lie here we would all have a big party.” It was a line I had heard before and while I chuckled, she was not smiling. We made our way past the Catholic part of the cemetery back to the Muslim burial section. I worried that we might run into other Muslims who would shake their heads at my legs, bared under my knee-length dress. I rolled my eyes at myself for caring.

By not coming to the cemetery after the funeral prayer at the masjid, my mother saved herself from witnessing the mishaps during the burial itself. She had asked a friend to drive my niece and herself to our house, while my brother rode with the coffin in the hearse and I carpooled with friends to the cemetery. The raindrops pelted us as we gathered by the graveside listening to the imam and prevented anyone from lingering with the rituals. A few people asked where my mom was.

READ: My Boyfriend’s Grave Is Littered With Cheap Tributes — But No Permanent Headstone. He Deserves Better.

It was only the men that handled the heavy white cardboard coffin carrying my father. Eco-friendly, it was meant to disintegrate quickly. Due to a dysfunction with the vault, my brother and his friends jumped into the grave and lowered my father down. Swollen from liters of IV fluids given in the ICU, his body was heavy and the men staggered under the weight several times. I hoped that he wouldn’t tumble out, shrouded in a white sheet, and crush anyone in the grave.

My mother and I meandered through the Muslim grave section, pausing to recite prayers at headstones of friends who had passed on. I jumped at seeing names of aunties and uncles who were alive and that had prematurely engraved their names along with their date of birth. Maybe it was cheaper to do it in advance? Or, perhaps they felt solace in marking their final resting place. All that ‘dust to dust’ business seems more real while gazing at your final destination.

‘I wondered when the twice-yearly sweep of the graves was when a caretaker would collect all the rocks, photographs, the polyester daises and mums in a bin.’

His grave was in a shady spot near a maple tree along the back edge of the cemetery. I took off my shoes as I approached it out of respect and grabbed my mother’s hand as she teetered along, bobbing up and down like a bright sailboat at low tide. When we went to put down the roses and stones, we realized that there was no gravestone. I couldn’t believe the site was blank half a year after his death.

With a grimace, I turned to her and asked, “Mom, Did you order the gravestone?” She replied that she likely did when she arranged the burial while I called the funeral home. My father’s furrowed eyebrows appeared on my face. A moment of clarity penetrated and she insisted, “Shirin, I know I paid for it! I remember telling the man what I wanted on the gravestone that day.”

I said, “But it’s not here and it’s been six months.” I groaned and brushed bits of leaves and maple pods off my skirt. If only I could have cut myself in two and been simultaneously on the phone with the funeral home from the ICU and also at “La Jardin de Fées” signing documents and writing checks with her. The wind rustled through the trees blowing the roses on the grave over. My mother took off her sunglasses and blotted tears with the end of her sari. She lamented, “Your brother just didn’t accept what was happening. I wish your Uncle Dalim had been with me. Male relatives handle these things.” Her close friend and my friend Dhammika had accompanied her instead.

I let the wind do the talking for me for a few moments and then suggested we finish our graveside visit and speak to a cemetery associate at the office. She and I held hands again and recited chapters from the Quran together. She wept and told my father that she was having a knee replacement surgery the following month, her first major medical procedure without him. My head throbbed and I leaked a few tears as I saw her speak to him, preparing for the weeks ahead. Had he had been alive, he would have monitored her, pored through medical articles on the Internet, and interrogated the surgeon after reading quietly for hours in the operative waiting room.

I drove us through to the administrative office, a one-story house with white siding, and parked in the lot. As we entered the building, I noticed the odor of a lavender Glade plug-in wafting through the hallway. Mauve carpet led up to the attendant at the counter in the back. My mother studied the striped wallpaper along with faded old photographs of the cemetery, certificates from various accrediting associations, and testimonial letters from grievers posted on the walls.

Seated behind the counter was an older Caucasian man, wearing a short-sleeved button-down white shirt and black slacks. A large desktop computer faced him as he was completing a Sudoku in black pen, leaning back in his chair. As we neared him, he straightened up and said, “Hi ladies, I am so sorry for your loss. How can I help you today?” He put on his eyeglasses.

My mom turned to me and raised her eyebrows. I explained the situation to the man, who nodded and scribbled in a spiral notebook with the logo of the cemetery. A storm surfaced on my mother’s face and she leaned forward on the counter, her head, forearms and elbows jutting towards the man and asserted, “It’s been six months! Why didn’t anyone call me to double-check?”

The man moved the Sudoku book to the side, rustled several stacks of papers on his desk, repositioned the mouse and said, “I am so very sorry Ma’am. I am embarrassed that this has happened. Let me check on it now.” After searching for the status of the grave on the computer, he confirmed that the gravestone had not been ordered, though my mother had indeed specified what she wanted on it. He apologized several times and told us that he would leave a message for our burial planner and ask him to call my mother on Monday morning.

The tangle of knots in my chest relaxed a little as a slow breath left my lips. I pushed my chin forward, right hand resting on my hip and asked, “Can it be done by Father’s Day?” My mother’s head moved up and down in agreement next to me. As I gazed at the man, I saw the two of us reflected in his lenses, side-by-side. He said, “Yes, I am certain we can do that.”

My mom put her warm palm on my shoulder as we headed out towards the car on the uneven pavement. To our left, we looked out over the cemetery and saw a line of cars, headlights on, driving in on the road past the gate.

Shirin Ali is a psychiatrist and psychoanalyst in Greenwich Village and spends much of her time listening to other people’s stories while trying to understand her own.