What if we try caring for our pain, instead of trying to control it? 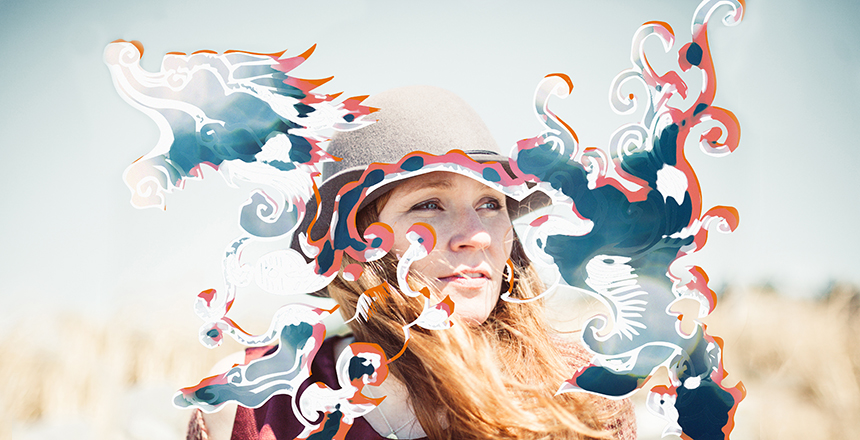 The resident had listened intently to my belly with a stethoscope, declaring one baby dead and the other near-dead, and the room had exploded. I remember her face going white. I remember doctors sprinting me down the hall on a gurney as they shouted ahead for the crash cart, wheels wobbling, fluorescent lights turning over in front of my face like a car speeding through a tunnel at night.

I remember thinking, They are dying and so am I. Not like a decision, and not like fear, oddly. But there was a moment in the middle of it all, just before they put the mask over my face and everything went dark, where I said a forever-goodbye to myself. A degree of peril will do that to you. No matter what the outcome, your self—as you’ve always known it—is about to be, or has been, demolished. There’s a split-second when you know it, and you say goodbye.

(It’s funny, and oh-so-human, that it took being on that gurney for me to realize how fortunate and uneventful my life had been to that moment.)

I opened different eyes, in different skin. Bones, sinew, deep muscle and every capillary transplanted, somehow. Body-snatched. Nothing was familiar. Everything was upside-down. My babies were out and in peril. I was empty. It was three months too soon. (My hands are small. The thighs of my infant sons were a thumb-and-a-half thick. Look at your thumb.)

Heart surgery, brain surgery, the bleary-eyed in-between. Two months later we walked out into spring air and fresh-cut grass, blinking in the sun. I was a regular mother to one toddler who did a lot of lovely shouting about little trains, and to one premature but stable infant weighed by the gram. And I was a bereaved mother to one more premature infant, forever six weeks old, who was dead.

Something new stretched inside me, uncomfortably, an occupying force. Chest cavity, seat of spine, temples, fingertips, throat. Where am I, it wailed, tangled up in my guts. I swear, I felt it as we walked through the exit to the hospital parkade.

The new thing was pain, and we were antagonists. There was not to be enough space or peace for either of us.

It’s a tough and lonely labour, but our decent—and even joy-filled!—future hinges on this to-do list:

Seems simple? Don’t kid yourself. It’s a nearly-impossible list. A lifelong practice. And it can’t even begin until you’ve done the most immediate triage: that wailing thing inside you. It doesn’t want to be there. You don’t want it there. What a miserable pairing!

It’s as true for individual pain as it is for the social and political machinations of the world: as our ideals and assumptions and realities die, shift, and alter irrevocably, we panic. It hurts, and brutally. We need to treat that pain with respect, contemplating the nature of its heat, and re-learn how to love and care for the world all over again.

Pain is an antagonist. Aggression won’t budge it, and ignoring it is hopeless. No rug is big enough to contain this cheat-sweep. There is only one remaining course of action. You know. All the sci-fi movies where they’re up against the wall and someone says Wait. What if we’ve got this all wrong? It’s the last-ditch rally that may as well be our first step: figuring over fighting. Classify this organism’s genus in a way that’s not about reactionism, panic, or anger, but study. Might we subdue or even neutralize this threat by domesticating it?

Imagine your pain as a creature unto itself. It is foreign and chafing, breathing fire while experiencing its own claustrophobia in the very squashed, non-pliable quarters of your body.

Imagine your pain as a creature unto itself. It is foreign and chafing, breathing fire while experiencing its own claustrophobia in the very squashed, non-pliable quarters of your body. You think you’ve got it bad, but your loss—this monstrous thing!—can only be contained by the body in which it has landed. More forced occupation than occupying force. The body actively hates it, wishing it gone.

But know this: setting ourselves against pain turns that pain into a festering malignancy that wreaks havoc and ill-will throughout our lives, manifesting over and over again in garbage decisions, doomed relationships, PTSD, and a tragically inauthentic, unending replay of the fight-or-flight instinct. French philosopher, mystic, and political activist Simone Weil wrote to her mathematician brother André in 1940: “In struggling against anguish one never produces serenity; the struggle against anguish only produces new forms of anguish.”

This is how: first, notice it. Catalogue it like the natural phenomenon it is. Be curious about it. This is why: if you don’t get to know each other, neither of you will be able to settle. It is scraping and screaming and clamoring for space inside you. Let it have some.

“Be strong!” says the ‘buck-up’ barbershop chorus. We’ve all got one. “Show us courage! Show us gratitude!”

Translated: Present well, or we’ll say you’ve cracked-up. When we ask how you’re doing, say you’re fine, or better yet—you’re soldiering on, carrying on, moving on, getting over it. Don’t make us uncomfortable. Looking fine is more important than being fine. Don’t make us whisper about how you’re Not Coping, which is code for cracked-up. You don’t want us to think you’re cracked-up, right?

They’d look at me, faux-concerned, objecting. And I’d look at them, feeling something I was surprised to like: the wailing monstrous thing, breathing fire, screaming now not at me but for me, at them. I rarely opened my mouth to let it out. But hot damn, I heard the scream, and knew it was for me: the Fuck You of my dragon.

My dragon! Fortitude. A cousin to the vigor my surviving son had, and that my dead son did not. Ben thrashed and mewed the tiniest mad-cry in his incubator. Don’t be upset he’s upset, the nurses would say. This is good! He’s not supposed to be content in a plastic box.

What a joy, to be well enough to be pissed off! Fire in the belly.

By putting all our energy into pretending we’re unaffected by the worst, we block ourselves from the best. So let’s quit pretending.

By putting all our energy into pretending we’re unaffected by the worst, we block ourselves from the best. So let’s quit pretending. Let’s face the pain encamped in all of us and ask what it needs without flinching.

This is animal husbandry for dragons.

A handwritten poem hangs on the wall underneath a tin ceiling at my favourite bakery, advice for seaside farmers. ‘I AM YOUR COW,’ it reads. ‘I need to eat what you give me, drink when you let me, live where you put me. I may be comfortable—a high producer—healthy—or, I may not—so much depends on you. How will you feed me? How will you water me? In what kind of place will you keep me? I hope it is a clean place—dry, comfortable, not too cold, not too warm, with air always fresh and good to breathe. If it is—then we shall both be glad that I AM YOUR COW.’

Your dragon is providing a particular heat you need right now, a natural heat, and you will need it and note it intermittently for the rest of your life. Like the nourishment of milk. A lot, early on, for strong bones as you grow. As you age out of the thickest grief, only a drizzle now and then in your tea. You’ll always need and note a little, given what you’ve been through. And so: look to the farmers.

But what does ‘face the pain’ mean? I don’t speak dragon.

It’s maddening, I know. Everything people say about grief is both untrue and completely true at the same time. Grief has to run its course, but it’s not linear. There is no course. You’re never ‘through’ grief, but there is another side to it. One contradiction after another! What are we supposed to do with that? Nothing. Not really. All I know is to resort to the basics.

Let time do its work. Give your new self the basic care of sleep and water and nourishment. Be exactly what you are, where you are. There’s nothing you can do to hurry things along, and there’s no such thing as ‘healed’. There is only trying again tomorrow. It’s what my mom would say. Have a hot bath, and try again tomorrow.

One day, several years after Liam died, a friend with her hands full said Hang on a minute… can you take him? I’ll be right back and plopped her baby into my arms, leaving me there. Gah. Crap. I’d made a habit of being scarce to babies, or making them scarce to me. I didn’t mind them from a distance, but up-close, they were too much. After a pause I swung him around to face front, one hand crossing his chest and to scoop a fat thigh, leaving one leg dangling, as I used to carry my own. We found a mirror, as you do sometimes.

A string of drool slid across my knuckles. He gurgled, eyes wide, and I realized I’d been holding my breath. Waiting for something: a flash of revulsion at my body’s failure; a shadow of envy that here was a baby who had arrived as expected, his mother never having had to see him pinned to machines like a butterfly to a board. Something. The heat. Something I’d have to beg to step down, or at least restrain, or shush.

I waited, like the pause when you listen for a sound you thought you might have heard. Nothing. We went outside to sit in the grass with bare feet, and the top of his head smelled nice, and on went the day.

(A dragon snoozes. It breathes softly, slowly, curled up like a cat.)

In grief, we are profoundly and indelibly changed. But the new self that grows in the steaming, freshly-rotted remnants of the demolished self will be something you’ll be proud of, dragon and all. I know I am.

When Kate Inglis’s twin boys were born prematurely, one survived and the other did not. Her book—Notes for the Everlost: A Field Guide To Grief—is part memoir and part handbook for the heartbroken, a powerful, unsparing account for all who have been bereaved and are grieving, offering a beacon as we practice integrating loss into life. Listen to Kate on The Good Life podcast.