Modern Loss speaks with the Facebook COO about micro-stepping her way through grief, ‘Option B,’ and how she approaches those painful trigger holidays. 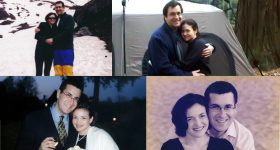 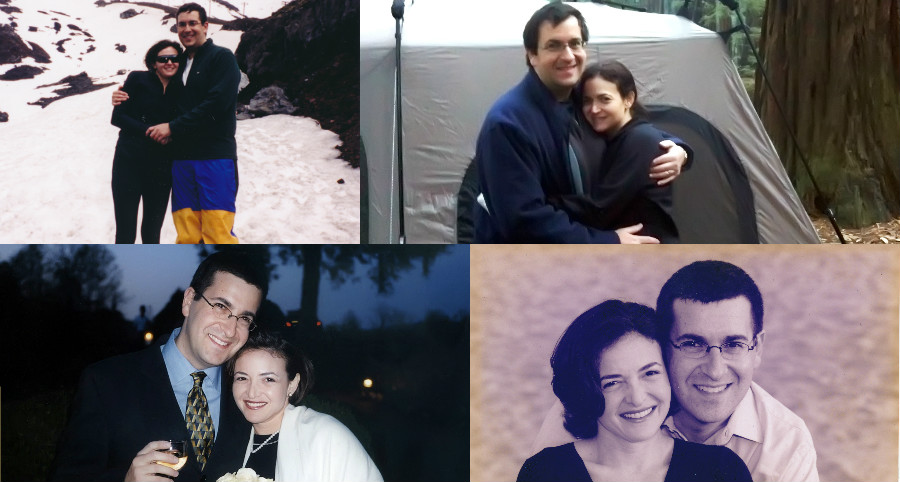 By now, the story is modern-day tragic lore: In May 2015, Facebook COO Sheryl Sandberg and her husband, SurveyMonkey CEO Dave Goldberg, headed to Mexico on vacation. While there, Dave died from cardiac arrhythmia. Suddenly, Sandberg, the New York Times bestselling author of Lean In, her women-in-the-workplace manifesto, and who once proclaimed, “The most important career choice you’ll make is who you marry,” found herself a widow, single parent, and sole household breadwinner (admittedly, at the highest level).

The Internet cuts both ways when it comes to truly supporting others. But through her heartbreakingly candid Facebook posts – and the thousands upon thousands of wall comments they inspired, not to mention private conversations – Sandberg helped to show the positive side of social media and how it can comfort those dealing with grief.

Exactly two years after Goldberg’s death, she and her friend Adam Grant have co-authored Option B. The book not only shares Sandberg’s story of moving through those initial years of unimaginable loss but also those of other people who’ve faced a wide range of hardships and managed to not only survive, but thrive. It also offers prescriptive advice to readers on how to build and maintain their own resilience.

I had a conversation with Sandberg about the importance of community, the baby steps she takes to stay afloat most days, and what companies should realize about supporting employees moving through grief.

Rebecca Soffer: At Modern Loss, our contributors share their stories partly as a way to take charge of their own narrative instead of having someone write it for them. Kind of avoiding the whole, “There goes Sue. Her mom died. Poor her,” label. Do you feel you’ve done the same for yourself with “Option B”?

Sheryl Sandberg: Yes. I mean there are these labels we don’t like. I have a really, really, really hard time with the word widow. I don’t want to be a widow, you know? And I think even using that word to describe myself is something that was really hard for me to do and didn’t come naturally at all. We have to accept those things, but also sometimes be in communities. And I think that’s why Modern Loss is important.

RS: How did you ground yourself in those early days of your loss, in what was surely a very darkly surreal time? When each of my parents died I remember having these out-of-body type feelings and had to work really hard to anchor myself onto some immediate, very small task that would take place, say, in the next hour.

“I don’t want to be a widow…using that word to describe myself…didn’t come naturally at all.”

SS: Yeah. Definitely, minute by minute, because it does feel like the minutes are hours, right? And hours are weeks. It really is a crazy thing to experience. And so I had to really just put literally one foot in front of the other. I thought it was unbearable. And someone had to point out, “Actually that’s pretty good that you could do that.” That helped me a lot.

RS: Here at Modern Loss, we’ve been trying to open up the conversation around grief and resilience over the long arc of loss for nearly four years. I think the reason we’re still going strong is because this topic has endless permutations and combinations. And one of those is people feeling nervous admitting how deeply their grief affects them as compared to somebody else’s. Like, “This was the worst thing that’s ever happened to me. Oh, my God, I can’t believe I said that. It’s nowhere near what you went through!” 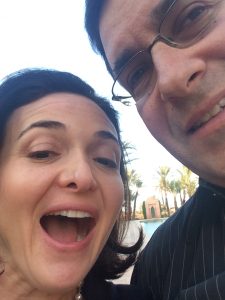 A couple’s selfie in happier times

SS: Yes. One day I had a friend who was super upset and I said, “Well, what’s going on?” She was like, “Well…” and she had an argument with her husband, but she quickly said, “But I can’t complain to you. Compared to what you’ve gone through. It’s [not] worse.” And I said, “Listen. If none of my friends can complain to me about their husbands, I’m not gonna have any friends. Like please, you can complain to me.” I think letting people treat you normally again is hugely important.

RS: And what about other people who’ve had an actual loss stemming from a death who say, “Oh, Sheryl, I’m sorry. I didn’t lose my husband,” when it was, say, a friend or an aunt.

SS: All the time people say, “Well it’s not as bad as what you’ve gone through.” And I always say, “Loss is loss.” And it’s not a question of comparative loss. It’s a question of everyone’s individual and common experience of what is grief.

“Loss is loss. And it’s not a question of comparative loss. It’s a question of everyone’s individual and common experience of what is grief.”

RS: Yeah, the whole comparing loss levels is a weird, dangerous game that doesn’t have a really good ending.

RS: Like the rest of country, our readers are aware Mother’s Day is around the corner. But in some of their cases, they’re painfully aware.

SS: It’s so hard for people. Something that never occurred to me was that Mother’s Day or Father’s Day was such a hard holiday. Father’s Day I’m already concerned about. Mother’s Day for me is not as hard. My kids have a mother. I’m very cognizant of how hard it is for others.

But for Father’s Day, my kids just don’t have a father. That’s incredibly hard. I don’t even want to be with other family because I don’t want to ruin my nieces’ and nephews’ Father’s Day by us being around. And so the three of us have kind of gone off. Last year we went to a camp for children whose parents were incarcerated [Project Avary], which is another way of losing a parent, often a father.

RS: The trigger holidays are tough. Any specific plans for this year?

SS: We’re still thinking about it.

“Father’s Day I’m already concerned about…I don’t even want to be with other family because I don’t want to ruin my nieces’ and nephews’ Father’s Day by us being around.”

RS: So, obviously, you’re known for Lean In, which is all about women in the workplace. Speaking of which, you just made some major changes in Facebook’s bereavement policy, including up to 20 paid days for an immediate family member [and 10 for an extended family member].

I think our readers read that news and were like, finally. We’ve been so eager to see companies embrace policies like this. 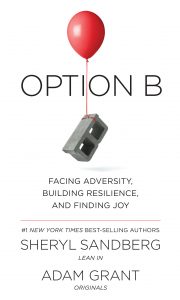 When my mom died I was working in daily TV and had no benefits. I could only take time off because I just happened to work for amazing people who encouraged me to do what I had to do. What do you wish employers would realize about the short- and long-term benefits of providing a solid block of paid leave time?

SS: That it’s both in their interest and the employee’s interest. That if we treat our employees well, they treat us well. It is super important to get this right, and almost no companies do.

I think most Americans get nothing or they get three days, and not everyone gets it paid. There’s no timeline [on grief]. There really isn’t. I think some of other things we do [at Facebook] are equally important. If someone’s working here and they die, we take care of the families both in terms of financial assistance and logistical assistance. If somebody’s working here and someone dies, we help them with everything from finding counselors to the logistics. I think we need very broad assistance, both the financial kind and the policy kind but also the personal kind. The kind where we say to people, “I know you’re grieving and I’m here for you, and we can talk about it even though it’s working hours because grief does not turn off like a spigot.” We can’t just turn it off when we walk in the morning and turn it back on.

RS: True. I have tried and I failed every time.

Is there a particular song or other piece of art or literature that’s helped you a lot since Dave’s death? Something you keep coming back to?

RS: I once read about this storefront in Japan — I have no actual proof that it exists — where you just go in and throw plates against the wall. And to me that honestly sounds amazing. Like, I want this store on my street.

RS: Do you ever have days when all you want to do is smash plates or be sad, or are you always really able to bring yourself back to that moment?

SS: No, no, no, no. No. I mean the predictable day was the two year anniversary of his death, and it was horrific. Horrible, horrible day. Sometimes for no reason at all I think about what I lost, and it is still so hard. It’s there with me always. And so I have lots of days I would like to go to the place in Japan and throw the things on the wall, but I also am really trying to find the joy, find the gratitude, find the things that can help me get through it. Not all the time, but sometimes.

You can purchase Option B here. Conversation has been edited for length and clarity.