Not So ‘Crazy,’ After All

How my sister’s cancer death changed the way I approach my own health care choices. 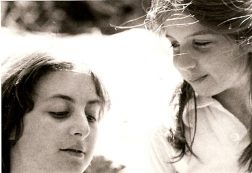 Janet, right, with her sister Deborah

Years ago, a story went around about a young woman we all knew. Turns out, the gossip went, her sister turned up with the same cancer their mother died from, and so she had an elective double mastectomy and a radical hysterectomy. Isn’t that crazy?!

I can’t flash forward 20 years, because those years have so much life and death in them that I tend to run the tape more slowly. But if I narrow the focus just to the cancer part, just the family part, I can summarize it in one grim sentence: My father survived three cancers, my middle sister survived two and my oldest sister did not survive the one that came for her.

Cancer has taken days and months and years of my life and given them over to worrying and tending.  It has permanently altered every single member of my family, whether afflicted or bystander. Cancer, the greedy bastard, took my sister, plucked her right out of the middle of her life and left a gap that cannot close for the people who remain: her son, our parents, my sister and me, left trying to balance a three-legged stool on two wobbly legs.

During the transition from one sister beating her second cancer to the other sister dying of her first, I had my annual mammogram. Nature saw fit to equip me with breasts that are both very tender and dense enough that they must be squished especially hard to show anything onscreen. During a mammogram (in case you have not had the pleasure) you stand up, with your breast clamped between two plates. Sometimes I wonder what would happen to the patient, and her breast, if she were to faint during the procedure. I do not think the machine would let go.

I endured the chilly room (do cold breasts give up their data more readily?), the flattening (surely a penigram would be orchestrated differently?), and the armpit-digging (can a woman have been involved at any point in the design of this contraption?) of the machine’s corners. I waited the requisite ‘few minutes’ while the films were reviewed, carefully restricting my thoughts to moving on to my next errand. Grocery store, bank deposit, mammogram, teacher conference. Check, check, check.

But when the nurse came back a half hour later, she said I’d need an ultrasound. They wanted to collect more information about something they had seen and not liked. I sat another 40 minutes waiting for that, trying harder (and less successfully) to keep my mind on learning I was fine.. Reminding myself that this was nothing, mere inconvenience, had a dizzying effect; sixth sense or Queen of Denial? Didn’t my sisters tell themselves that in the waiting room?

An ultrasound is a walk in the park compared to a mammogram. I lay down, warm goop was spread on the area in question, and I fixed my eyes on the ceiling tile. The “technologist” was as quiet as a gargoyle (and just as reassuring) as she probed and clicked, zeroing in on something even I began to be able to discern on the murky screen as the gel cooled on my body.

The radiologist appeared a century or two later. “What we’re seeing is probably a cyst, maybe a fibroadenoma,” she said briskly. “So probably nothing to really be concerned about. But you seem really tense. I know I’m not worried, but we can do a needle biopsy if you want.”

Could I have been the first stressed out female human Dr. Ice Queen had encountered during a Breast Exam of Suspicious Findings? Had she seen my chart, with its family history right up at the top? My sister!  Stage IV, lady—is it OK to be tense about that? I was no stranger to staying level-headed in frightening medical conversations, but I was used to listening on behalf of someone who was not me, while sitting upright in a chair.

“I don’t want a needle biopsy to make me feel better,” I said, trying to sound as competent as a lying-down, terrified, half-naked person with blue hair gel on their tits can sound. “I want one if it’s indicated.”

We came to agreement that two years of more frequent monitoring was a cautious-enough approach to satisfy both of us.

So at regular intervals while one sister recovered and the other one didn’t, I would haul myself out of their stories and into my own. I really didn’t think much about it in between; the immediacy of caretaking demands didn’t leave much opportunity to wonder how fate planned to deal my own cards. The hours spent in a cold room in a pink half-johnny gave me nothing but time to consider the implications of cancer coming for me, too, but I refused to go there. Car inspection, dentist appointment, mammogram, check.

Not long after my sister died, I went in for what was either going to be the last of the every-six-months look-see appointments or the start of some fresh hell.  Still ragged with battle fatigue and grief from the agonizing two years of seeing cancer erode and erase my beautiful sister, I just yanked the leash when my brain began to pull towards probabilities. I tried not to connect this waiting room to any of the dozens I had sat in with my sister as the news grew grimmer.

After a couple cycles of mashing and sitting around they told me again that nothing had changed and I could go back to annual screening intervals. My husband said he was sorry that getting good news had to be so painful and time-consuming.

I had complained about all of that. But I realized then I would stand for hours with my breasts in a vise to hear someone tell me I don’t, at the moment anyway, have cancer, as near as they can tell. Provided they sound the all-clear, the smashing and the shivering, the goopiness and poking, the bad attitudes and tedious time are nothing at all compared to the worrying in the dark of night, worry that is compounded by every new study linking stress to cancer.

I would like to find that woman I gossiped about 20 years ago — isn’t that crazy, what she did? — and take her out for a nice lunch. Now that not having cancer does not run in my family, either, I can recognize the preemptive impulse: Take it all. Please. Take all the parts away that could bring me, and those who love me, to this same sorrow.

I’ve also learned quite a lot about what she elected to endure. I have seen what recovery from those surgeries looks like, and come to understand that she stared down an induced sudden menopause in her early thirties, and said, “Bring it on.”

I can’t say I am made of the same stuff. But it doesn’t look so absurd to me anymore. It looks like one of the many corners cancer forces a family into, where people find out what they are capable of, and just how far they will go to stay right here.

Janet Reich Elsbach lives in the Berkshire hills of Western Massachusetts with her husband and three children.  See more of her writing at A Raisin & A Porpoise.