Take a Chance On Me

Two days after my mom’s funeral, her friend Velma told me she had a surprise for me — and OMG, did she ever.

By Sativa Peterson and Rebecca Soffer 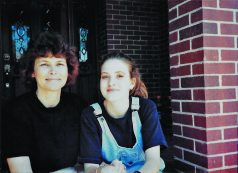 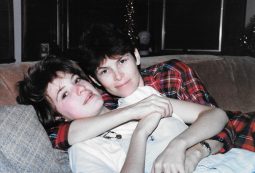 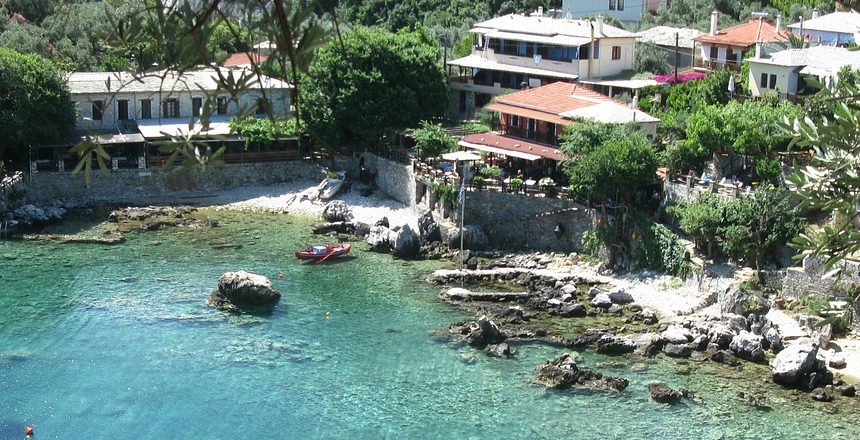 My mom passed away in the middle of the night. It was late July and the sky was filled with stars. I tried to press them into memory.

By 11 the next morning I was watching my 4-year-old daughter at swimming lessons at the city pool. I’d decided to stick to routine. My mom’s sister and my mom’s best friend sat on either side of me. I’d been living with my parents for two months, in Winslow, Arizona, during the final stages of my mom’s illness. I mentioned how badly I needed a haircut and the next thing I knew the two ladies were on the phone making an appointment, happy to be able to do something, anything, to help out. That was how I came to have my hair cut on the day my mom died. My mom’s friend Ann has big, teased, puffy hair, so too does my mom’s sister, my Aunt Jan. So naturally, I was afraid that I was going to walk out of the beauty salon with Winslow hair but I didn’t have the energy to protest.

I had other things to worry about — picking out an outfit for my mom to wear. She liked Fall colors, oranges and yellows, and hated being cold. I needed to remember to make sure the tags were removed from the neckline of her clothing. Tags were a pet peeve of my mom. A scratchy tag touching the back of her neck for eternity would have horrified her. This task was do-able, but planning my mom’s funeral services felt more taxing. The next few days were a blur.

Finally, the morning after my mom’s funeral my dad and I helped pack my brother into his car and said goodbye. Liam, my husband, had left the night before, hours after the funeral, to catch a flight. We let out a sigh. For the first time in days we were down to three — just my dad, my small daughter, and me. We weren’t sure what we were supposed to do with ourselves. We were sitting on the front porch lingering over a last cup of coffee when a neighbor, Velma, came walking up with a potted rose bush under her arm. She wanted us all to plant this “Judie” rose bush in the backyard together. Judie was my mom’s name.

Velma was a relatively new friend of my mother’s. We felt so raw and caught off-guard, and this was obviously a participatory activity, so we reluctantly started walking around the backyard looking for a spot. Did we really have to plant a rose bush? Now? I thought. 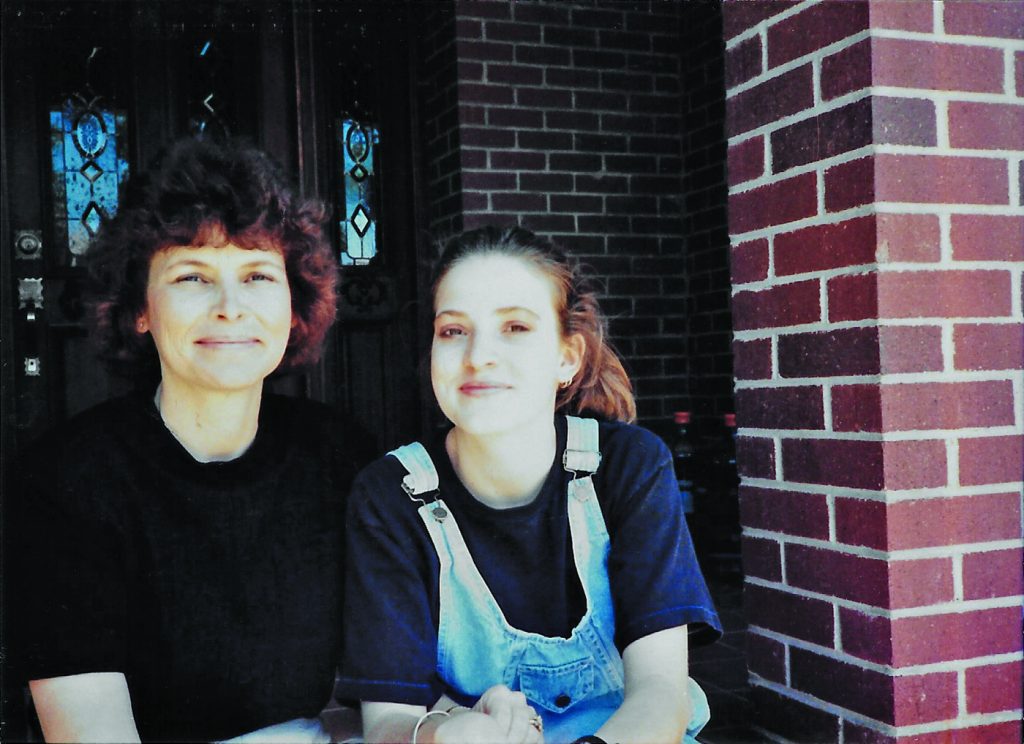 The author and her mother (Courtesy of Sativa Peterson)

So, we walked just behind the swing set, whose purchase my mother had insisted upon earlier in the summer, and we began digging a hole in the soil. My father’s shovel piercing through the manicured lawn. To dig in the earth that closely to my mom’s funeral made me feel distraught; it was difficult to keep my myself focused and not reeling outside of acceptable human behavior like wailing or babbling incoherently. Once we had created a hole big enough and deep enough, Velma cracked open the plastic bucket housing the rosebush and placed it into the ground. Its petals were pink and soft and, knowing my pitiful record for keeping plants alive, I thought, Oh, dear god, don’t let this die too, as my dad pushed dirt back around the plant.

Before Velma left she said she had a surprise for me, and could she “borrow” me for a few hours tomorrow? What? I thought. This was awkward. I felt prickly. I didn’t want any surprises. I just lost my mother, wasn’t that surprise enough? I did not want to leave the cocoon of my mother’s house with anyone but my closest family. But I didn’t want to offend Velma, and she had piqued my curiosity. Was she going to tell me something about my mom? “Ok, sure.” I said hesitantly. “As long as my dad is willing to watch my kid.” It was settled. She would pick me up at 9:15 the next morning.

“What is that all about?” I said to my dad after she left. He and I agreed it was pretty strange. What could it be? She played Bridge with my mom, was she going to give me my mom’s nickels and quarter winnings back?

The next morning, I was showered and dressed and sitting on the front porch when Velma pulled up. “Are you ready?” she asked cheerfully. I cast a face at my dad as if to say wish me luck. Velma drove through town, then on to the freeway ramp, and then out into the empty expanse of desert leaving Winslow toward Leupp, Two Guns, Twin Arrows and beyond. We were traveling some distance. We must be going to Flagstaff, I thought, relaxing a little. Oh, she’s probably taking me to breakfast. We talked the whole way. The landscape flashing by. Velma spoke about her daughter, who was close to my age, and her husband’s death a couple of years earlier. She talked about how my mom had welcomed her to town, into their card group. 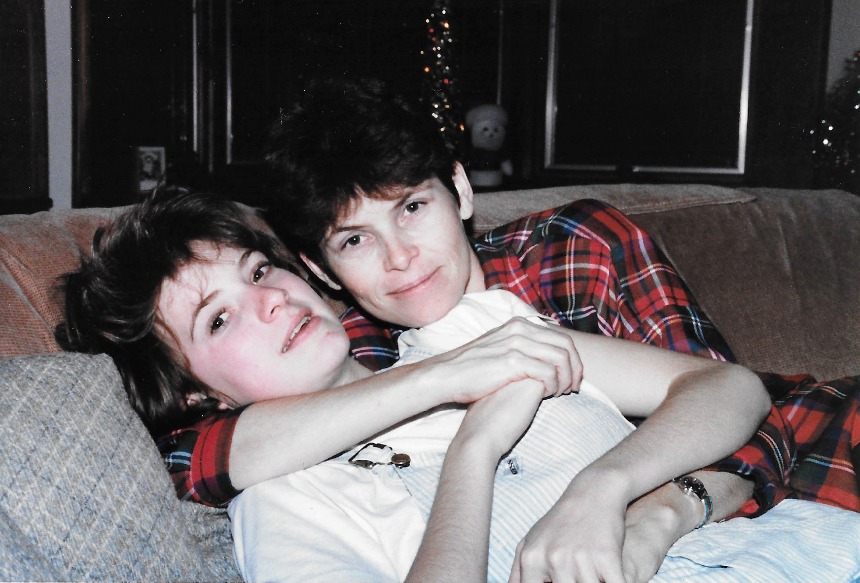 The author and her mother (Courtesy of Sativa Peterson)

Finally, we pulled into a parking lot and Velma turned to me and said, “Are you ready for your surprise?” We got out of the car and I followed her. She walked toward a movie theater box-office where she asked for two tickets to “Mamma Mia!” Yes, “Mamma Mia!” filled with catchy ABBA songs and sing-along cheerfulness. Yes, “Mamma Mia!” at 10:30 in the morning with my freshly cut Winslow hair. I was speechless. Even after the lights went down and no one could see my stupid, dumbfounded face, thinking Ho-ly Shit! She’s taken me to see “Mamma Mia!” Desperately wanting to make a run for it, to hide in the bathroom and call someone, anyone, to tell them what was happening. Wanting someone to acknowledge the absurdity of the moment. I buried my mother two days ago, and I have been taken hostage to see Mamma fuckin’ Mia!

It was a truly mystifying social gesture. Of course, the person I most wanted to tell was my mom. She would have loved it. Even so, what could I do? I couldn’t run away. I was 50 miles from home, and crying to Velma would be pointless. So, I gave up, gave in, and let the movie roll over me. Let a smile creep in at the corners of my mouth. Let the sparkling Greek waters, and Meryl Streep singing in overalls move me, briefly, away from my loss, the gesture as weird, and warm, as Winslow itself.

Sativa Peterson is a newspaper librarian at the State of Arizona Research Library in Phoenix, Arizona. She loves old news. She’s also a freelance writer whose work has appeared in the Phoenix New Times, xoJane, BUST and other publications.