In 2015, These Events Changed How We Talk About Grief

From #JeSuisCharlie and #BlackLivesMatter to Sheryl Sandberg’s meditation on loss, the past year has transformed the conversation around death and dying. 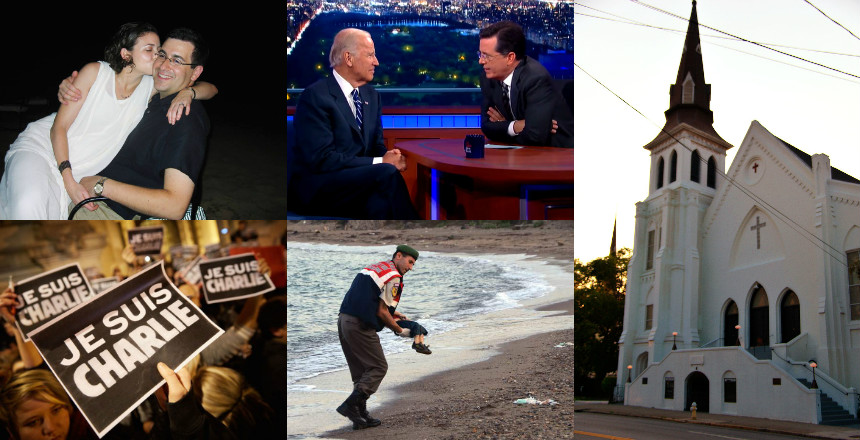 We’ve been grieving as long as we’ve been living, so in some ways there’s nothing new under the sun. But the events of the past year have helped shape — and shift — the conversation about death, and about those living with loss. Here how:

#JeSuisCharlie, and What Came Next

The terror wave that rocked Paris in January included an attack on a satirical newspaper and a kosher supermarket. All told: 17 people were killed. Their deaths set off a collective grief that spanned the globe — and #JeSuisCharlie (I Am Charlie) and #JeSuisJuif (I Am Jewish) became rallying cries on and off Twitter. A few days later, an estimated one million people, including some 60 world leaders, marched on the French capital to show their solidarity with the victimized city. When the city was again targeted 10 months later — in a series of coordinated attacks that killed 130 people — Facebook turned on its “Safety Check,” allowing Parisians to let others know that they were safe. And the social network also made it easy for users to filter their profile pictures through the colors of a French flag. (These features were not without controversy, given that no such options weren’t offered when terrorists attacked Beirut a day before the Paris rampage, or Bamako, Mali a week later.)

Her breast cancer diagnosis at age 37 did not, in her own words, come “tied with a pink ribbon.” Which was precisely Lisa Boncheck Adams’ appeal to the thousands who followed her journey on Twitter and on her personal blog. The mother of three wrote with sincerity — minus the saccharine — about the indignities of her illness, and about living in the shadow of dying. (Aren’t we all?) And in doing so, “she taught us how to die,” as The New York Times Magazine put it. “Spring is 43 days away,” she tweeted in February to her 15,000-plus followers. She wouldn’t live to see it. Lisa Boncheck Adams died March 6 at age 45.

In May the vice president’s older son, Beau — an Iraq War veteran and the former Attorney General of Delaware — died of brain cancer at age 46. Beau’s death was yet another devastating loss for the elder statesman, whose first wife, Neilia, and daughter, Naomi, died in a 1972 car accident. Until this fall, Biden had flirted with mounting a presidential bid, something comedian Stephen Colbert urged him to do during a September appearance on “The Late Show.” Colbert, who as a child lost his father and two of his brothers in a plane crash, told the Veep: “I just want to say that I think your experience and your example of suffering and service is something that would be sorely missed in the race.” But Biden ultimately decided against a presidential run, saying that, deep in grief, he had lost too much time to launch a successful bid. Watch Biden’s “Late Show” interview here:

Nine parishioners were killed on June 17, when a racist gunman opened fire during a Bible study class at Emanuel African Methodist Episcopal Church, a historically black house of worship in Charleston, South Carolina. President Barack Obama delivered a powerful eulogy for the congregation’s pastor, Clementa Pinckney, who was among those murdered. Obama’s eulogy thread together themes, such as of the role of the black church, the persistence of racial hatred and of gun violence, and the exemplary life of the late pastor. “What a good man,” Obama said, seemingly off-script. “Sometimes I think that’s the best thing to hope for when you’re eulogized — after all the words and recitations and resumes are read, to just say someone was a good man.” Watch Obama’s eulogy here:

A month after her husband, Dave Goldberg, died in a freak treadmill accident, the powerful Facebook COO took to the social media platform to explain what that rawest period of grief really feels like. And also what teaches us, like how “real empathy is sometimes not insisting that it will be okay but acknowledging that it is not” and that “resilience can be learned.” Sandberg’s Facebook essay has been shared more than 400,000 times to date. The post was republished in full on Modern Loss. Read it here. (Earlier in the year, Facebook gave us the option to choose a “legacy contact” to manage our timelines  after we die, or to turn our timelines into memorials, like this one for Goldberg.)

Mark Zuckerberg Opens Up About Miscarriage

In announcing (on his Facebook wall, where else?) that he and his wife, Priscilla Chan, were expecting a daughter, Zuckerberg also opened up about the couple’s struggles with pregnancy loss. On the road to becoming parents — their daughter Max was born on December 1 — the couple experienced three miscarriages. “Most people don’t discuss miscarriages because you worry your problems will distance you or reflect upon you — as if you’re defective or did something to cause this. So you struggle on your own,” he wrote in July. “In today’s open and connected world, discussing these issues doesn’t distance us; it brings us together. It creates understanding and tolerance, and it gives us hope.” Hear, hear.

Photo of a Syrian Refugee Child

The photograph a lifeless toddler — Aylan Kurdi’s tiny body washed ashore in Turkey, in early September — put a human face on the plight of Syrian refugees, millions of who have fled the country since the Syrian civil war began nearly five years ago. The boy’s mother and 5-year-old brother also died at sea trying to reach the Greek Island of Kos. As historian Douglas Brinkley told the Wall Street Journal: “Once in a while, an image breaks through the noisy, cluttered global culture and hits people in the heart and not the head.”

The activist movement Black Lives Matter that began with a Twitter hashtag in 2013, following the shooting death of Trayvon Martin, has grown into what The New York Times called an “Internet-driven civil rights movement.” In 2015, there were many politically significant protests in response to the deaths at the hands of law enforcement or while in police custody of Freddie Gray in Baltimore, Samuel DuBose in Cincinnati, Sandra Bland in Waller County, Texas, and Laquan McDonald in Chicago — and in response to the decision not to indict the Cleveland police officer who killed Tamir Rice, age 12. Members of Black Lives Matter movement have formed a political action committee, as well as a Super PAC, in an effort to sway elections — including the 2016 presidential race. Democratic presidential candidates Hillary Rodham Clinton and Bernie Sanders met with Black Lives Matter activists this fall, while many Republican contenders openly criticized the movement.

In October, California became the fifth state — after Oregon, Washington, Montana and Vermont — to allow terminally ill patients to end their lives. “I do not know what I would do if I were dying in prolonged and excruciating pain,” wrote Gov. Jerry Brown, in his signing statement. “I am certain, however, that it would be a comfort to be able to consider the options afforded by this bill. And I wouldn’t deny that right to others.” California’s End of Life Option Act allows the terminally ill to get prescriptions for lethal medications, should they choose to do so. The family of Brittany Maynard, who had terminal brain cancer and chose to take her own life in 2014, had lobbied in favor of the legislation. In related news, Canada’s Supreme Court in February ruled that a person with a “grievous and irremediable medical condition” has the right to doctor-assisted suicide.

A holiday party in San Bernardino, California; a community college campus in Roseburg, Oregon; a Bible study group in Charleston, South Carolina; a movie screening in Lafayette, Louisiana. The tragic thread linking these locales: mass shootings, which continue to occur with alarming regularity across the United States, but which have failed compel federal lawmakers to enact any new restrictions on firearms. Days after the San Bernardino massacre, where a husband and wife killed 14 people — apparently in the name of radical Islam — The New York Times ran its first front-page editorial in nearly a century, calling on legislators to outlaw among civilians certain types of weapons and ammunition. “It is a moral outrage,” the editorial read “and a national disgrace that civilians can legally purchase weapons designed specifically to kill people with brutal speed and efficiency.” Because, as the piece put it “motives do not matter to the dead.” Or, we should add, to those who love and miss them.