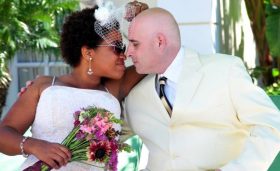 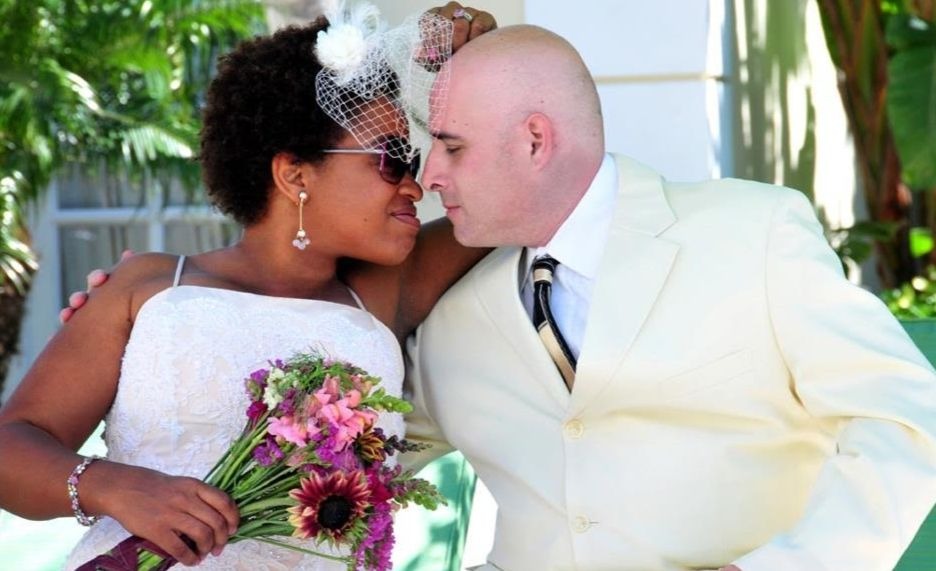 Leslie and Scott on their wedding day. (Courtesy of Leslie Gray Streeter)

There’s a line in the Grass Roots’ seminal cheating classic “Midnight Confessions” that goes, “There’s a little gold ring you wear on your hand, makes me understand/There’s another before me, you’ll never be mine/I’m wasting my time.”

I do wear a little gold ring, with some little white diamonds surrounding a medium-sized red ruby. And it does, indeed, connect me to my husband, Scott, the man who gave it to me. Well, technically, he gave it to me — but he was already dead when I got it.

A few months before Scott had a heart attack and died in my arms in the summer of 2015, the stone on my engagement ring — a tastefully pronounced pink topaz — clean popped out from its setting on a very short and slow run around our neighborhood. Several re-tracings of my steps were not fruitful.

Our Double-Widowed ‘I Love You’

Scott was horrified and wanted to run out immediately to replace it, but I told him not to sweat it. We had a baby, two car payments, and a lot going on.  It was just a ring, a symbol of the life we had. But I didn’t need that symbol just then. I still had my wedding band and I still had Scott. It could wait until Christmas.

But by Christmas, not only did I still not have that fancy new ring — I’d hoped to upgrade from tastefully pronounced to blissfully obnoxious — I didn’t have Scott anymore. I’d lost the love of my life, the father of my child, and the person who watched “Rudolph The Red-Nosed Reindeer” with me and heckled all of the other reindeer for their bullying. (“Santa was a dick,” Scott said once.) 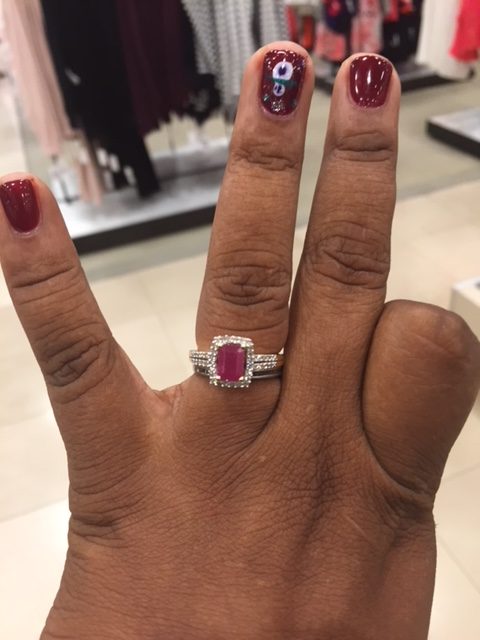 All I had left — aside from a confused toddler and a world of hurt — was a finger whose tan line betrayed the absence of something significant above my now-lonely white gold band. No, wait, I realized. I also had some life insurance money. Not enough to move, carefree, to convalesce in Aruba or trigger the suspicions of anyone on “Dateline NBC.” But enough, after paying the bills, for a ring. Not a crazy Beyonce-level thing, but something grander than the one I’d forever lost on my run.

And since it was from Scott’s life insurance, it was still from him. It was not how I wanted to get it. But I needed it. I felt cosmically compelled to acquire it. I couldn’t give Scott everything he wanted in his life, including a longer one. But he was a guy who kept his promises, and buying that ring felt like helping him fulfill his final one.

As I was handed my new ring by the man behind the fancy Macy’s jewelry counter, the one I usually bypassed on my way to the cheaper stuff, I wanted to snatch it from him in a way that might have gotten me Tazed. I felt like black Gollum, y’all. It was THE RING, My Precious, and I had to have it. I remember sliding it on top of my wedding band, pressing it down to see if it fit.

It did. Welcome home, Ring.

For the first few months, when I still felt so untethered and so married, I used it to deflect strangers who mistook my quiet morose nature for playing hard to get. I would twist it compulsively around my finger to feel its smooth grooves and peaks, like a ritual, like a salve. I would breathe deeply and I would feel Scott with me, even though his fingers never touched it.

Three Christmases have passed since I lost my Scott and gained that ring, and I still wear it. On the one-year anniversary of Scott’s death, I moved it from my left hand to my right. I don’t need it quite the way I used to, to help me breathe. Breathing is easier. And I’ll probably take it off soon. I guess. Maybe I’ll even get another ring one day.

But for the moment, this is My Ring. When I touch it, it’s still almost like Scott holding my hand. Not enough like that, but it’s something.

Leslie Gray Streeter is a columnist for the Palm Beach Post in West Palm Beach, Florida. She has written extensively about entertainment and lifestyle issues, including the subject of loss, following the deaths of her father and her husband, Scott. She has also been a featured speaker at “Camp Widow,” an international convention for those who have lost partners.