An Ice Cream Truck at the Funeral

And 6 other meaningful ways to incorporate food — and cocktails — into a memorial. We mark life’s milestones with festive food and rituals. And culinary traditions can play an important role for mourners, too. Here are 7 ideas for meaningful ways to incorporate food and drink into a memorial.

Personalized, or ‘signature’ custom cocktails (or non-alcoholic mocktails) and craft beers celebrating the unique personalities are increasingly popular at weddings. And they make sense for funerals, too. A special drink, named after and inspired by a loved one, could be served during a toast or at a time when friends and family are invited to share a memory of the deceased. Later, the recipe can be given out to guests. That custom cocktail can be prepared on the deceased birthday or their “deathiversary” — or anytime, really. 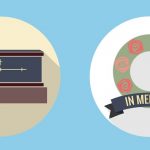 It’s Your Funeral: 10 Ways to Hack the Planning 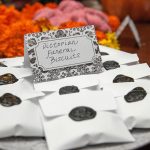 There are numerous cultures around the world that incorporate a special sweet dish or candy into their funeral rituals or feasts to remind mourners that, even amid grief, life is sweet. An envelope with candy may be passed around at Chinese funerals, for example. A great twist on this important sentiment — and I wouldn’t mind incorporating into my own funeral — is the well-timed appearance of an ice cream truck, leaving my loved ones with their last memory of me being one that’s sweet.

On particularly difficult days — like Mother’s Day and Father’s Day — one way I honor my grief (and the memory of those I’ve lost) is by making rosemary tea bread. Rosemary is an herb of remembrance. The Romans used it in burial rites. Shakespeare references it in “Hamlet”: “Ophelia in her madness names plants that were known for their capacity to ease pain, particularly inwardly felt pain” — “There’s rosemary, that’s for remembrance; pray, love, remember.” Here’s a recipe.

Funeral biscuits were paper-wrapped cookies handed out to mourners at funerals or taken door-to-door as an invitation to a funeral. The biscuits first made their appearance in 1600s Europe and were commonplace in America through the early 1900s. The wrappers were custom printed with a poem or prayer and the name of the deceased. Although edible, the biscuits were often kept as keepsakes. A modern version can easily be adapted and created with the help of children, who are so often left out of these important rituals and are seeking a way to express their own grief. Children can decorate the wrapper, and even help with the baking. Here’s a recipe.

Danielle Oteri, the mastermind behind the foodie website Feast On History, creates custom family cookbooks. Here’s how it works: Oteri’s company, according to its website, will “look at census records and immigration documents. We’ll conduct interviews with you and/or your family members and record the memories and meals that were shared. Next, we’ll research those recipes and delve deep to find out exactly where your relatives came from and what influenced their cooking. Finally, we thoroughly test the recipes and record them so that these wonderful traditions will never again be lost.” Amazing, right? Funeral florist extraordinaire Cassandra Thompson of Stems UK created a stunning memorial wreath made with vegetables. It’s a meaningful tribute for a loved one who enjoyed gardening. You could even use vegetables from their own garden. Another idea for those mourning the loss of a beloved gardener — seeds or plantings could be harvested from their garden to be distributed and replanted  .

If you’ve been to a wedding in the past few years, chances are you’ve been handed a wedding program, featuring photographs of the happy couple, factoids about how they met, details about their families or the story of their first date. Little booklets like these can frequently be found in Thailand as well, but at funerals — not weddings. In Thailand, these memorial books, called nang sue ngam sop, are typically written by the family of the deceased, and contain photographs from graduations, weddings or personal stories and anecdotes. A hallmark of these books are favorite recipes of dishes they were known for cooking (or for enjoying). In fact, recipes from Thai funeral books were the main inspiration for Chef David Thompson’s Nham restaurant, which earned a coveted Michelin Star – the first for Thai cuisine.

Sarah Troop writes and recreates historical and cultural recipes for her blog, Nourishing Death, which examines the relationship between food and death in rituals, culture, religion and society. She is a member of The Order of the Good Death and the Social Media Editor for Death Salon. She wrote previously for Modern Loss about how the world marks death with food.

Tags: Food and Recipes, Funerals and Memorials, How To
Published on August 6, 2015