Dad’s Voice in the ‘Tower of Song’

The last time I spoke to my father, the subject was, of all things, Leonard Cohen — the musician my dad believed brought ‘punctuation to experience.’ 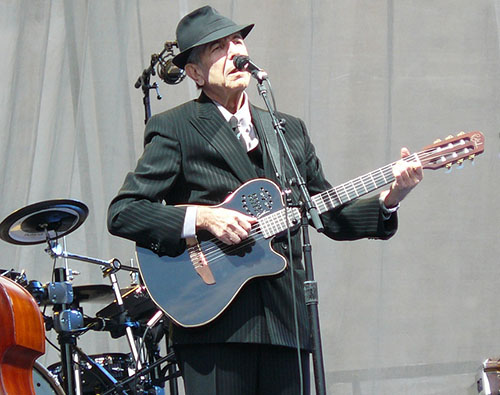 The last time I ever talked to my father, we talked about Leonard Cohen.

Growing up, my dad was the only person I knew who listened to Leonard Cohen. I thought he was probably the only person in the world who liked the musician my sister and I had written off as a drunk-sounding wannabe poet.

I don’t remember when Leonard Cohen became something to take more seriously. Maybe it was after watching “Pump Up the Volume” and hearing his “Everybody Knows” blaring as the theme song for Christian Slater’s radio show? But by the time I finished high school in 1999, Leonard Cohen had worked his way into my graduation speech.

I didn’t know that phone call would be our last. My father had been having a hard time breathing, so our phone calls had been much shorter than usual. But on that Thursday, we talked for half an hour. He told me stories he’d heard about inept criminals. And he told me that when he listened to Leonard Cohen the other day, he kept thinking that I could do that, that I could write songs.

My father had always been a strong supporter of my writing, though sometimes he seemed scared of it, like he wanted to sift through it for clues about me. On more than one occasion, he brought up things I’d written in fictional short stories and said that people might hold those things against me. Like he assumed they’d all really happened.

I thought about what it meant to be a writer, and then what it meant to write songs, the joy and the burden. I thought specifically of Leonard Cohen’s “Tower of Song.” My favorite part of it is the amateur-sounding keyboard line. It sounds like it’s being played on a department store keyboard you’d buy your fourth-grader for Christmas. When I saw Cohen in concert, that’s what the keyboard he used looked like, too. He tapped out the notes, and when we applauded made a few jokes at his own expense before playing with his elbow.

I don’t think my father knew either that our last conversation was indeed our last, though of course I’ve wondered if he had an inkling. In that last conversation, my father said, “I was listening to Leonard Cohen the other day. And I thought how you could do that. You have the talent. You could write songs. You have the talent.” I wasn’t sure what to say to that. I thought of explaining that people like Leonard Cohen were so much more than just talent.

Which my father knew. Of course. I found this in an email he’d sent to me last year:

I think Leonard represents both context and passion….

he is not the Beach Boys……

some people have food just to have food,

to others it’s an experience…..

and Leonard brings punctuation to experience….

the contextual background, the resonance, to history and to life……Prince Charles likes Leonard, which makes me like Prince Charles more

My mother really wanted to use Sinatra’s “My Way” in the memorial. I suggested a Leonard Cohen song instead. I didn’t tell my mother how I’d read that “My Way” was the song most often played at funerals. It was a cliché. My father was not a fan of clichés. During one of the memorial speeches, one of my father’s friends said that he “marched to the beat of a different drummer.” I almost burst out laughing, especially when he followed it up by saying my father thought “outside the box.”

We didn’t end up using either song. My sister, who was on the verge of finishing seminary then, organized the service. She, my mother and I agreed the hymns and readings should celebrate nature and not be too churchy. I read an excerpt from Whitman’s “Song of Myself” My father had written his master’s thesis on Whitman. At the podium in the church, I read: “My respiration and inspiration, the beating of my heart, the passing of blood and air through my lungs.”

The day after my father died — the first day I’d spent in a world without him — I told myself I had to get out of bed and walk to the store. I put on my headphones and found a Leonard Cohen album, going right to “Tower of Song.” And, there, the plinked out-piano riff. That moment of earnest levity made me smile. I thought of how, when my mother had called to tell me the news, she said “He’s in your heart. He’s in your heart.” And that’s a cliché, too, but he is. There in the cheap keyboard melody, there keeping watch over me in the tower of song.

Erin Lyndal Martin is a creative writer, music journalist, and visual artist. She received her MFA in poetry at the University of Alabama. Recently, her work has appeared in No Depression, Salon, and Gigantic Sequins.